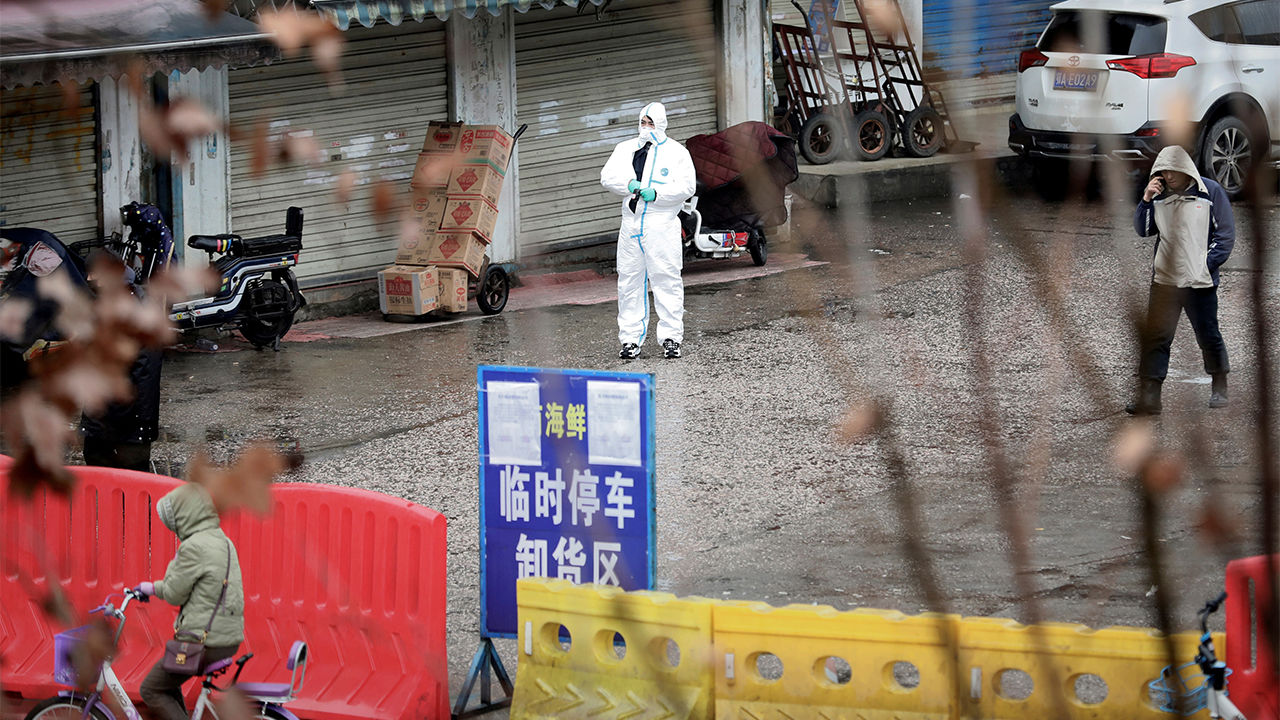 The Huanan seafood market in Wuhan has been widely considered the source of the outbreak of a novel coronavirus. But the virus may have infected people elsewhere first. REUTERS

As confirmed cases of a novel virus surge around the world with worrisome speed, all eyes have so far focused on a seafood market in Wuhan, China, as the origin of the outbreak. But a description of the first clinical cases published in The Lancet on Friday challenges that hypothesis.

The paper, written by a large group of Chinese researchers from several institutions, offers details about the first 41 hospitalized patients who had confirmed infections with what has been dubbed 2019 novel coronavirus (2019-nCoV). In the earliest case, the patient became ill on 1 December 2019 and had no reported link to the seafood market, the authors report. “No epidemiological link was found between the first patient and later cases,” they state. Their data also show that, in total, 13 of the 41 cases had no link to the marketplace. “That’s a big number, 13, with no link,” says Daniel Lucey, an infectious disease specialist at Georgetown University.

Earlier reports from Chinese health authorities and the World Health Organization had said the first patient had onset of symptoms on 8 December 2019—and those reports simply said “most” cases had links to the seafood market, which was closed on 1 January.

Lucey says if the new data are accurate, the first human infections must have occurred in November 2019—if not earlier—because there is an incubation time between infection and symptoms surfacing. If so, the virus possibly spread silently between people in Wuhan—and perhaps elsewhere—before the cluster of cases from the city’s now-infamous Huanan Seafood Wholesale Market was discovered in late December. “The virus came into that marketplace before it came out of that marketplace,” Lucey asserts.

The Lancet paper’s data also raise questions about the accuracy of the initial information China provided, Lucey says. At the beginning of the outbreak, the main official source of public information were notices from the Wuhan Municipal Health Commission. Its notices on 11 January started to refer to the 41 patients as the only confirmed cases and the count remained the same until 18 January. The notices did not state that the seafood market was the source, but they repeatedly noted that there was no evidence of human-to-human transmission and that most cases linked to the market. Because the Wuhan Municipal Health Commission noted that diagnostic tests had confirmed these 41 cases by 10 January and officials presumably knew the case histories of each patient, “China must have realized the epidemic did not originate in that Wuhan Huanan seafood market,” Lucey tells ScienceInsider. (Lucey also spoke about his concerns in an interview published online yesterday by Science Speaks, a project of the Infectious Disease Society of America.)

Kristian Andersen, an evolutionary biologist at the Scripps Research Institute who has analyzed sequences of 2019-nCoV to try to clarify its origin, says the 1 December timing of the first confirmed case was “an interesting tidbit” in The Lancet paper. “The scenario of somebody being infected outside the market and then later bringing it to the market is one of the three scenarios we have considered that is still consistent with the data,” he says. “It’s entirely plausible given our current data and knowledge.” The other two scenarios are that the origin was a group of infected animals or a single animal that came into that marketplace.

Andersen posted his analysis of 27 available genomes of 2019-nCoV on 25 January on a virology research website. It suggests they had a “most recent common ancestor”—meaning a common source—as early as 1 October 2019.

Bin Cao of Capital Medical University, the corresponding author of The Lancet article and a pulmonary specialist, wrote in an email to ScienceInsider that he and his co-authors “appreciate the criticism” from Lucey.

“Now It seems clear that [the] seafood market is not the only origin of the virus,” he wrote. “But to be honest, we still do not know where the virus came from now.”

Lucey notes that the discovery of the coronavirus that causes Middle East respiratory syndrome, a sometimes fatal disease that occurs sporadically, came from a patient in Saudi Arabia in June 2012, although later studies traced it back to an earlier hospital outbreak of unexplained pneumonia in Jordan in April 2012. Stored samples from two people who died in Jordan confirmed they had been infected with the virus. Retrospective analyses of blood samples in China from people and animals—including vendors from other animal markets—may reveal a clear picture of where the 2019-nCoV originated, he suggests. “There might be a clear signal among the noise,” he says.

Importation and Human-to-Human Transmission of a Novel Coronavirus in Vietnam January 28, 2020 The emergence and spread of a…