By KIM TONG-HYUNG and MATT SEDENSKY 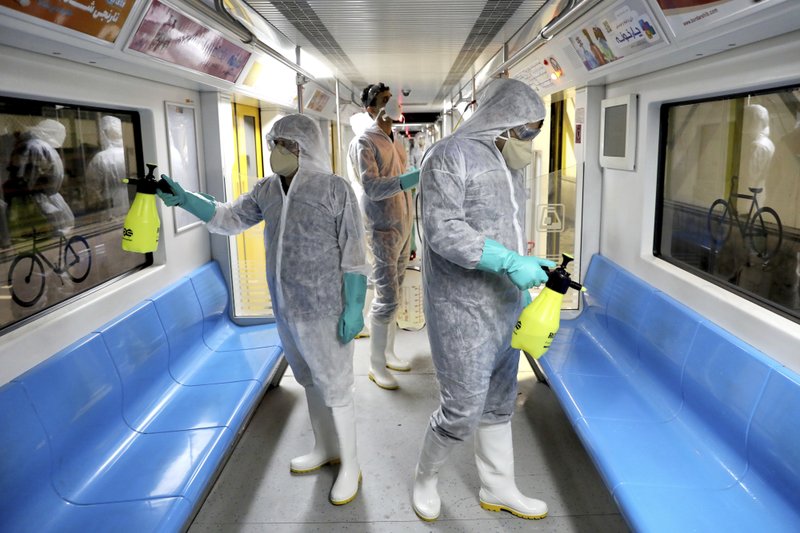 Workers disinfect subway trains against coronavirus in Tehran, Iran, in the early morning of Wednesday, Feb. 26, 2020. Iran's government said Tuesday that more than a dozen people had died nationwide from the new coronavirus, rejecting claims of a much higher death toll of 50 by a lawmaker from the city of Qom that has been at the epicenter of the virus in the country. (AP Photo/Ebrahim Noroozi)

SEOUL, South Korea (AP) — Crews scrubbed everything from money to buses, military bases were on high alert and quarantines were enforced Wednesday from a beachfront resort in the Atlantic to a remote island in the Pacific, as the world worked to halt the fast-spreading virus that for the first time counted more new cases outside China than inside the country, where the epidemic originated.

Worries over the ever-expanding economic fallout of the COVID-19 crisis multiplied, with factories idled, trade routes frozen and tourism crippled, while a growing list of nations braced for the illness to breach their borders. Even the Olympics, five months away, wasn’t far enough off to keep people from wondering if it would go on as planned.

“We don’t expect a miracle in the short term,” said Kianoush Jahanpour of the health ministry in Iran, where an official tally of infections of 139 was doubted by some who thought the problem was far bigger.

The World Health Organization, meanwhile, reported that the number of new cases outside China on Tuesday exceeded the number of new infections inside the country for the first time. The number in China was 412, while the tally in the rest of the world was 459.

“The sudden increases of cases in Italy, the Islamic Republic of Iran and the Republic of Korea are deeply concerning,” WHO director-general Tedros Adhanom Ghebreyesus said Wednesday.

About 81,000 people around the globe have been sickened by the coronavirus that kept finding new targets. With Brazil confirming the arrival of Latin America’s first case, the virus had a toehold on every continent but Antarctica.

In Europe, where Germany, France and Spain were among the places with a growing caseload, an expanding cluster of more than 440 cases in northern Italy was eyed as a source for transmissions. In the Middle East, where cases increased in Bahrain, Kuwait and Iraq, blame was directed toward Iran. In Asia, where the crisis originated late last year in China, threats continued to emerge around the region, with South Korea battling a mass outbreak centered in the 2.5 million-person city of Daegu.

And in the United States, which has 60 cases, President Donald Trump declared that the U.S. was “very, very ready” for whatever threat the coronavirus brings, and he put Vice President Mike Pence in charge of overseeing the country’s response. Shortly after Trump spoke, health officials in the U.S. confirmed a new case of coronavirus infection in California that could be the first instance of the virus spreading in a U.S. community. The patient in California was not known to have traveled to a country with an outbreak, or be connected to a known patient.

The illness had now spread to at least 39 countries, said world health officials, who simultaneously cautioned against the risks of unnecessary fears or stigma.

“We are in a fight that can be won if we do the right things,” WHO chief Ghebreyesus said.

Though the virus pushed into countries both rich and poor, its arrival in places with little ability to detect, respond and contain it brought concern it could run rampant there and spread easily elsewhere.

“We’re going to be trying to slow down the spread so that our hospitals are not overwhelmed in one big gulp, one big hit,” said Ian Mackay, who studies viruses at the University of Queensland in Australia.

Saudi Arabia announced a series of precautionary measures, including temporarily stopping tourists from places with confirmed outbreaks from entering the country, as well as pilgrims coming for the Umrah or to visit the Prophet’s Mosque in Medina.

Around the world, as Christians marked the start of the holy season of Lent with Ash Wednesday, worshipers found churches closed and rituals changed by virus fears. Even in St. Peter’s Square, many of those gathered for Pope Francis’ weekly audience wore face masks and clergy appeared to refrain from embracing the pontiff or kissing his ring.

Services in Singapore were broadcast online to keep people from crowded sanctuaries where germs could spread, bishops in South Korea shuttered churches for what they said was the first time in the Catholic Church’s 236-year history there, and in Malaysia and the Philippines, ashes were sprinkled on the heads of those marking the start of Lent instead of using a damp thumb to trace a cross of ashes.

“We would like to be cautious so that the coronavirus will not spread,” said the Rev. Victorino Cueto, rector of the National Shrine of our Mother of Perpetual Help in Manila in the Philippines.

Major gatherings were eyed warily, with organizers scrambling to respond in the face of the epidemic. Looming largest of all are the Olympic Games, whose opening ceremonies are scheduled for July 24 in Tokyo. A member of the International Olympic Committee, Richard Pound, sounded alarms a day earlier, saying the virus could force a cancellation of the games. The Japanese government, in turn, gave mixed signals, insisting they would go forward yet urging that sports events be curtailed for now.

Prime Minister Shinzo Abe called for major sports and cultural events in the coming two weeks to be canceled or postponed to stem further infections. Meanwhile, the top government spokesman said Olympics preparations would proceed and the games would go on as planned.

Among the other crowded places that had officials worried: Military bases.

The South Korean military announced additional infections among its troops, with 20 cases on its bases and some 9,570 people in isolation. The U.S. military, which has 28,500 troops in South Korea, confirmed the first infection of an American soldier, a 23-year-old man based at Camp Carroll near Daegu, a day after the Americans said a military spouse also had contracted the illness. Bowling alleys, movie theaters and a golf course on four American bases in the country were closed.

“This is a setback, it’s true, there’s no getting around that. But it’s not the end of the war,” Col. Edward Ballanco, commander of the U.S. Army Garrison Daegu told troops in a video message. “We are very well equipped to fight this thing off.”

Italy recorded 78 new infections on Wednesday and Greece, North Macedonia and Romania became the newest countries to see a case of the virus. South Korea announced 284 new cases, largely in Daegu, bringing its total to 1,261. China, still the epicenter of the crisis even as new outposts caught the world’s attention, reported 406 new cases and 52 more deaths. The country has a total of 78,604 cases of the virus and 2,715 fatalities.

China said Wednesday that those sickened by the virus included 555 prisoners who officials said likely became infected by guards using the same bus station as a nearby pulmonary hospital. In a twist, China is now heavily regulating arrivals from abroad, with authorities placing South Koreans under monitoring, state broadcaster CCTV reported, after five people on a flight showed signs of fever. 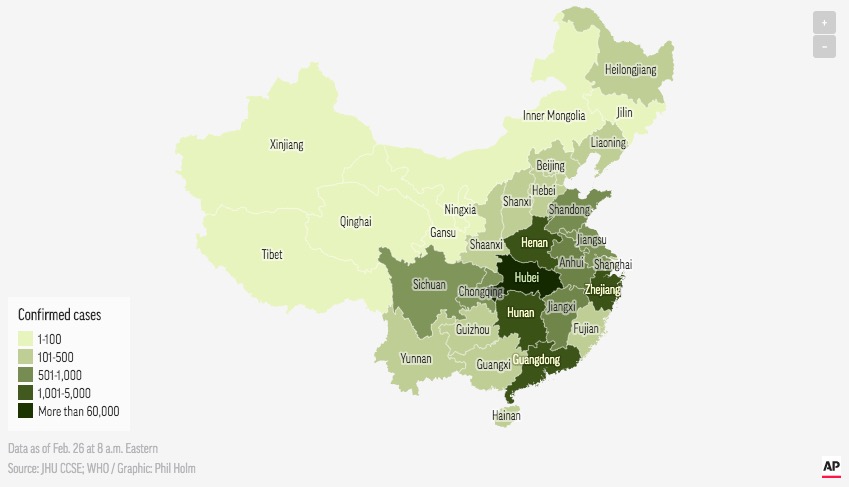 Indonesia said it evacuated 188 crew members from the World Dream cruise ship and planned to take them to remote Sebaru Island. The workers were released from quarantine in Hong Kong after finding no infections, but authorities mandated an additional observation period.

And on the opposite side of the world, the MSC Meraviglia was denied permission to land in Grand Cayman, where it was due to arrive Wednesday, following a decision by Jamaica to refuse it entry. The cruise line expressed frustration with the moves, which came after it reported one crew member from the Philippines was sick with common seasonal flu.

It brought reminders of the MS Westerdam, which was repeatedly denied entry to Asian ports before Cambodia welcomed its passengers.

MSC Cruises said the Meraviglia was sailing onward to Mexico.