Researchers are studying the effects of China's lockdowns to glean insights about controlling the viral pandemic. 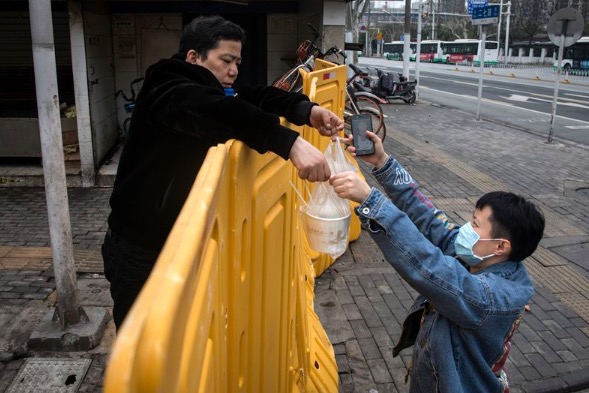 Social distancing has been used to halt the transmission of the coronavirus in China.Credit: Getty

As the new coronavirus marches around the globe, countries with escalating outbreaks are eager to learn whether China’s extreme lockdowns were responsible for bringing the crisis there under control. Other nations are now following China’s lead and limiting movement within their borders, while dozens of countries have restricted international visitors.

In mid-January, Chinese authorities introduced unprecedented measures to contain the virus, stopping movement in and out of Wuhan, the centre of the epidemic, and 15 other cities in Hubei province — home to more than 60 million people. Flights and trains were suspended, and roads were blocked.

Soon after, people in many Chinese cities were told to stay home and venture out only to get food or medical help. Some 760 million people, roughly half the country’s population, were confined to their homes, according to the New York Times.

It’s now two months since the lockdowns began — some of which are still in place — and the number of new cases there is around a couple dozen per day, down from thousands per day at the peak. “These extreme limitations on population movement have been quite successful,” says Michael Osterholm, an infectious-disease scientist at the University of Minnesota in Minneapolis.

In a report released late last month, the World Health Organization congratulated China on a “unique and unprecedented public health response [that] reversed the escalating cases”.

But the crucial question is which interventions in China were the most important in driving down the spread of the virus, says Gabriel Leung, an infectious-disease researcher at the University of Hong Kong. “The countries now facing their first wave [of infections] need to know this,” he says.

Nature talked to epidemiologists about whether the lockdowns really worked, if encouraging people to avoid large gatherings would have been enough, and what other countries can learn from China’s experience.

What happened after the lockdowns?

Before the interventions, scientists estimated that each infected person passed on the coronavirus to more than two others, giving it the potential to spread rapidly. Early models of the disease’s spread, which did not factor in containment efforts, suggested that the virus, called SARS-CoV2, would infect 40% of China’s population — some 500 million people.

But between 16 and 30 January, a period that included the first 7 days of the lockdown, the number of people each infected individual gave the virus to dropped to 1.05, estimates Adam Kucharski, who models infectious-disease spread at the London School of Hygiene and Tropical Medicine. “That was amazing,” he says.

The number of new daily infections in China seems to have peaked on 25 January — just 2 days after Wuhan was locked down.

As of 16 March, roughly 81,000 cases have been reported in China, according to WHO. Some scientists think that many cases there were unreported — either because symptoms were not severe enough for people to seek medical care, or because tests were not carried out. But it seems clear that measures implemented during this time did work, says Christopher Dye, an epidemiologist at the University of Oxford, UK. “Even if there were 20 or 40 times more cases, which seems unlikely, the control measures worked,” says Dye.

Could China’s response have worked better?

Epidemiologists say China’s mammoth response had one glaring flaw: it started too late. In the initial weeks of the outbreak in December and January, Wuhan authorities were slow to report cases of the mysterious infection, which delayed measures to contain it, says Howard Markel, a public-health researcher at the University of Michigan in Ann Arbor. “The delay of China to act is probably responsible for this world event,” says Markel.

A model simulation1 by Lai Shengjie and Andrew Tatem, emerging-disease researchers at the University of Southampton, UK, shows that if China had implemented its control measures a week earlier, it could have prevented 67% of all cases there. Implementing the measures 3 weeks earlier, from the beginning of January, would have cut the number of infections to 5% of the total.

A church in Wuhan is sprayed with disinfectant. Credit: Feature China/Barcroft Media/Getty

Data from other cities also show the benefits of speed. Cities that suspended public transport, closed entertainment venues and banned public gatherings before their first COVID-19 case had 37% fewer cases than cities that didn’t implement such measures, according to a preprint2 by Dye on the containment measures used in 296 Chinese cities.

Multiple analyses of air travel suggest that the Hubei travel bans, which stopped people leaving the province on planes, trains or in cars, slowed the virus’ spread, but not for long3. A 6 March study4 published in Science by scientists in Italy, China and the United States found that cutting off Wuhan delayed disease spread to other cities in China by roughly four days.

The bans had a more lasting effect internationally, stopping four of five cases from being exported from China to other countries for two to three weeks, the team found. But after that, travelers from other cities transported the virus to other international cities, seeding new outbreaks. The team’s model suggests that even blocking 90% of travel slows the virus’ spread only moderately unless other measures are introduced.

Since travel bans can only slow the spread of this type of disease, it's important that bans be implemented in a way that encourages trust, says Justin Lessler, an epidemiologist at Johns Hopkins University in Baltimore. “If you encourage people to lie or try to circumvent the ban, it is destined to fail,” he says.

Dozens of countries across Europe, the Americas and Africa and Asia have now introduced travel restrictions.

Although the World Health Organization warns against them, saying they aren’t usually effective in preventing an infection’s spread, and they could divert resources from other more helpful measures and block aid and technical support, in addition to harming many industries.

What are the lessons for other countries?

Tatem and Lai’s model assesses the combined effect of China's early detection and isolation, the resulting drop in contact between people and the country's intercity travel bans on reducing the virus' spread. Together, these measures prevented cases from increasing by 67-fold — otherwise, there would have been nearly 8 million cases by the end of February.

The effect of the drop in contact between people was significant on its own. Using mobile-phone location data from Chinese internet giant Baidu, the team found a dramatic reduction in people’s movements, which they say represents a huge drop in person-to-person contact. Without this decrease, there would have been about 2.6 times as many people infected at the end of February, the pair says.

Early detection paid off for Singapore. The country was one of the quickest to identify cases, as doctors had been warned to look out for a ‘mysterious pneumonia’, says Vernon Lee, who heads the communicable-disease response team for Singapore’s health ministry. As the first cases popped up in Singapore, doctors promptly identified and isolated those people and started contact tracing, says Lee.

The country still has under 250 COVID-19 cases, and it didn’t need to introduce the drastic movement restrictions used in China. Some events have been cancelled, people with COVID-19 are being quarantined and temperature screening and other community measures are in place, says Lee. “But life is still going on,” he says.

The impact of school closures in China is unknown. A preprint study5 of the spread of COVID-19 in Shenzhen has found that although children are just as likely to be infected as adults, it is still not clear whether children, many of whom don’t show symptoms, can transmit the virus. “This will be critical in evaluating the impact of school closures,” says Lessler, the co-author of the study.

Are COVID cases coming to an end in China?

New cases of COVID-19 have slowed dramatically in China, but some fear that once the country fully eases its control measures, the virus could start circulating again. It could even be reintroduced into China from the countries now experiencing outbreaks. Because China’s measures protected so many people from infection, a large pool of people have no immunity against the virus, says Leung.

China is suppressing the virus, not eradicating it, says Osterholm. The world will need to wait until about eight weeks after China resumes to some form of normality to know what it did or didn’t accomplish with its population-movement limitations, he says .

There is probably a fierce debate going on in China about when to relax the lockdown measures, says Roy Anderson, an epidemiologist at Imperial College London. He suggests there could be a second wave of new infections when they are lifted.

Lockdowns have to end at some point, and government’s should remind people to maintain social distancing and good hygiene, says Anderson. “It’s our actions more than government measures that will matter,” he says.

Trapped in amber, this could be the smallest dinosaur ever found By Laura Geggel The skull is all that's…