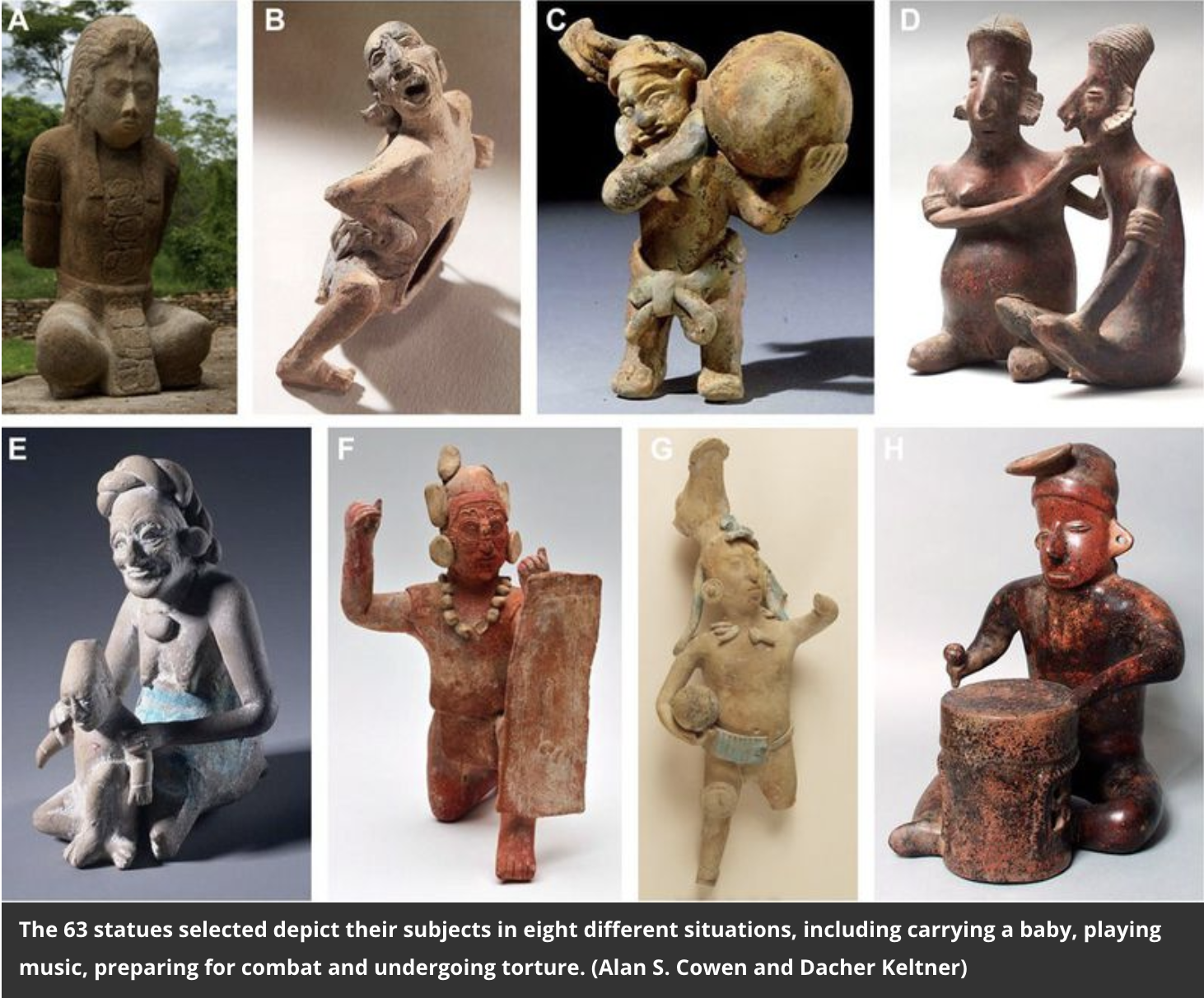 Researchers have long debated whether humans use universal facial expressions to display emotion. Now, a study of ancient Mesoamerican sculptures offers a new take on the age-old question, suggesting that expressions of emotions such as pain, happiness and sadness transcend both time and culture. (It’s worth noting, however, that several experts not involved in the research have raised questions regarding the findings, per Bruce Bower of Science News.)

To analyze the universality of facial expressions, psychologist Dacher Keltner and computational neuroscientist Alan Cowen, both of the University of California, Berkeley, scoured thousands of statues created prior to Europeans’ arrival in the Americas. After selecting 63 works that depicted their subjects in eight scenarios—among others, holding a baby, preparing for combat, playing music and undergoing torture—the pair asked two sets of volunteers to characterize the sculptures’ emotional states.

Keltner and Cowen presented 114 participants with verbal descriptions of the statues’ situations. The other 325 volunteers assessed the sculptures’ emotions based on cropped images of the subjects’ faces. Both groups “interpreted the sculptures in a similar way to how the Western, English-speaking world would expect someone to feel in that scene,” writes Carly Cassella for Science Alert.

The results—published earlier this month in the journal Science Advances—“provide support for the universality of at least five kinds of facial expression: those associated with pain, anger, determination/strain, elation, and sadness,” according to the paper.

Previous research on universal facial expressions has centered largely on similar responses by people from different modern communities. These studies seems to suggest that individuals across cultures classify emotions in similar ways—but the fact that many non-Western communities have interacted with Western cultures (often through colonialism) raises the possibility that participants share surveyors’ understanding of facial expressions not because they’re universal human knowledge, but because they were introduced to the culture in recent history.

“Research showing cultural differences in the expression and recognition of emotions has suggested that facial expressions may not be universal after all,” explains Megan Willis, a psychologist at Australian Catholic University, for the Conversation. “Critics have suggested research on universality often uses methods that may inflate the accuracy of results.” 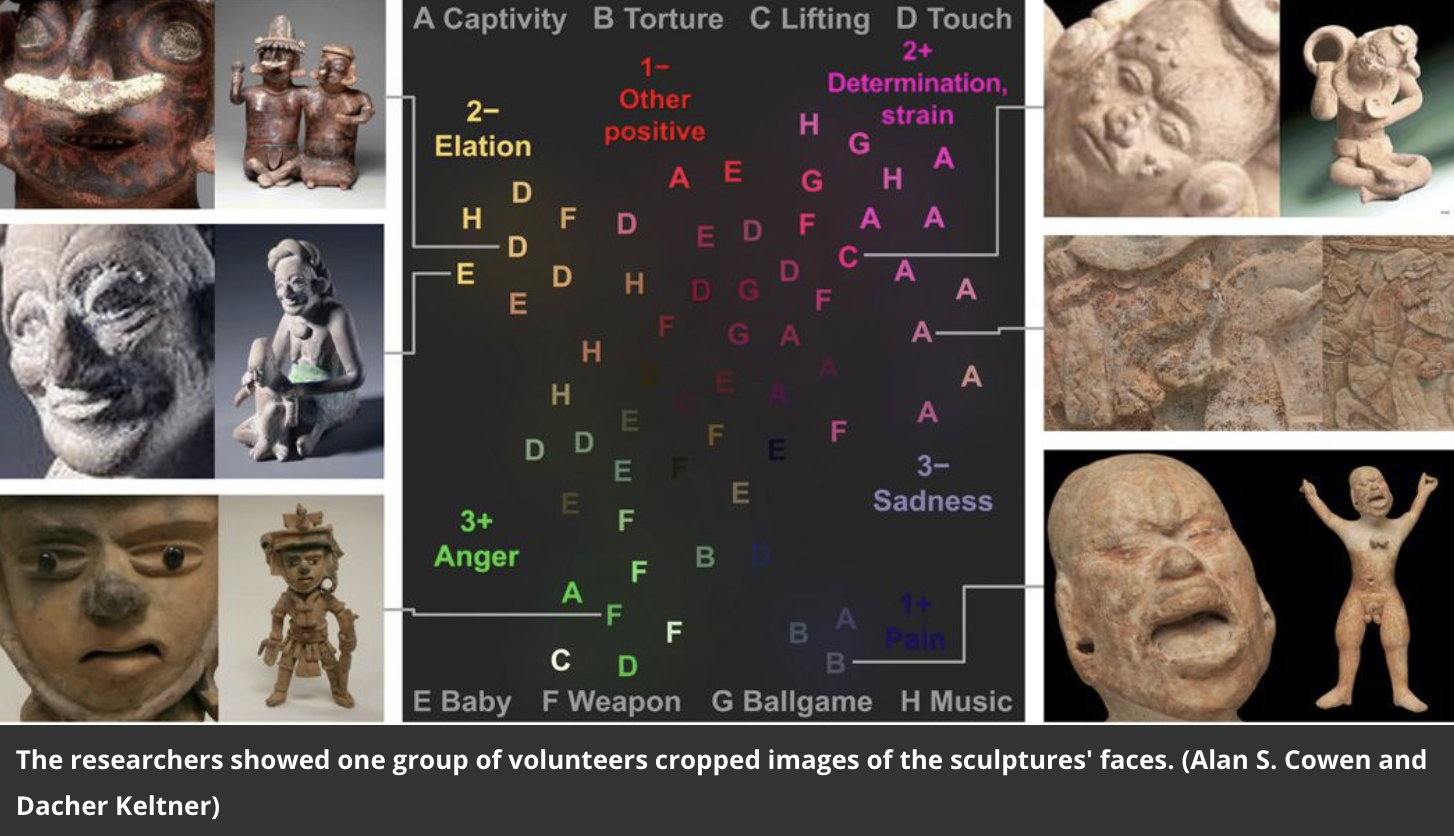 Overall, the emotions reported by volunteers presented with visual and verbal cues appeared to align with what the researchers expected given the situations portrayed.

This apparent connection between ancient sculptors and modern volunteers “provides strong support for universality and genetic origins of these [particular] emotion expressions,” Jessica Tracy, a psychologist at the University of British Columbia in Vancouver, tells Science News.

But other experts have raised concerns regarding the authenticity of the sculptures analyzed in the paper. Though the scientists consulted a curator of ancient American art when choosing the 63 artworks, forgeries of Mesoamerican sculpture are relatively common.

Additionally, writes Willis for the Conversation, “It’s unclear whether the artistic portrayals are true to the lives and emotional experiences of the people portrayed. That is, the artworks may not provide a direct insight into the emotions of ancient Americans.”

Are recessions always a bad thing?

Is there such a thing as a ‘good’ or ‘bad’ recession? By William Park How can the economic outlook…

Can't be away from your phone? Study finds link to higher levels of obsession-compulsion Feelings of panic when a…