Everything You Need to Know About Herd Immunity

It’s the ultimate goal, but attaining it can be difficult (and deadly) 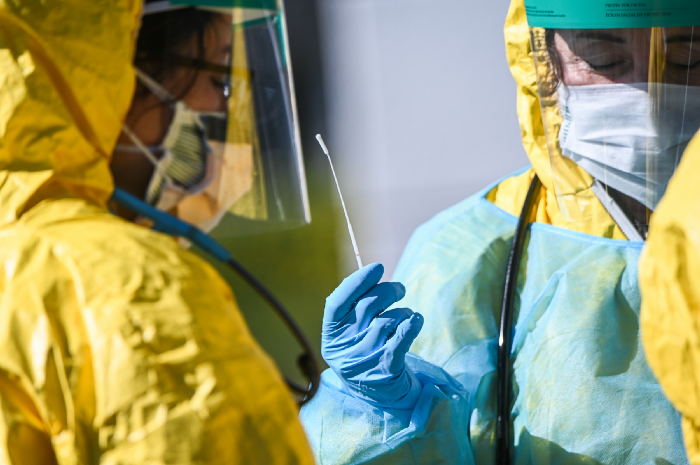 By now you’ve heard lots of talk about herd immunity to Covid-19 — perhaps the hope that it will be key to getting life back to some semblance of normalcy. Or, maybe you’ve heard striving for herd immunity “would be a disaster” that causes millions of deaths. So which is it?

It’s actually both. For that to make sense, you need to understand what herd immunity is, how a population reaches it, and the risks of getting there only through infections.

What is herd immunity?

The basic concept of herd immunity is pretty straightforward: The more people in a population who are immune to a disease, the harder it is for that disease to spread through the community. For example, if none of the 1,000 residents in a small town were immune to measles and someone sick with measles visited, about 900 townspeople would likely end up with measles — the disease would rage through the town like wildfire.

But if 93% to 95% of the town were immune to measles, either because they had it as children or because they had been vaccinated, possibly no one would get sick. Even if some of the 50–70 nonimmune people had direct contact with the infectious visitor, the town wouldn’t see an outbreak: The high proportion of immune townspeople would protect most of those 50–70 vulnerable folks. How do they do that? They basically insulate the unprotected people. Viruses seek hosts to allow them to replicate and then find the next host. If all the virus encounters are immune people, it has nowhere to go. As long as the nonimmune people are randomly spread throughout the town, the virus has a lower chance of finding them. Even if it finds a couple of them, they won’t be able to pass it on to many others if they’re mostly surrounded by immune people. The virus can’t reach everyone if not enough people can become infected to keep passing along the disease. (That said, if those 50–70 people all attend the same house of worship and the infected visitor visits that service, chances are there will be an outbreak affecting most of the nonimmune people in town — we’ll get to that.)

Where did that 93% to 95% — the threshold experts estimate as necessary to achieve herd immunity for measles — come from? It’s based on how contagious a disease is and how long infected people are contagious. Those two factors determine the basic reproductive number, or R0 (pronounced “R-nought”), of a disease. The R0 is how many susceptible individuals a single person with the disease typically infects while contagious. Measles is extremely contagious, with an R0 of 12 to 18, so it requires a high percentage of the population to be immune to prevent transmission.

Stopping transmission in a population requires reducing the R0 to less than one. Interventions such as social distancing, quarantining sick people, and vaccination can all help reduce it. Scientists haven’t nailed down the R0 of Covid-19, but they estimate it around two to three, with some estimates a little lower and some a little higher. That means somewhere between 60% to 80% of the population needs immunity to Covid-19 to reach herd immunity. 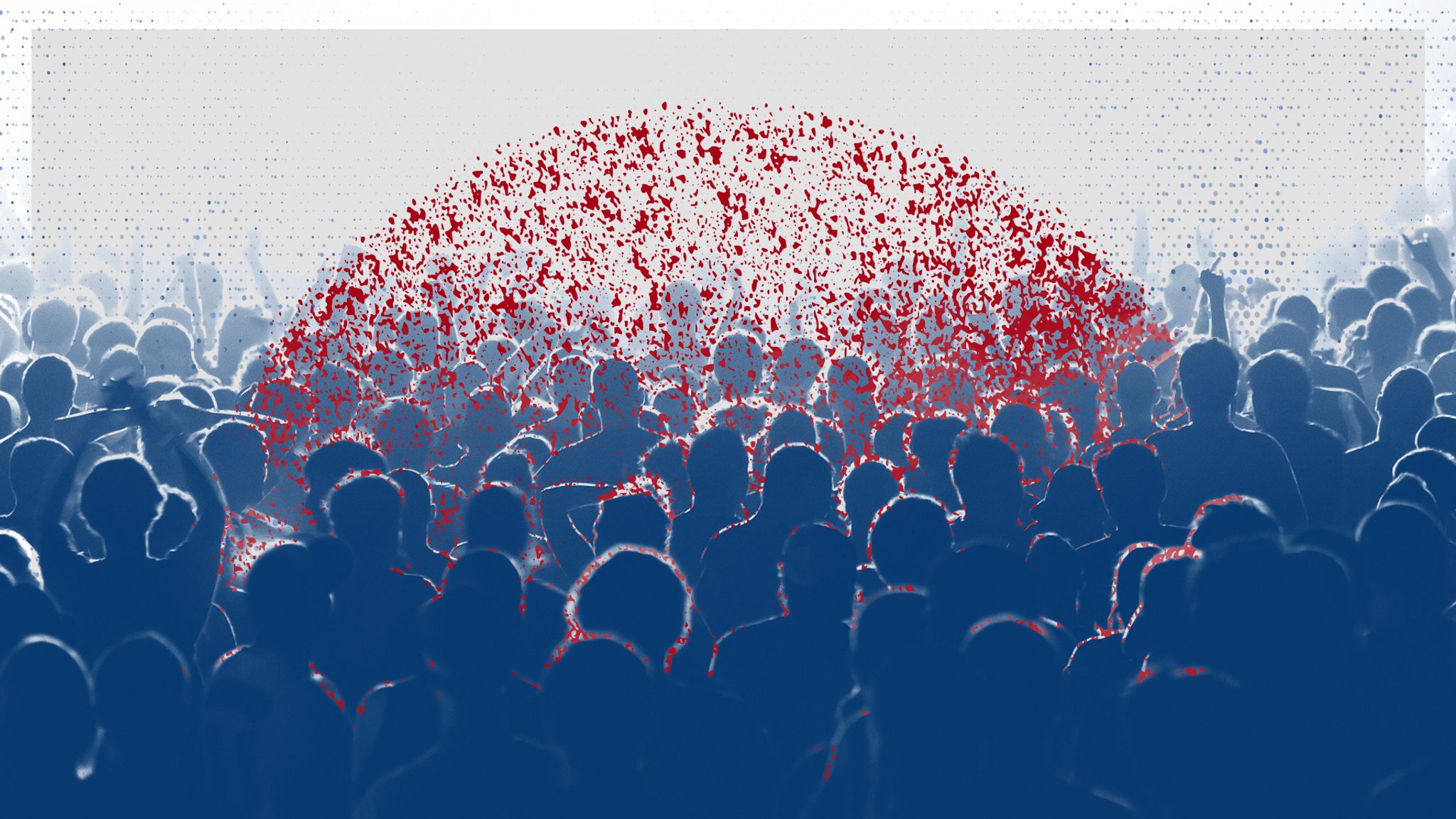 How does a population reach herd immunity?

There are two ways to achieve herd immunity, which also explains the dueling narratives you might have heard about whether herd immunity to Covid-19 is something we should or shouldn’t hope for.

“Vaccines are usually the best way to do it because they’re designed to elicit a robust immune response,” says Ellie Murray, ScD, an assistant professor of epidemiology at Boston University. But, “it can also happen just by that many people getting infected with the disease.”

To be effective, immunity needs to exist at similar levels everywhere. It’s based on the idea that enough infections occur randomly — or enough people are vaccinated — throughout a population “that you have equal amounts of immunity in every community,” says Matthew Memoli, MD, chief of the Laboratory of Infectious Diseases Clinical Studies Unit at the National Institute of Allergy and Infectious Diseases. “If you don’t have that, you have pockets with and pockets without immunity.”

In fact, that’s how measles has made a comeback in the U.S. in recent years. Think back to the example of those 50–70 people in town all going to the same worship service — that has actually been happening with schools, neighborhoods, churches, and other groups. As measles vaccination levels dropped in certain communities, the erosion of herd immunity opened a path for the virus to travel through the population.

We already know a vaccine is, optimistically, at least two years away. Yes, you’ve heard “12–18 months” a million times, but that’s how long it will likely take to get the vaccine to the public after researchers have developed and tested the vaccine. Even 18–24 months is unrealistic given how long development and testing can take. The fastest vaccine ever made, for mumps, took four years.

But reaching herd immunity through infection has two major drawbacks: uncertainty and cost. 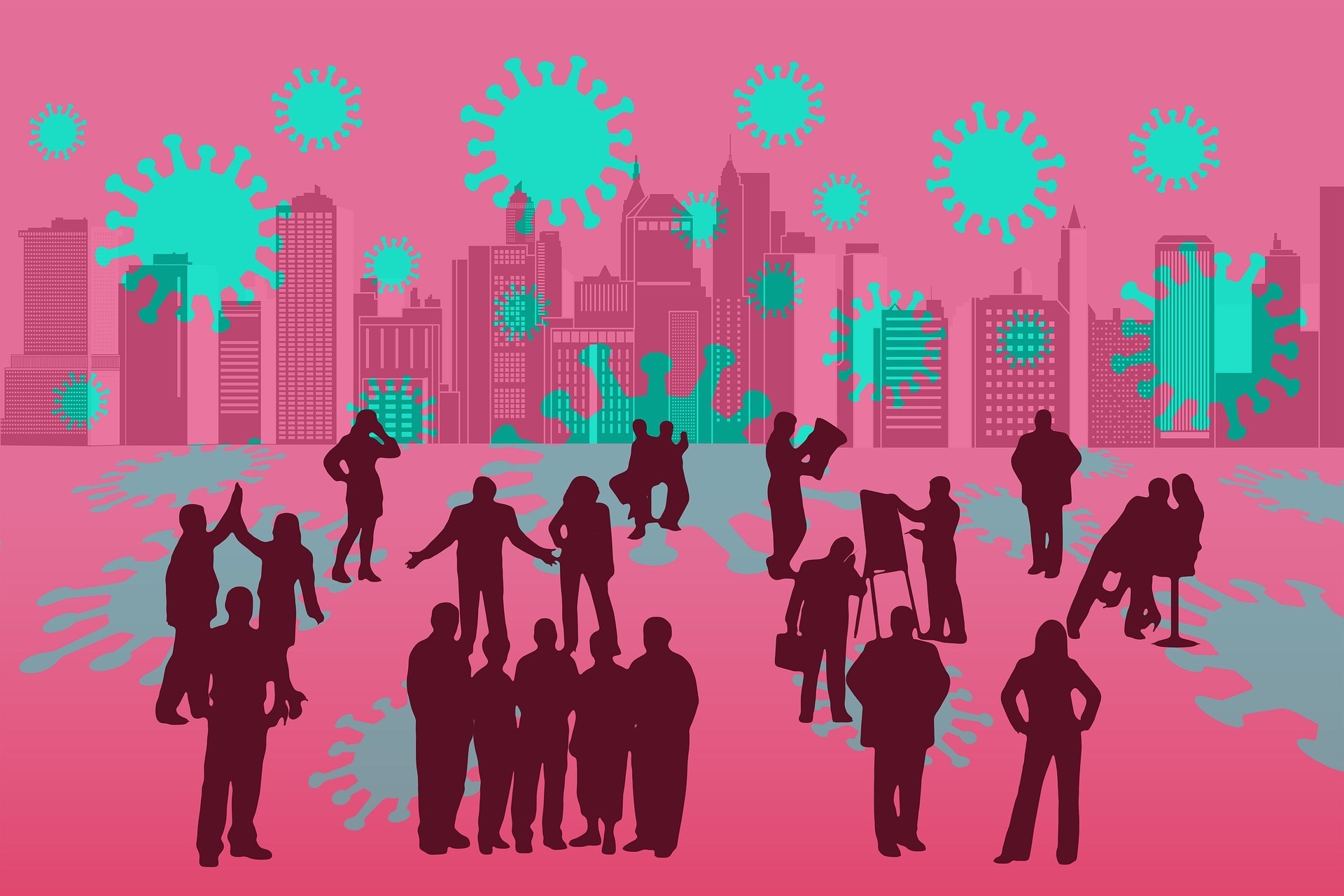 We don’t know enough about immunity to Covid-19

Reaching herd immunity through infections only works if getting an infection actually makes you immune to the disease, or immune long enough for it to matter. As Dana Smith has written at Elemental, scientists don’t yet know what immunity to Covid-19 involves or how long it lasts. Researchers know people make antibodies to Covid-19, but “antibody levels don’t necessarily mean protection,” says Angela Rasmussen, PhD, a virologist at Columbia University. “You can also not have detectable antibodies and still have some protection.”

Antibodies aren’t the only thing that gives people immunity to a disease. The body can also retain “memory” B-cells, which are antibody factories, and T-cells, which kill infected cells, among other things. Even without detectable levels of antibodies to a pathogen, the immune system of someone with enough memory B-cells and T-cells could begin killing infected cells and making antibodies again when the pathogen shows up.

In fact, Memoli said he has seen people without detectable antibodies to influenza who did not get sick even when intentionally infected with the flu virus in controlled laboratory studies. And the flip side is a risk too: Someone might have just enough immunity to prevent them from getting sick with symptoms, but not enough to prevent an infection from taking hold so that they pass along the disease to others.

“When you’re talking about herd immunity, it’s important that the immunity you’ve induced, either with the disease or the vaccine, prevents the ability of someone to spread the disease,” Memoli says.

Consider how “incomplete” immunity might play out in a place like Sweden, where chief epidemiologist Anders Tegnell claims Stockholm will reach herd immunity in a few weeks. Tegnell estimated at the end of April that about a quarter of the capital city’s population had antibodies to Covid-19, many from asymptomatic infections.

Helen Jenkins, PhD, an assistant professor of biostatistics at Boston University, is skeptical Stockholm will reach the herd immunity threshold so soon given how much voluntary social distancing the Swedish have observed. But even if 60% of the population does have Covid-19 antibodies by summer, it’s not clear what it means, especially since researchers don’t know whether asymptomatic infections confer more or less immunity than serious cases.

“It’s one thing to say lots of people have been infected,” Jenkins says. “It’s another to say they definitely are immune to reinfection.”

“What good is herd immunity if millions of people have to die to get there?” 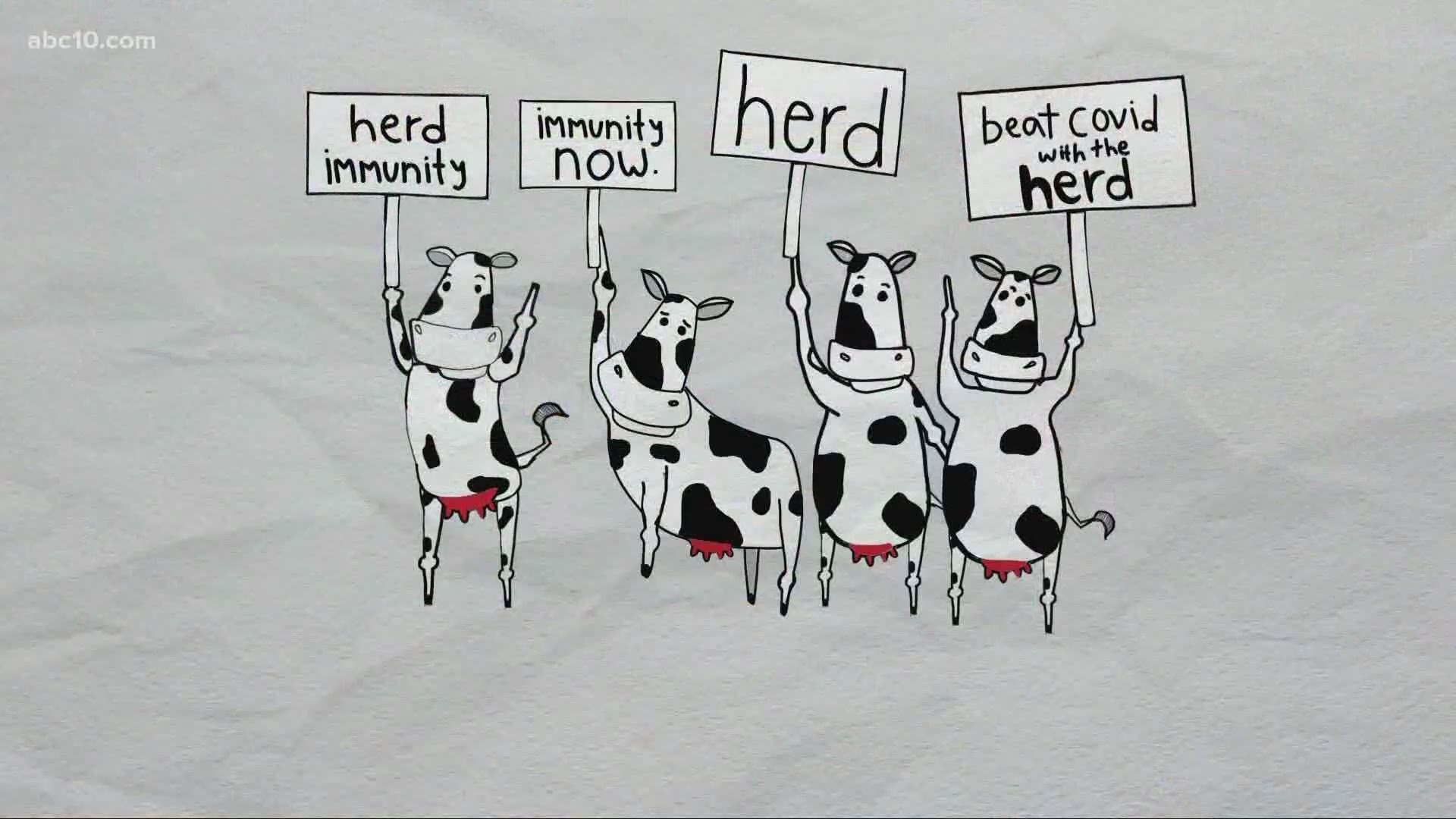 “The whole point is to minimize death and morbidity, but even if there is a high rate of asymptomatic or mild disease, you’re still going to have millions of deaths,” Rasmussen says. “What good is herd immunity if millions of people have to die to get there?”

Remember that threshold of 60% to 80% to bring about herd immunity to Covid-19? There’s a reason for it being a range.

Jenkins says, “60% is often bandied around as the level you need to drive the reproductive number below one, but it still takes time for transmission to go down.” But adds, “the final size of people who might be infected before you see no more transmission would be higher, more like 80 or 85%.”

Murray offers this analogy: “I think of it like a train. It’s going along slowly, then it’s getting up to speed, and then you pull the brake — but it’s not going to stop immediately. It’s got to slow down.”

With a current U.S. population of around 330 million people, a 60% infection rate is about 198 million people. Using the low estimate of a 0.5% death rate, nearly a million people will die (for context, as of May 13, the official death toll was just over 80,000). If the fatality rate is closer to 3%, nearly 6 million will die.

And that’s just when the brake is pulled, when infections start to taper down. Reaching 80% means 1.3 to 7.9 million dead Americans — with no guarantee transmission will stop.

“It’s still quite possible 99% of people would end up getting infected given that the outbreak had spread that far,” Murray says.

In fact, the only disease the U.S. — and the world — has ever overcome by reaching herd immunity is the 1918 flu pandemic, and that killed about 50 million people worldwide.

What can antibody testing tell us about herd immunity?

You may have heard that antibody, or serology, testing found up to 4% of Santa Clara County residents in California have had Covid-19, or up to 6% in Florida’s Miami-Dade County and 14% in New York. But it’s unclear how representative those findings are.

Even putting aside scientists’ criticism of some of those studies, those results mean little for herd immunity, except perhaps “for clarifying to the public that we’re not anywhere near herd immunity,” Murray says. “Even if these studies are right, just because the prevalence is this number in one area doesn’t mean it’s the prevalence where you live,” she says. “A study in New York City isn’t going to apply in Wyoming.”

And recall that herd immunity needs similar distribution across the nation.

“We’re going to have different prevalences of immunity in different parts of the country just as we’ve had different amounts of disease throughout the country,” Memoli says.

Ultimately, we will eventually reach herd immunity, through a vaccine, infection, or, most likely, both. But, Jenkins says, we shouldn’t rush the process, as appears to be happening in Sweden, which has several magnitudes more deaths than its neighbors with stricter containment measures.

“Some people could argue that Sweden is just getting it out of the way more quickly,” Jenkins says, but that argument frustrates her “because it implies a level of fatalism.”

“Even if we aren’t able to get a vaccine, and even if we’re going to end up with 80 to 85% of the population infected, we are learning more and more about the best way to treat people,” she says. Slowing down transmission gives researchers more time to identify better treatments, “so that ultimately when more people do get infected, they’re more likely to survive,” she says. “We need to do it more slowly so that we can reduce the number of deaths even if the number of infected ends up overall being the same.”

At the same time, we cannot shelter in place and maintain strict social distancing indefinitely while waiting on a vaccine. Epidemiologists Natalie Dean and Caitlin Rivers wrote in the Washington Post that reopening the economy will “depend on our preparedness to test, trace, and isolate infected people so that we don’t end up back where we started.”

Why we've been saying 'sorry' all wrong By Arianne Cohen Apologies can be tricky, but combining a dose of…