The Door to Hell is a real place. It's not located in your ex-boyfriend's apartment building; it's in Turkmenistan. The name isn't literal, of course, but one look at this giant, burning desert crater of flames might have you second-guessing.

Haunted houses and creepy basements are one thing, but the scare factor is taken to a new level near the village of Derweze in the middle of the Karakum Desert. The Darvaza gas crater, aptly nicknamed by locals "The Door to Hell" or "The Gates of Hell," is a burning crater that stretches 230 feet across and reaches 65 feet deep. Satan's swimming pool has been engulfed in flames since 1971.

Here's the story: Back in the early '70s when Turkmenistan was part of the Soviet Union, some Soviet geologists trekked out into the Karakum in search of oil. They started drilling, and that's when things went south. Unbeknownst to them, the team and their equipment were sitting atop a huge underground pocket of natural gas. The weight crumbled the desert surface, opening up a few craters that expelled all that flammable vapor. If you've ever had a gas leak scare in your apartment, you know the risk of fiery disaster is just one flick of a Zippo away.

To deal with the gas spewing out of the Earth, the geologists implemented an idea that is not uncommon for the job, but sounds a little wild: They lit that stuff on fire. (Disclaimer: This is not the way to handle that apartment gas leak!) The hope was that all the escaped natural gas would burn up in a few weeks. It didn't. Fast forward more than 40 years, and you can still roast up a good s'more over the pit. There are no plans on how, when, or if the burning will be ended. 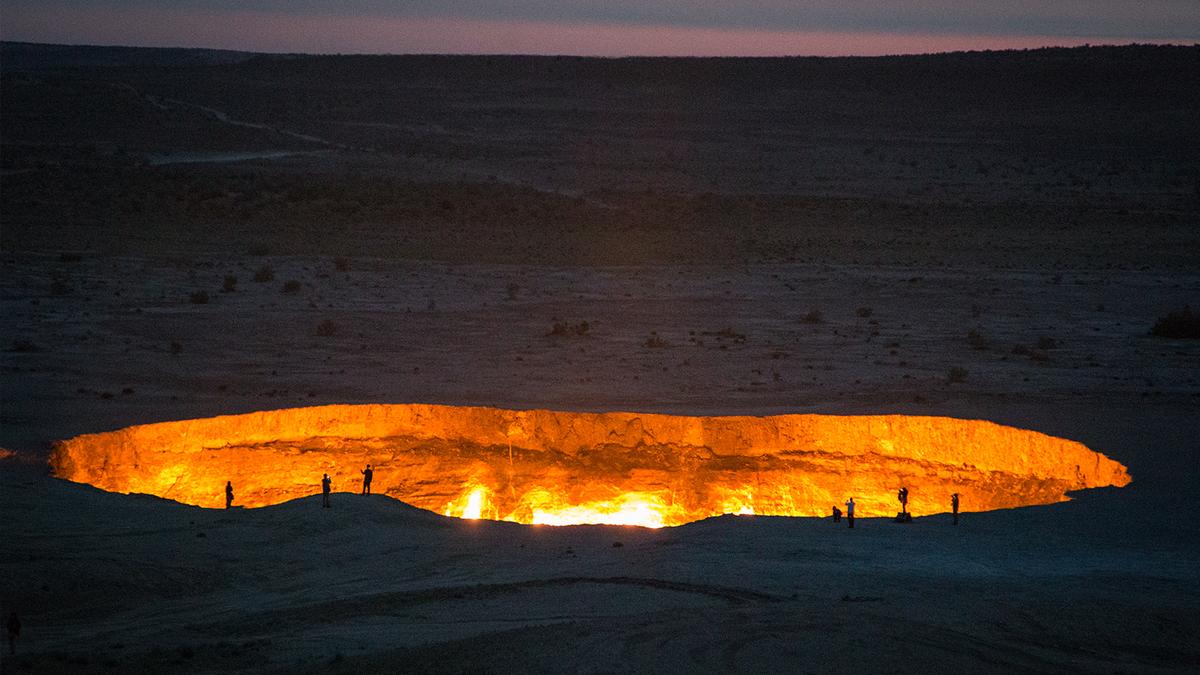 Going to Hell doesn't seem like a dream vacay, yet the burning crater draws hundreds of tourists every year. Given that Turkmenistan's tourism industry isn't exactly booming, the government decided to let this bonfire keep a-blazin'. (No word if they have a gift shop.)

It attracts more than just courageous travelers; the Door to Hell lures in nearby desert wildlife, dazzled by its embers. Reportedly, thousands of spiders can be seen leaping to their deaths in the crater. Curiosity killed the ... arachnids?

Not unlike the spiders, explorer George Kourounis dove to the depths of the crater in 2013, becoming the first person to do so. There, he collected soil samples and conducted research. Kourounis survived, but for the love of God do not attempt to follow in his footsteps.

The average sightseeing adventurer can check out this unique attraction for themselves, too. Travel site Caravanistan offers a few ways to squeeze seeing the Door to Hell into your travel plans. You can even camp about a football field's distance away from the crater, if you dare.

How Much Sleep Do You Really Need? New neuroscience study offers surprising insights about sleep duration. By Sebastian Ocklenburg,…