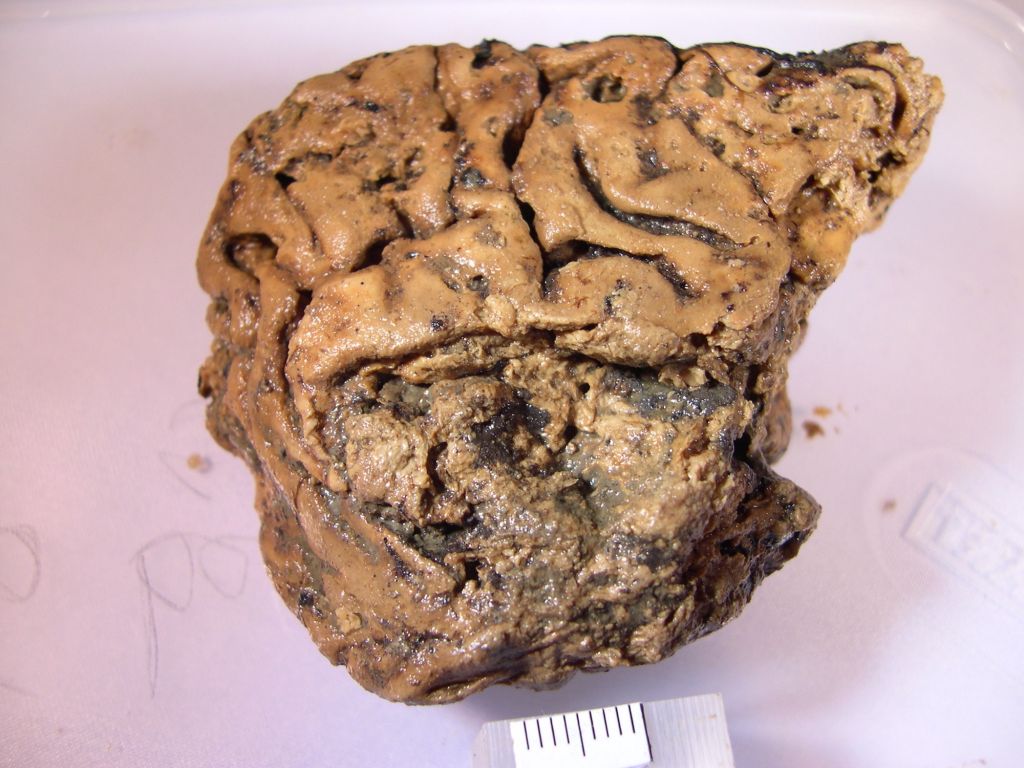 Scientists are amazed that a human brain could persist for 2,600 years.
(Image: © Axel Petzold/Journal of the Royal Society Interface)

In 2008, archaeologists were stunned to discover a human brain dating to the Iron Age. The finding seemed to defy basic biology; human brains, like any other soft tissue, typically decay soon after death.

But now, scientists have figured out how this brain remained intact for 2,600 years.

Multiple factors, they said in their new study, played a role, including the person's tightly folded brain proteins and the way in which the person was buried in what is now York, England.

The so-called "Heslington brain" made headlines after the York Archaeological Trust excavated its mud-covered skull in the village of Heslington and found the well-preserved brain inside. "Although covered by sediment, individual brain gyri became discernible after cleaning," the researchers wrote in the study. Radiocarbon dating indicated the individual had lived around 673 B.C. to 482 B.C.

Whoever buried the mysterious person didn't use any artificial preservation techniques, the scientists noted. Rather, it appears that the way in which the person was buried made a key difference. It's also possible that an unknown disease altered the person's brain proteins before he or she expired, the researchers said.

"The manner of this individual's death, or subsequent burial, may have enabled the brain's long-term preservation," study lead researcher Axel Petzold, an associate professor at the University College London Queen Square Institute of Neurology, said in a statement.

Petzold has spent years studying two types of filaments in the brain: neurofilaments and glial fibrillary acidic protein (GFAP), both of which act like scaffolds that hold brain matter together. When Petzold and his team looked at the Heslington brain, they saw that these filaments were still present, raising the idea they played a role in the brain's extraordinary preservation, he said. 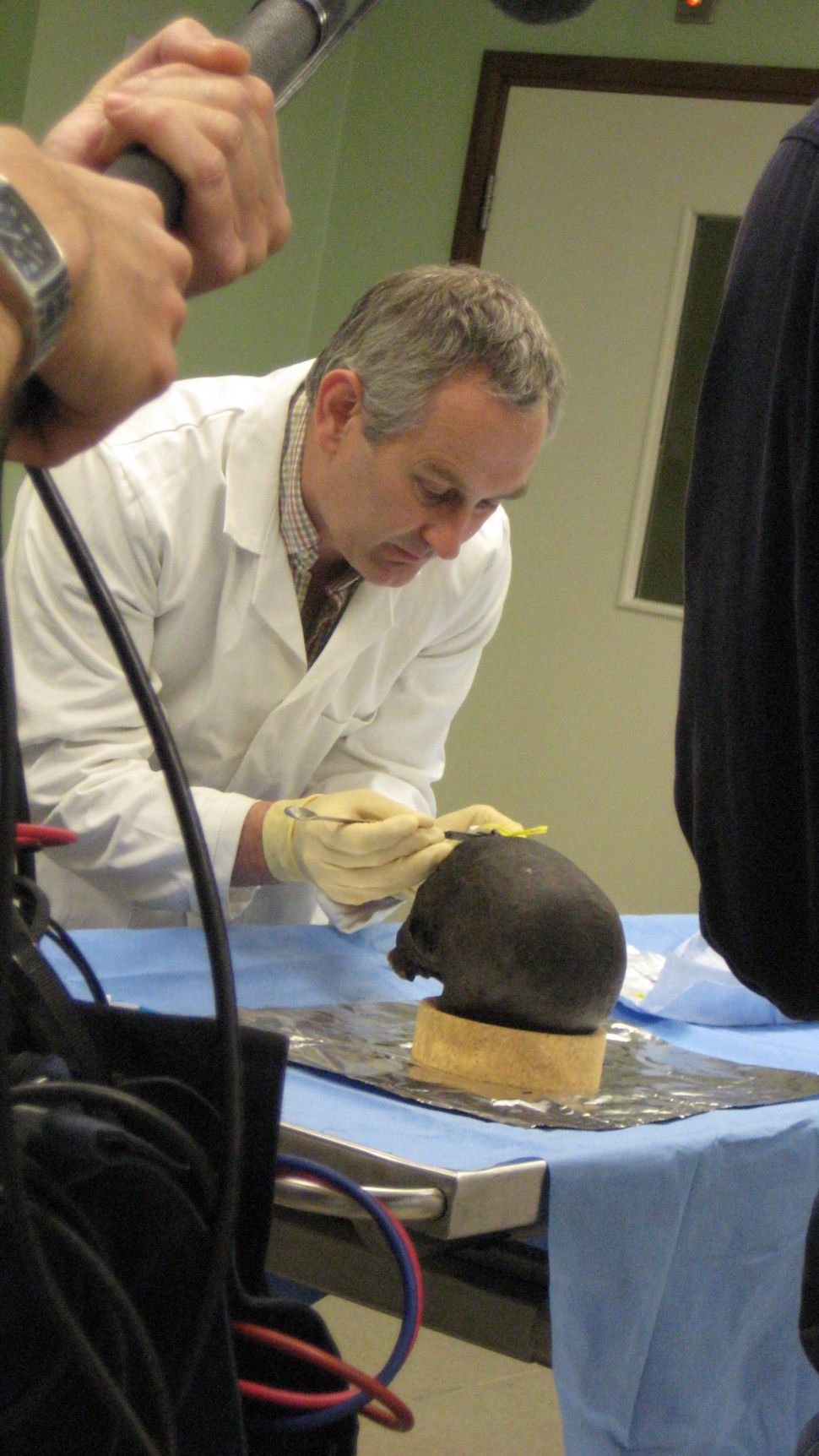 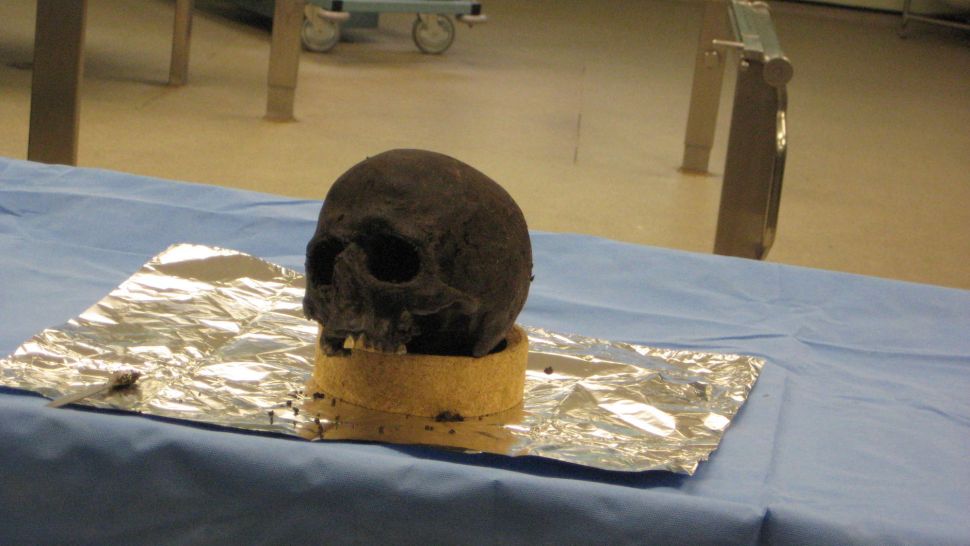 The Heslington skull retains a few teeth,as well as its brain.
(Image: © Axel Petzold/Journal of the Royal Society Interface) 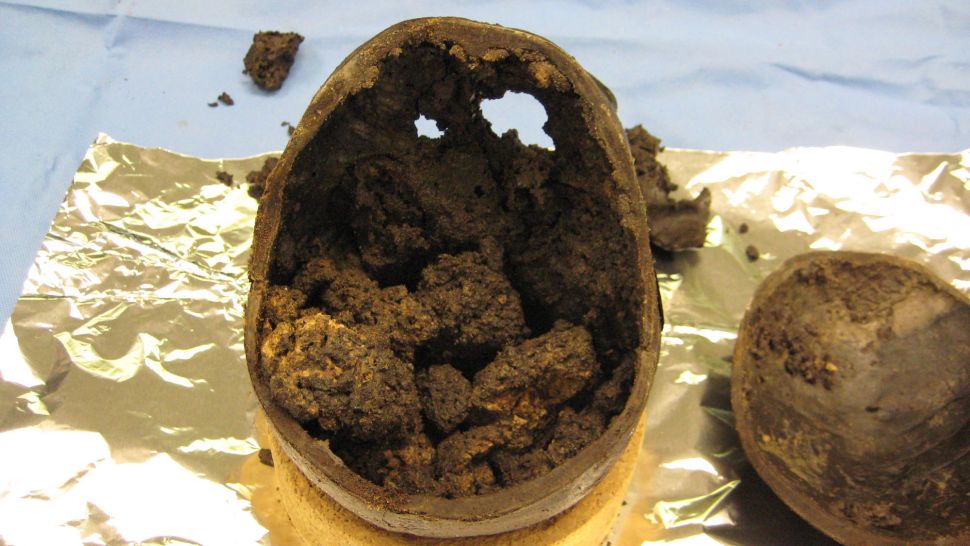 Sediment found inside the skull.
(Image: © Axel Petzold/Journal of the Royal Society Interface) 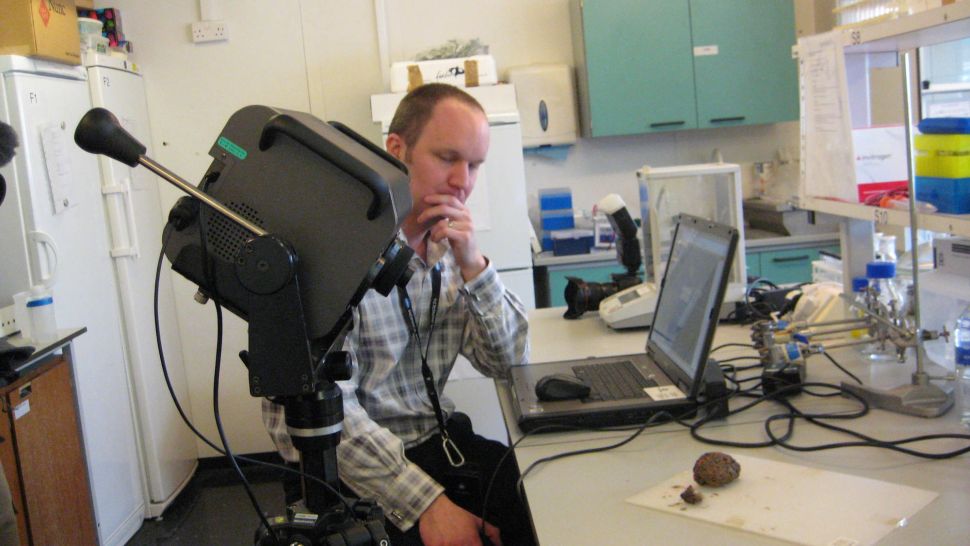 In most circumstances, brains rot after enzymes from the environment and the dead person's microbiome eat up the tissue. But for the Heslington brain, it's possible that these enzymes were deactivated within three months, according to experiments the researchers did. In these tests, Petzold and his colleagues found that it takes about three months for proteins to fold themselves into tight aggregates if these enzymes are not present.

Perhaps an acidic fluid invaded the brain and prevented these enzymes from causing decay before or just after the person died, Petzold said. He added that this enigmatic person likely died after being struck in the head or neck, hanged or decapitated.

Typically, neurofilament proteins are found in greater concentrations in the white matter, located in the inner parts of the brain. But the Heslington brain was an anomaly, with more filaments in the outer, gray matter areas. It's possible that whatever stopped the enzymes from decomposing the brain began on the outer regions of the brain, like an acidic solution seeping into the brain, Petzold said.

The finding may provide insight into treatment for Alzheimer's disease. The team looked at how long it takes brain protein aggregates to unfold themselves, finding that it took an entire year. This suggests that treatments for neurodegenerative diseases that involve protein aggregates may need a more long-term approach than previously thought.

This isn't the only ancient human brain tissue archaeologists have found. For instance, roughly 8,000-year-old brain material was found inside human skulls that had received an underwater burial in Sweden. That said, the Heslington brain is among the best preserved ancient human brains, the researchers said.

Researchers put 3D glasses on cuttlefish for...science BY ANNA IOVINE No, it's not watching a movie.IMAGE: UNIVERSITY…