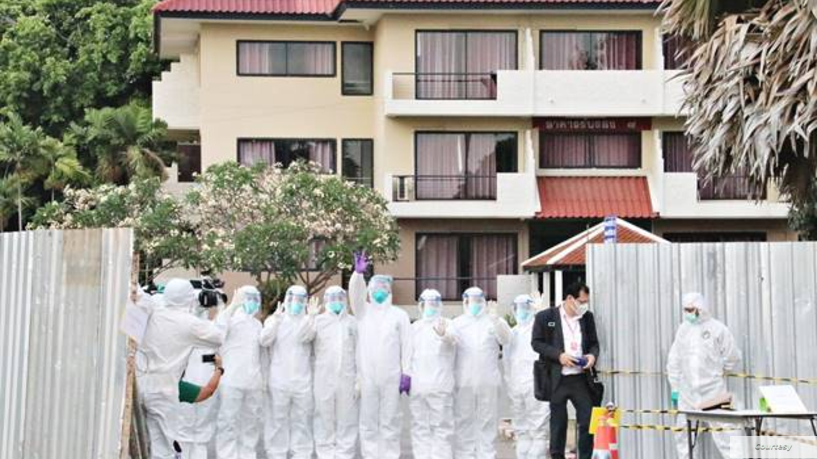 Thai medical staff stand in front of a facility at the Satthahip Naval Base, where Thai citizens who were evacuated from Wuhan, China, are quarantined for 14 days after their arrival, Feb. 4, 2020.

On February 4, Badeephak Kaosala, 23, a Thai medical student in Wuhan, China, boarded a plane that evacuated him from the center of the coronavirus outbreak. That night he arrived in his home country, which has one of the world’s best records of treating the virus. 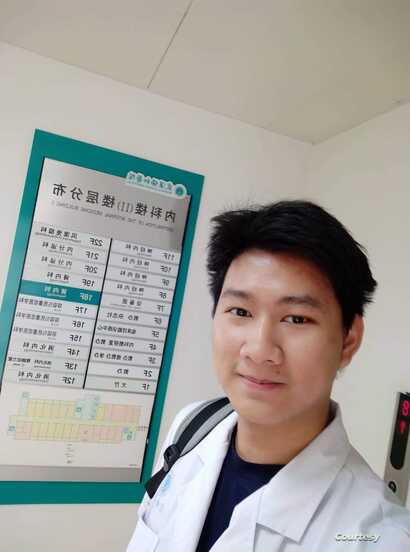 Badeephak Kaosala, a Thai medical student at Tongji Medical College left Wuhan, the center of the coronavirus outbreak in eastern China on February 4 to his home country. He is subject to a quarantine for 14 days at Thailand's Sattahip Naval Base.

Subject to a 14-day quarantine at a naval base east of Bangkok, Badeephak has confidence in Thai doctors and finds comfort in the treatment he is receiving. “To be honest, I don’t mind staying another month. That says a lot,” he said. “The Thai navy has really outdone themselves.”

Thailand’s experiences in developing medical staff and modern facilities can be traced to King Chulalongkorn, or Rama V, a visionary monarch who reigned from 1868 to 1910. That was an era marked by the medical advances made by the French chemist and microbiologist Louis Pasteur; the English surgeon Joseph Lister, who pioneered the use of antiseptics; and the German physician Robert Koch, who isolated the bacterial causes of anthrax, tuberculosis and cholera, and developed safeguards to improve public health.

Those medical advancements have helped the country weather bouts of fatal epidemics and raised hopes of minimizing the impact of the outbreak of the novel coronavirus, or COVID-19, experts say. 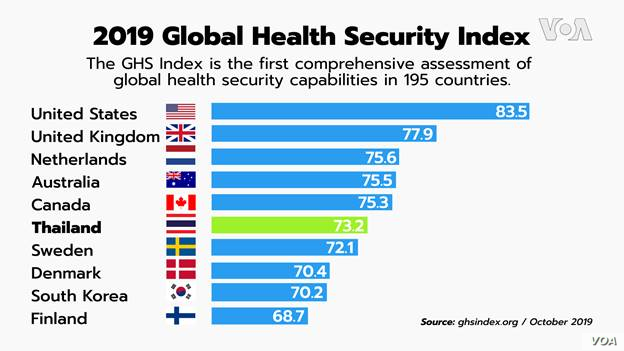 In October 2019, the Global Health Security Index found Thailand was better prepared for a global health threat than any other Asian country and ranked it sixth most ready in the world. The United States was ranked first in the assessment and benchmarking of health security across the 195 countries that make up the States Parties to the World Health Organization’s International Health Regulations.

On January 11, Thailand became the first country outside China to have confirmed a patient with COVID-19 infection. Since then, it has recorded 11 recoveries, according to Tanarak Plipat, deputy director of Thailand’s Department of Disease Control.

“Among countries in Asia, Thailand is one of the better prepared and equipped to determine whether people acquire coronavirus infection or not,” said epidemiologist Arthur Reingold at the University of California-Berkeley's School of Public Health, who has worked on the prevention and control of infectious diseases in developing countries around the world.

“Thailand has good laboratory capacity for testing specimens,” he said. “And they have good capacity in epidemiology, compared to many, many countries.” 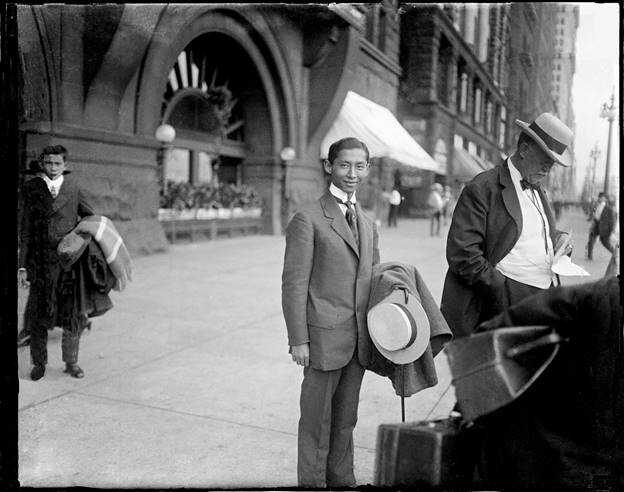 Prince Mahidol Adulyadej of Songkla's arrival in Gloucester, Mass., Aug. 27, 1916. He came to the U.S. to study public health at the Harvard-MIT School for Health Officers (as the Harvard T.H. Chan School of Public Health was originally known).

Before graduating in 1928 with a doctorate in medicine, the prince served as a negotiator for Thailand to receive Western medical expertise through the Rockefeller Foundation. At the time, John D. Rockefeller’s Standard Oil sought to increase investment in Thailand, where the company had had a local branch since 1894, selling kerosene under the Chicken and Eagle brand. During the 1920s, the foundation brought experts to help the tropical country combat intestinal parasites, such as hookworms, which affected more than 300,000 Thais.

Marc Lipsitch, a professor of epidemiology at the Harvard T.H. Chan School of Public Health, said a contemporary example of Thailand’s advanced medical collaboration was a network known as MORU. A joint effort between Oxford University and Mahidol University, it was named after the prince, Mahidol Oxford Tropical Medicine Research Unit.

A son of Prince Mahidol, King Bhumibol Adulyadej, or Rama IX, who reigned from 1946 until his death in 2016, adopted his father’s medical causes. 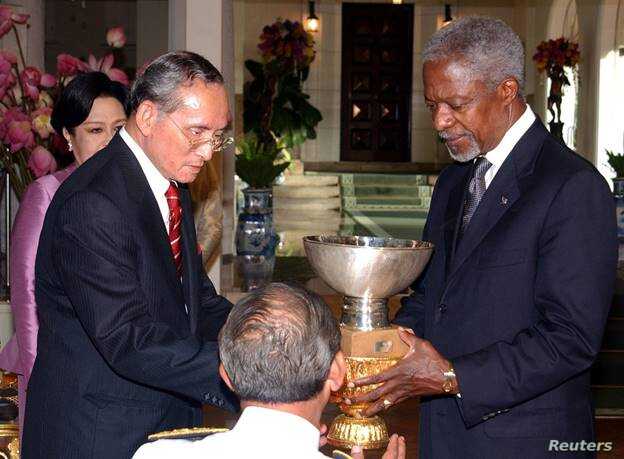 One of the biggest public health threats in the past 40 years was the spread of HIV in the late 1980s and 1990s that infected hundreds of thousands of people in Thailand. Today, the country’s medical know-how and openness to international outreach helps the government contain HIV.

In 2016, Thailand became the first country in Asia to eliminate mother-to-child infection of HIV, according to the World Health Organization. Its effectiveness in public health management during the bird flu outbreak of 2004 also gained recognition by WHO.

For the first weeks after COVID-19 was reported in Wuhan, Thailand trailed China as a distant second on the list of countries with the most cases of infection. As of Wednesday, Thailand slid to the third, with 33 cases, compared with 47 in Singapore and more than 45,000 in China, according to the WHO.

“When we first learned about the infection, we have a system to mobilize 12 responsible units,” including teams with tasks ranging from announcing public health alerts and overseeing quarantines to testing suspected cases and providing medical supply, said Suthat Chottanapund, director of the Bureau of Risk Communication and Health Behavior Development.

“It was stressful at the beginning, but now we have seen that the system is working well,” he said.

On February 3, doctors at Thailand’s Rajavithi Hospital in Bangkok announced that their treatment of a COVID-19 patient with a drug cocktail consisting of HIV medicines and anti-flu medication seemed effective, following the use of a similar cocktail by Chinese physicians. A few days later South Korean authorities followed suit, according to a media report. But, as Tanarak of the Thai Department of Disease Control said, other countries continue to test different treatments.

While Thai medical staff were making strides against the coronavirus, a string of gaffes by Thai top officials strained public belief in the government’s effort to contain COVID-19, as Prime Minister Prayut Chan-o-cha extended his power grip for the sixth year.

Last week, Thai Minister of Public Health Anutin Charnvirakul used abrasive language in criticizing Western tourists who refused to wear surgical masks. “They were given [masks] but refused to put them on. We must tell them to get out of Thailand,” he told reporters. Anutin later apologized for his remarks.

Masks are not recommended for people who are well, according to the U.S. Centers for Disease Control and Prevention. “You should only wear a mask if a health care professional recommends it. A face mask should be used by people who have been exposed to [COVID-19] and are showing symptoms,” the CDC says on its website.

Faced with pressure to assure the public of Thailand’s readiness to repatriate Thai citizens from Wuhan, Prayut told reporters on January 27 that he had ordered his subordinates to prepare to send an evacuation aircraft a month earlier. His time frame confused the public because China only sent an alert on several cases of pneumonia to WHO on December 31.

“Compared with other countries, Thailand has fewer detected cases than you would expect, given the travel volumes,” Harvard’s Lipsith said. “It would be reasonable to believe that Thailand has a number of undetected cases.”

He continued, “I think of a very possible scenario that we have growing epidemics in many parts of the world. A more optimistic scenario — possible, but doesn’t seem too likely at the moment — is that … it will be contained in each of the places outside China.”

Warangkana Chomchuen contributed to this report, which originated on VOA Thai.

Why Do You Stop Liking New Music as You Get Older? Written by Frank T. McAndrew for The Conversation…