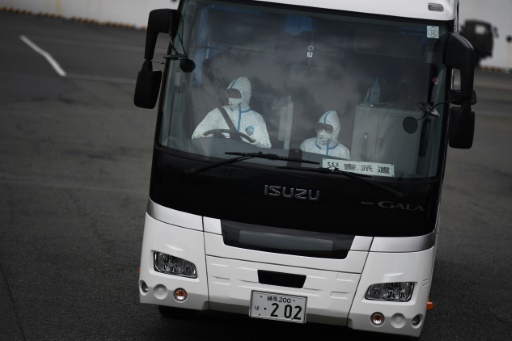 The first group of passengers who are 80 and older and tested negative for the new coronavirus have been allowed to move to lodgings on land Photo: AFP

By Hiroshi Hiyama and Natsuko Fukue

The first passengers began leaving a quarantined cruise ship in Yokohama on Friday to finish their isolation in government-designated lodging after testing negative for the new coronavirus.

The government has given passengers aged 80 or older in poor health or confined to windowless inner cabins on the Diamond Princess the chance to move from the ship to accommodation on land.

But only those who test negative for the virus that has so far infected more than 200 people on board the ship have the option to move.

The first of them departed the massive cruise ship on Friday afternoon, traveling in buses with blacked out windows.

At the wheel, one driver was dressed in a head-to-toe white protective suit, complete with goggles and mask.

A government official said 11 people had left, but declined to say whether more would depart Friday or offer further details.

The move comes a day after the number of infections diagnosed on the ship rose to 218.

Senior health ministry official Gaku Hashimoto boarded the ship Friday morning to announce that all passengers "who are considered to be high risk in general health" would now be tested for the virus.

"We are aware that many people are worried and concerned about the situation. However, to improve the situation as much as possible, the government is making its best efforts," the statement said.

There were more than 3,700 people on the ship when it arrived off the Japanese coast last week, but those diagnosed with the virus have been taken off the boat, along with some people suffering other health conditions requiring medical attention.

Ten of those hospitalised are now in serious condition, Health Minister Katsunobu Kato said on Friday.

Excluding the cases on the ship, and an infected quarantine officer, Japanese authorities have so far diagnosed 33 people with the newly named COVID-19.

The Diamond Princess has been quarantined off Japan since early February after it emerged a former passenger who got off the boat in Hong Kong had tested positive for the virus.

The quarantine is due to end on Feb 19 and those on the ship have been mostly confined to their cabins and asked to wear masks and keep their distance from other passengers during brief outings on open deck.

Crew on board have expressed concern that their conditions -- including shared cabins, bathrooms and workspaces -- put them at greater risk of contracting the virus.

On Friday afternoon, the crew distributed iPhones to passengers on board, with the captain saying the handsets had been sent by the Japanese government.

"We are distributing iPhones to all staterooms, loaded with an application... (that) will help you to get medical support. Full instructions will be distributed together with the phones," he said.