Why does the coronavirus spread so easily between people?

Researchers have identified microscopic features that could make the pathogen more infectious than the SARS virus — and serve as drug targets. 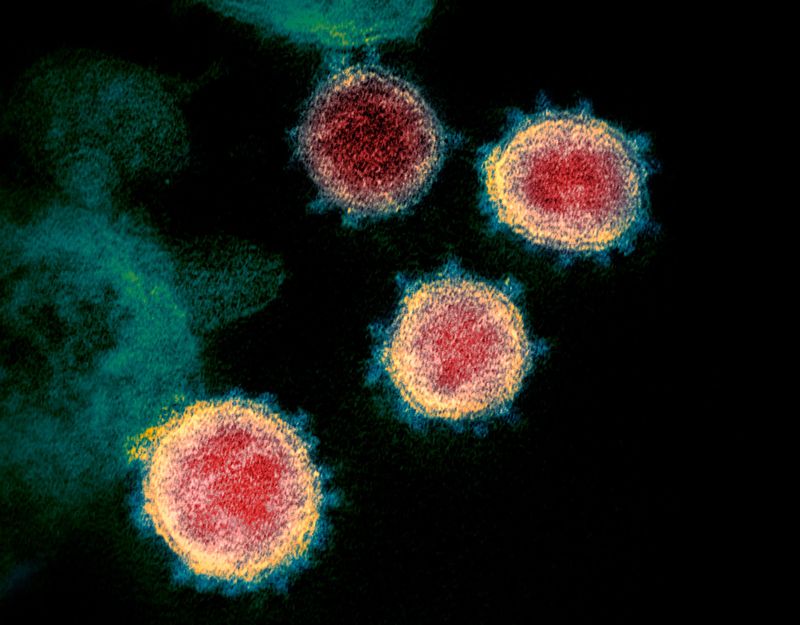 An image of the new coronavirus taken with an electron microscope.Credit: U.S. National Institutes of Health/AP/Shutterstock

As the number of coronavirus infections approaches 100,000 people worldwide, researchers are racing to understand what makes it spread so easily.

A handful of genetic and structural analyses have identified a key feature of the virus — a protein on its surface — that might explain why it infects human cells so readily.

Other groups are investigating the doorway through which the new coronavirus enters human tissues — a receptor on cell membranes. Both the cell receptor and the virus protein offer potential targets for drugs to block the pathogen, but researchers say it is too early to be sure.

“Understanding transmission of the virus is key to its containment and future prevention,” says David Veesler, a structural virologist at the University of Washington in Seattle, who posted his team’s findings about the virus protein on the biomedical preprint server bioRxiv on 20 February1.

The new virus spreads much more readily than the one that caused severe acute respiratory syndrome, or SARS (also a coronavirus), and has infected more than ten times the number of people who contracted SARS.

To infect a cell, coronaviruses use a ‘spike’ protein that binds to the cell membrane, a process that's activated by specific cell enzymes. Genomic analyses of the new coronavirus have revealed that its spike protein differs from those of close relatives, and suggest that the protein has a site on it which is activated by a host-cell enzyme called furin.

This is significant because furin is found in lots of human tissues, including the lungs, liver and small intestines, which means that the virus has the potential to attack multiple organs, says Li Hua, a structural biologist at Huazhong University of Science and Technology in Wuhan, China, where the outbreak began. The finding could explain some of the symptoms observed in people with the coronavirus, such as liver failure, says Li, who co-authored a genetic analysis of the virus that was posted on the ChinaXiv preprint server on 23 February2. SARS and other coronaviruses in the same genus as the new virus don't have furin activation sites, he says.

The furin activation site “sets the virus up very differently to SARS in terms of its entry into cells, and possibly affects virus stability and hence transmission”, says Gary Whittaker, a virologist at Cornell University in Ithaca, New York. His team published another structural analysis of the coronavirus’s spike protein on bioRxiv on 18 February3.

Several other groups have also identified the activation site as possibly enabling the virus to spread efficiently between humans4. They note that these sites are also found in other viruses that spread easily between people, including severe strains of the influenza virus. On these viruses, the activation site is found on a protein called haemagglutinin, not on the spike protein.

But some researchers are cautious about overstating the role of the activation site in helping the coronavirus to spread more easily. “We don’t know if this is going to be a big deal or not,” says Jason McLellan, a structural biologist at the University of Texas at Austin, who co-authored another structural analysis of the coronavirus, which was published in Science on 20 February5.

Other scientists are wary of comparing furin activation sites on flu viruses to those on the new coronavirus. The haemagglutinin protein on the surface of flu viruses isn’t similar or related to the spike protein in coronaviruses, says Peter White, a virologist at the University of New South Wales in Sydney, Australia.

And the flu virus that caused the deadliest recorded pandemic, the 1918 Spanish flu pandemic, doesn’t even have a furin activation site, says Lijun Rong, a virologist at the University of Illinois in Chicago.

Whittaker says studies in cell or animal models are needed to test the activation site’s function. “Coronaviruses are unpredictable, and good hypotheses often turn out to be wrong,” he says. His team is currently testing how removing or modifying the site affects the spike protein’s function.

Li's team are also looking at molecules that could block furin, which could be investigated as possible therapies. But their progress is slow because of the outbreak. Li lives on campus and is currently the only member able to access his team's laboratory.

McLellan’s group in Texas has identified another feature that could explain why the new coronavirus infects human cells so successfully. Their experiments have shown that the spike protein binds to a receptor on human cells — known as angiotensin-converting enzyme 2 (ACE2) — at least ten times more tightly than does the spike protein in the SARS virus. Veesler’s team has also found this, which suggests that the receptor is another potential target for vaccines or therapies. For example, a drug that blocks the receptor might make it harder for coronavirus to enter cells.

Why We'll (Probably) Never Be Able to Teleport Written by Matthew R. Francis For many of us, teleportation would…