Why We'll (Probably) Never Be Able to Teleport

For many of us, teleportation would be the absolute best way to travel. Imagine just stepping into a transporter and being able to go thousands of miles in nearly an instant. It's a staple in "Star Trek" and other science fiction, and a form of it even shows up in "Harry Potter." In the real world, unfortunately, human teleportation may never be achievable. The reasons for that come from fundamental physics.

The biggest expense of getting anything from Earth into space is mass. Stuff has mass, and humans require a lot of stuff just to survive: air, water, food, and all the equipment needed to process our bodily needs. Teleporting an astronaut directly to the International Space Station would skip the need to launch a rocket — which also has a lot of mass — carrying all that stuff. So what's standing in the way of instantaneous, painless teleportation? (Wormholes, another science fiction trope, are a story for another day.)

First, let's get the "instantaneous" part out of the way: Relativity tells us that nothing made of matter can travel faster than the speed of light. Even if you could teleport yourself, you would take time in transit. While it takes light only about one second to reach the moon, moving matter through space would take longer, even with a teleporter. That wouldn't be a dealbreaker for teleporting to different spots on Earth, though. Even in Star Trek, they mostly use the transporter to get to and from orbit or between ships. 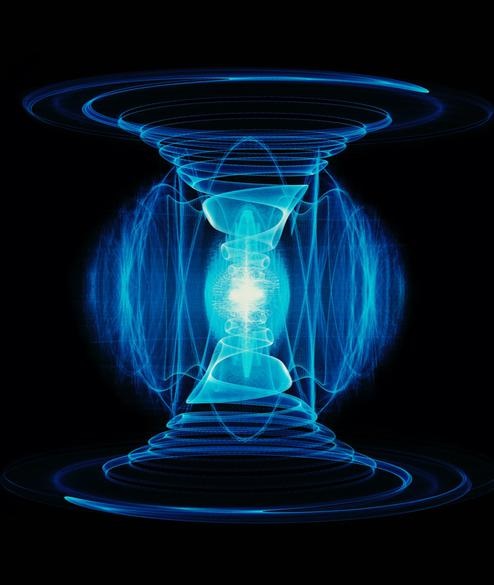 You Can't Teleport Your Power Bill

The real question, however, involves what is being transported and how. The standard-issue sci-fi teleporter can transport passengers through solid barriers. In reality, we can't pass particles of matter through most materials because they interact too strongly with the atoms inside. That gets to the key problem with any kind of teleportation: The matter making up our bodies obeys rules that aren't conducive to speeding across open space and through barriers.

There's also the matter of energy. Say you want to teleport from one side of an open field to the other to avoid worrying about walls. Moving between these two points requires energy no matter what method you use, whether it's chemical energy burned by your muscles to walk or something else. Part of teleportation's appeal is that you only expend energy at the ends of the journey, not the middle, but there's still a minimum of energy required to move anything.

There's also the matter of energy. Say you want to teleport from one side of an open field to the other to avoid worrying about walls. Moving between these two points requires energy no matter what method you use, whether it's chemical energy burned by your muscles to walk or something else. Part of teleportation's appeal is that you only expend energy at the ends of the journey, not the middle, but there's still a minimum of energy required to move anything.

Star Trek-style transporters dissolve bodies into their basic components and reassemble them on the other end. That would take a phenomenal amount of energy, even before considering the technical challenge of taking someone apart and putting them back together without killing them. (More on that shortly!) In other words, to make teleportation feasible, we have to find some way around the energy problem. Otherwise, it'll be more expensive than using conventional rockets. Such a way only exists in the mind of sci-fi writers, unfortunately.

You're a Hot Mess, Scientifically Speaking

However, scientists have worked out a kind of transporter where they beam information rather than people. Quantum teleportation involves transporting the "state" of a particle (usually a photon, or particle of light) from one place to another, which promises to be a secure form of information transfer in the future. The key to this tech is that, quantum mechanically speaking, all particles of the same type are identical. For instance, every electron is exactly the same as every other in terms of mass, electric charge, etc., so if you copy the configuration of one electron to another, it's exactly the same as teleporting it.

Electrons are simple compared to whole bodies. The average person contains around 1028 atoms: 1 followed by 28 zeroes. The total quantum configuration of a human body includes how those atoms are arranged, which involves everything from the structure of DNA up to bones and skin. That's a lot of information to try to transport, so nobody expects quantum teleportation to carry humans.

And that's just copying the configuration of each of those atoms. You also have to somehow assemble a complete person from all that information at the other end of the process. Some researchers estimated it would require 1042 bits just to encode what's in our brains alone. And there are ethical and philosophical problems, too, since the process of copying all the quantum information would likely kill the human you're trying to teleport, leading to the question of whether the teleported individual is the same or a new person.

All this adds up to the sad truth: Without a new discovery that contradicts what we know about the cosmos, we simply can't teleport. We'll have to focus on other ways to explore the universe.

Why does the coronavirus spread so easily between people? Researchers have identified microscopic features that could make the pathogen…

Why do Americans Sell Soda by the Liter but Milk by the Gallon? BY NATHAN CHANDLER Bottles of Pepsi…