Concerns are rising about the virus’s potential to circulate undetected in Africa and Asia.
By Smriti Mallapaty 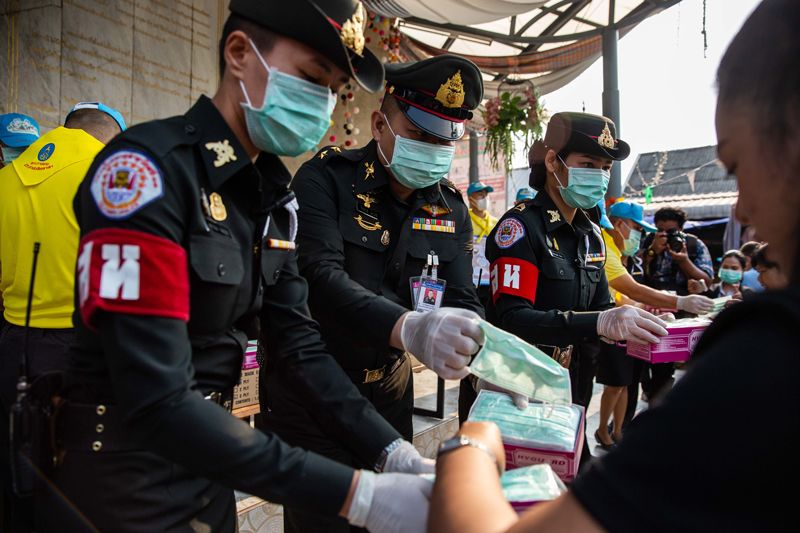 Infections of the new coronavirus have now been detected in 24 countries outside China. But researchers warn that cases might be going undetected in some nations that are considered at high risk of an outbreak but are reporting fewer cases than expected, or none at all.

The possibility of unreported cases is particularly concerning in countries with weaker health-care systems, such as those in southeast Asia and Africa, which could quickly be overwhelmed by a local outbreak, experts say. Although no cases have yet been reported in Africa, some countries there, such as Nigeria, are at particular risk because of their strong business ties to China.

Researchers have been using flight data to create models of the virus’s possible spread around the world. On 11 February, the International Committee on Taxonomy of Viruses officially named the virus SARS-CoV-2, highlighting its similarity to the virus that causes severe acute respiratory syndrome (SARS).

One model identified 30 countries or regions at risk of importing SARS-CoV-2 on the basis of the large number of flights from Wuhan, the outbreak’s epicentre, and from other cities in China with many travellers from Wuhan. The model used flight data from February 2018.

Thailand is the country most exposed, according to the study, which was posted on the medRxiv preprint server on 5 February. Thirty-three people with the infection have been reported there so far, of whom 23 had been in China. But Shengjie Lai, an epidemiologist at the University of Southampton, UK, and a co-author of the study, says the model estimates that Thailand probably imported 207 cases in the 2 weeks before travel in and out of Wuhan was restricted.

Indonesia has not reported a single case so far, and yet the country is a popular destination for Chinese tourists. Lai says it might have imported as many as 29 cases. Several other countries, including Malaysia, Vietnam, Cambodia and Australia, have also reported fewer cases than the model predicts, he says.

Although it’s possible that there have truly been no cases in Indonesia, infected people might have recovered before they were detected, says epidemiologist Andrew Tatem, a co-author of the study also at the University of Southampton. What is worrying is the chance that cases have gone undetected and the virus is spreading under the radar, he says.

Another model of SARS-CoV-2’s international spread suggests that cases in Indonesia, Thailand and Cambodia are lower than expected. Cambodia has so far reported only one case. The results of that study, based on flights out of Wuhan between January and February 2019 and authored by a team from the Harvard T.H. Chan School of Public Health in Boston, Massachusetts, were also posted on medRxiv on 5 February.

Despite the models’ predictions, Amin Soebandrio, an infectious-disease scientist and chair of the Eijkman Institute for Molecular Biology in Jakarta, is confident that Indonesia has the capacity to detect SARS-CoV-2 in people if it arrives.

But some countries in southeast Asia have limited numbers of health-care workers, hospital beds, support staff, ventilators and other equipment, and would struggle to respond to a surge in cases of the virus, says Richard Coker, a retired public-health physician based in Bangkok.

Tedros Adhanom Ghebreyesus, director-general of the World Health Organization (WHO), said the agency’s decision to declare the outbreak a global health emergency, the agency’s highest level of alarm, was mainly based on concerns that SARS-CoV-2 could spread in countries with weaker health-care systems.

For that reason, infectious-disease researchers are also worried about the virus spreading among people in Africa. The continent has yet to report any cases, and it is not as exposed as are some southeast Asian nations as a result of direct international flights from Wuhan, says Marc Lipsitch, an epidemiologist at the Harvard T.H. Chan School of Public Health and a co-author of the Harvard team’s model. But a large number of Chinese labourers work in Africa, and their travel between China and Africa is a possible route for transmission, he says.

Another model that specifically considered the risk of SARS-CoV-2 spreading to Africa found that Egypt, Algeria and South Africa are the African countries most at risk. The analysis, posted on medRxiv on 7 February, examined flights to Africa from Chinese cities that had reported infections, but it excluded cities in Hubei province, where Wuhan is located, because of the lockdown that has restricted travel from many cities there since late January.

But these three countries also have the capacity to respond effectively to an outbreak, says Vittoria Colizza, who models infectious diseases at the Pierre Louis Institute of Epidemiology and Public Health in Paris and is a co-author of the Africa study.

Colizza and her colleagues are most concerned about seven African nations that have a moderate risk of importing the virus, but whose weak health-care systems, low economic status, or unstable political situation makes them highly vulnerable. These are Nigeria, Ethiopia, Sudan, Angola, Tanzania, Ghana and Kenya.

These countries, except Sudan, are among 14 African nations that the WHO also identified as being at increased risk of importing the virus because they receive direct flights from China, or a high volume of travellers. The organization is working with those countries to be able to detect any potential cases rapidly, says Tarik Jašarević, a WHO spokesperson in Geneva, Switzerland. He says the 14 countries also need to increase their preparedness.

Until last week, many countries in Africa did not have laboratories that could diagnose SARS-CoV-2, and had to send samples abroad for testing.

But the situation is changing rapidly, says Colizza. The continent has gone from having only two labs with the capacity to confirm the virus, one in Senegal and one in South Africa, to now having at least 8, according to the WHO.

Three of the newly added labs are in Nigeria, says Chikwe Ihekweazu, the director general of the Nigeria Centre for Disease Control (CDC) in Abuja. Over the weekend, two people who had recently returned from China with suspected infections tested negative, he says.

Ihekweazu says Nigeria’s size, the volume of travellers it receives, and its vibrant economy already make it vulnerable to importing an infectious disease, and that the country’s strong business ties with China pose an additional risk.

Nigeria has ramped up screening of travellers from China and increased communication about the risks of infection to the public. But the country’s health system is already dealing with an outbreak, of the viral haemorrhagic disease Lassa fever.

Ihekweazu says the worst-case scenario for Nigeria will be if an infected person goes undetected and begins to infect others. “That is really what keeps me up at night,” he says.

17th-century Plague Doctors Were the Stuff of Nightmares BY JESSLYN SHIELDS The long, beaked mask of the plague doctor…

When: First case in Nigeria The virus was first discovered in 1969, from a case in the town of…