17th-century Plague Doctors Were the Stuff of Nightmares 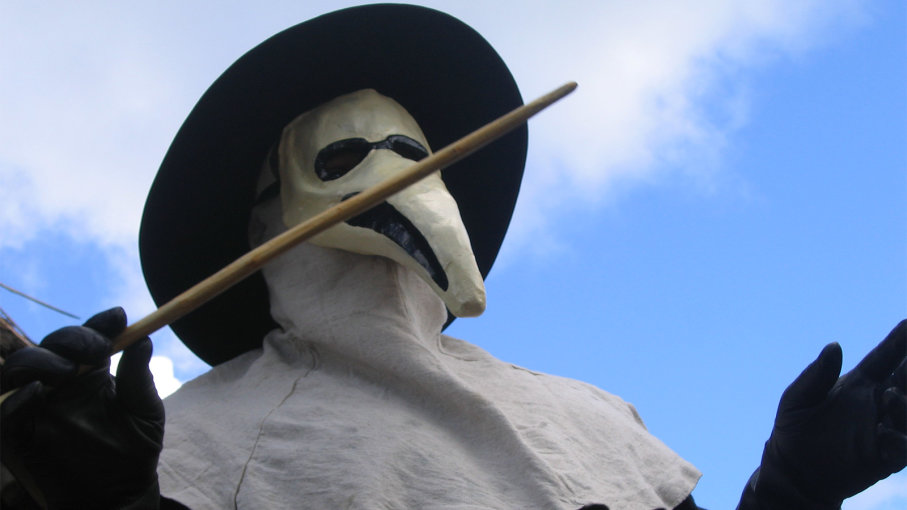 The long, beaked mask of the plague doctor was typically filled with sweet or strong-smelling herbs, such as wormwood, the main ingredient in absinthe, which were believed to filter out miasma, or bad air.
HANS SPLINTER/FLICKR (CC BY-ND 2.0)

Some of the creepiest things out there are the ones that are supposed to be funny, and some of the funniest things are the ones we're supposed to take seriously. For instance, clowns are supposed to be hilarious, and yet, according to one 2016 Vox survey, more Americans report being more afraid of clowns than climate change. Similarly, during the outbreak of the bubonic plague in Italy in the 1650s, the doctors taking care of the sick — rich and poor alike — were purportedly mocked for their strange and somewhat frightening uniforms.

Although the plague that bedeviled southern Europe during this time wasn't nearly as destructive as the Black Death of the 14th century, it is estimated to have killed over a million people in Italy and surrounding areas over the course of the decade, but mostly between 1656 and 1658. No one was safe, and since the germ theory of disease wouldn't reinvent medicine for another 200 years, the Italians figured desperate times called for desperate measures, and so they sent their physicians out in the most bonkers costume imaginable.

For starters, these doctors wore masks — but not just any mask. It was the face of a white bird, wearing goggles and a top hat. They wore long, dark robes, heavy gloves, and carried batons they used to point to things — maybe because it was hard to hear them through their masks? Eugen Holländer, a German visitor to Italy during this time, wrote about this outlandish Italian custom of physicians dressing like creepy bird people: "You believe it is a fable, what is written about Doctor Beak ... Oh, believe and don't look away, for the Plague rules Rome," he wrote in "Die Karikatur und Satire in der Medizin", a satire about the corruption of the Italian medical staff attending to plague victims of the day.

And though the 15th century Germans, like the rest of us, thought the outfit seemed a little much, there was a reason for it, even if the reasons don't have any scientific backing by today's standards. 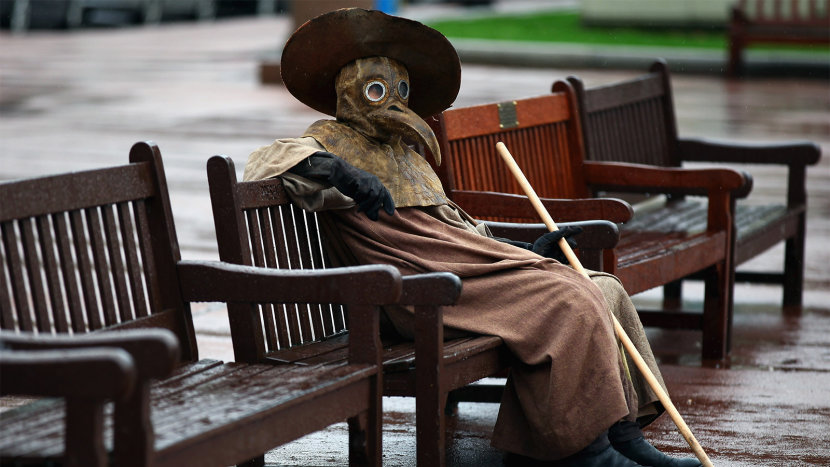 Frank To, a Glasgow-based artist, dresses in a medieval Plague Doctor costume while promoting his exhibition, "The Human Condition," in Edinburgh, Scotland.
JEFF J MITCHELL/GETTY IMAGES

"All the parts of the plague doctor's outfit, and especially the shape of the mask, were believed to provide protection for the doctor," says Winston Black, an independent historian of medicine and religion in the Middle Ages and author of "The Middle Ages: Facts and Fictions," in an email interview. "However, the protection wasn't from germs or bacteria on the patient, which would not be understood until the modern era. Instead, doctors believed that some disease, like plague, was generated by poisoned air called miasma."

Miasma — also called "bad air" or "night air" — was thought to emanate from rotting organic matter and infect people through their respiratory system or skin. Of course, contaminated water, poor hygiene and the lack of sanitation in settlements were the real culprits behind most of the epidemics that took place up until the 19th century, but how were they to know? Instead of remedying those problems, they spent their time tricking out their plague doctor costumes.

"According to one set of instructions for plague doctors, the cloak and hat should cover the entire body and be made of oiled Moroccan leather, to prevent miasma entering the pores," says Black. "The most important element was the long, beaked mask. It was to be filled with sweet or strong-smelling herbs which were believed to block or 'filter' out the miasma. One of the most popular herbs was wormwood, the main ingredient of absinthe, which has a very sharp odor. The mask could also simply hold a vinegar-soaked sponge, since the strong smell of vinegar was also thought to block miasma."

The Life of a Plague Doctor

Aside from the fact that they were made fun of by the Germans, not much is known about the plague doctors of the 17th century. Our best understanding is that they were municipal doctors, working in large cities for the urban government or the monarchy. They probably were most common in southern European cities like Rome, Milan, and some might even have been active in the south of France.

"Because they were public servants, they probably did not have 'clients,' per se," says Black. "Instead they went around the city during a plague outbreak, making decisions about which houses to lock up or condemn, which neighborhoods to quarantine, and so on."

Although there were certainly doctors attending to victims of the plague during the outbreak in the 17th century in southern Europe, evidence that anyone actually wore these outfits in a real plague outbreak is thin on the ground. Most of what we have are satirical writings and images — like modern political cartoons. 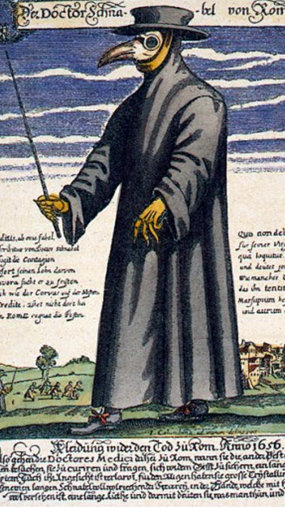 "It's telling that the most popular image, Gerhart Altzenbach's engraving of 1656, is called 'Doctor Beak from Rome,' which suggests few people took them seriously, and most considered them Italian," says Black.

Our best evidence that the elaborate costume even existed comes from a description of the French royal physician Charles de Lorme. De Lorme is sometimes given credit for inventing the getup, but according to Black, that's probably unlikely:

"There are already descriptions from the later 16th century of doctors wearing protective masks. Perhaps de Lorme should be credited with creating an outfit that was supposed to protect the entire body of the doctor. Despite this French claim to the creation of the outfit, most other Europeans agreed it was Italian in origin."

But even if the outfit wasn't as widespread as we now imagine, the development of the plague doctor and his creepy, silly costume still suggests important changes were afoot in medicine and public health during this time:

"Doctors were developing stronger ideas about how contagious diseases like plague could be, and more doctors were working in public capacities, hired to care for the health of entire cities or neighborhoods, and not just for individual, wealthy patients," says Black.

The word "malaria" comes directly from the miasma theory of disease. It means "bad air" in Italian.

Passengers are asked to keep their distance from each other Photo: AFP 44 more people on cruise ship test…