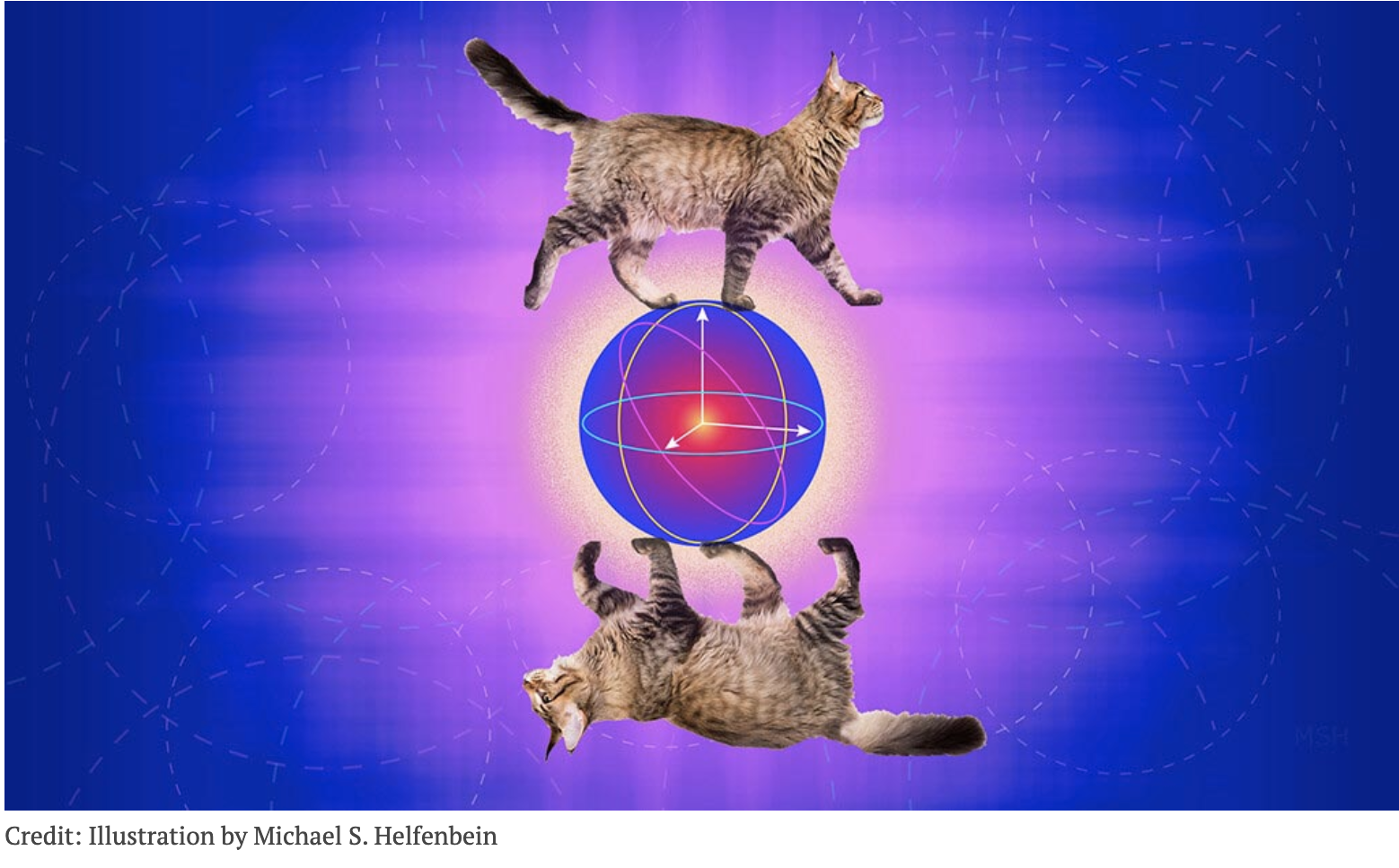 Yale physicists have developed an error-correcting cat — a new device that combines the Schrödinger’s cat concept of superposition (a physical system existing in two states at once) with the ability to fix some of the trickiest errors in a quantum computation.

It is Yale’s latest breakthrough in the effort to master and manipulate the physics necessary for a useful quantum computer: correcting the stream of errors that crop up among fragile bits of quantum information, called qubits, while performing a task.

A new study reporting on the discovery appears in the journal Nature. The senior author is Michel Devoret, Yale’s F.W. Beinecke Professor of Applied Physics and Physics. The study’s co-first authors are Alexander Grimm, a former postdoctoral associate in Devoret’s lab who is now a tenure-track scientist at the Paul Scherrer Institute in Switzerland, and Nicholas Frattini, a graduate student in Devoret’s lab.

Quantum computers have the potential to transform an array of industries, from pharmaceuticals to financial services, by enabling calculations that are orders of magnitude faster than today’s supercomputers.

In a traditional computer, information is encoded as either 0 or 1. The only errors that crop up during calculations are “bit-flips,” when a bit of information accidentally flips from 0 to 1 or vice versa. The way to correct it is by building in redundancy: using three “physical” bits of information to ensure one “effective” — or accurate — bit.

In contrast, quantum information bits — qubits — are subject to both bit-flips and “phase-flips,” in which a qubit randomly flips between quantum superpositions (when two opposite states exist simultaneously).

Until now, quantum researchers have tried to fix errors by adding greater redundancy, requiring an abundance of physical qubits for each effective qubit.

Enter the cat qubit — named for Schrödinger’s cat, the famous paradox used to illustrate the concept of superposition.

The idea is that a cat is placed in a sealed box with a radioactive source and a poison that will be triggered if an atom of the radioactive substance decays. The superposition theory of quantum physics suggests that until someone opens the box, the cat is both alive and dead, a superposition of states. Opening the box to observe the cat causes it to abruptly change its quantum state randomly, forcing it to be either alive or dead.

“Our work flows from a new idea. Why not use a clever way to encode information in a single physical system so that one type of error is directly suppressed?” Devoret asked.

Unlike the multiple physical qubits needed to maintain one effective qubit, a single cat qubit can prevent phase flips all by itself. The cat qubit encodes an effective qubit into superpositions of two states within a single electronic circuit — in this case a superconducting microwave resonator whose oscillations correspond to the two states of the cat qubit.

“We achieve all of this by applying microwave frequency signals to a device that is not significantly more complicated than a traditional superconducting qubit,” Grimm said.

“This makes the system we have developed a versatile new element that will hopefully find its use in many aspects of quantum computation with superconducting circuits,” Devoret said.

Co-authors of the study are Girvin, Shruti Puri, Shantanu Mundhada, and Steven Touzard, all of Yale; Mazyar Mirrahimi of Inria Paris; and Shyam Shankar of the University of Texas-Austin.

What would happen to Earth if humans went extinct? By Emma Bryce Nature always finds a way. Deep within…