What would happen to Earth if humans went extinct? 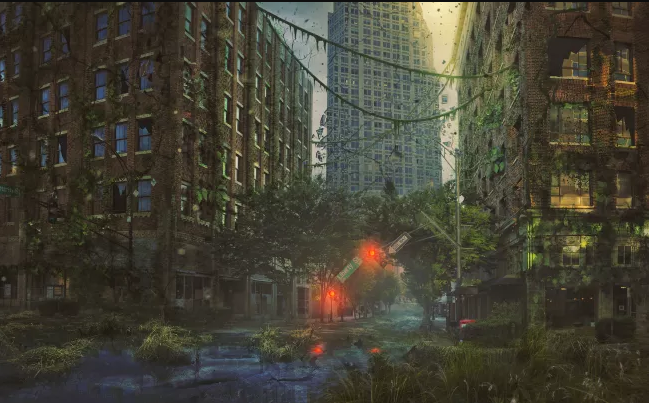 Deep within Guatemala's rainforest sits one of the most famous remnants of the Maya civilization: a roughly 2,000-year-old citadel turned to ruins called Tikal. When Alan Weisman hiked through the surrounding region, he discovered something fascinating along the way: "You're walking through this really dense rainforest, and you're walking over hills," said Weisman, author and journalist. "And the archaeologists are explaining to you that what you're really walking over are pyramids and cities that haven't been excavated."

In other words, we know about sites like Tikal because humans have gone to great efforts to dig up and restore their remains. Meanwhile, countless other ruins remain hidden, sealed beneath forest and earth. "It's just amazingly thrilling how fast nature can bury us," Weisman told Live Science.

This scene from the rainforest allows us a glimpse of what our planet could look like, if humans simply stopped existing. Lately, that idea has been especially pertinent, as the global COVID-19 pandemic has kept people inside, and emboldened animals to return to our quieter urban environments — giving us a sense of what life might look like if we retreated further into the background. Weisman, who wrote "The World Without Us" (Thomas Dunne Books, 2007), spent several years interviewing experts and systematically investigating this question: What would happen to our planet — to our cities, to our industries, to nature — if humans disappeared?

A different kind of skyline

There are several developing theories for what could drive humanity to extinction, and it is unlikely that we'd all simply disappear in an instant. Nevertheless, imagining our sudden and complete eradication from the planet — perhaps by an as-yet undiscovered, human-specific virus, Weisman said — is the most powerful way to explore what could occur if humans left the planet.

In Weisman's own research, this question took him firstly into cities, where some of the most dramatic and immediate changes would unfold, thanks to a sudden lack of human maintenance. Without people to run pumps that divert rainfall and rising groundwater, the subways of huge sprawling cities like London and New York would flood within hours of our disappearance, Weisman learned during his research. "[Engineers] have told me that it would take about 36 hours for the subways to flood completely," he said.

Lacking human oversight, glitches in oil refineries and nuclear plants would go unchecked, likely resulting in massive fires, nuclear explosions and devastating nuclear fallout. "There's going to be a gush of radiation if suddenly we disappear. And that's a real wildcard, it's almost impossible to predict what that's going to do," Weisman said. Similarly, in the wake of our demise, we'd leave behind mountains of waste — much of it plastic, which would likely persist for thousands of years, with effects on wildlife that we are only now beginning to understand.

Meanwhile, petroleum waste that spills or seeps into the ground at industrial sites and factories would be broken down and reused by microbes and plants, which would probably take decades. Persistent organic pollutants (POPs) — human-made chemicals such as PCBs that currently can’t be broken down in nature — would take much longer, Weisman says. "Some of these POPs may be around until the end of time on Earth. In time, however, they will be safely buried away." The combined rapid and slow release of all the polluting waste we leave behind would undoubtedly have damaging effects on surrounding habitats and wildlife. (But that doesn't necessarily mean total destruction: We need only look at the rebounding of wildlife at the site of the Chernobyl nuclear disaster to understand that nature can be resilient on short timescales, even under such extremes.)

While that polluting legacy unfolds, water running underground in cities would corrode the metal structures that hold up the streets above subterranean transport systems, and whole avenues would collapse, transformed suddenly into mid-city rivers, Weisman explained. Over successive winters, without humans to do regular de-icing, pavements would crack, providing new niches for seeds to take root — carried on the wind and excreted by overflying birds — and develop into trees that continue the gradual dismemberment of pavements and roads. The same would happen to bridges, without humans there to weed out rogue saplings taking root between the steel rivets: coupled with general degradation, this could dismantle these structures within a few hundred years.

With all this fresh new habitat opening up, nature would stoically march in, pasting over the formerly concrete jungle with grasslands, shrubbery and dense stands of trees. That would cause the accumulation of dry organic material, such as leaves and twigs — providing the perfect fodder for fires sparked by lightning, which would go roaring through the maze of buildings and streets, potentially razing whole parts of cities to the ground. "Fires are going to create a lot of charred material that will fall to the street, which is going to be terrific for nurturing biological life. The streets will convert to little grasslands and forests growing up within 500 years," as Weisman tells it.

Over hundreds of years, as buildings are subjected to sustained damage from erosion and fire, they would degrade, he said. The first to topple would be modern glass and metal structures that would shatter and rust. But tellingly, "buildings that will last the longest are the ones made out of the Earth itself" — like stone structures, Wesiman added. Even those would become a softened version of their former selves: eventually the defined, iconic skylines we know so well today would be no more.

Where the wild things are

Looking beyond the city limits to the great swathes of farmland that currently cover half of Earth's habitable land, there would be a swift recovery of insects, as the application of pesticides and other chemicals ceases with humanity's demise. "That's going to start a real cascade of events," Weisman said. "Once the insects are doing better, then the plants are going to do much better, then the birds." Surrounding habitats — plant communities, soils, waterways and oceans — will recover, free from the far-reaching influence that chemicals have on ecosystems today. That, in turn, will encourage more wildlife to move in and take up residence.

This transition will precipitate an increase in biodiversity on a global scale. Researchers who have modeled the diversity of megafauna — the likes of lions, elephants, tigers, rhinoceroses and bears — across the planet have revealed that the world used to be exceptionally rich in these species. But that changed when humans began to spread across the planet, hunting these animals and invading their habitats. As humans migrated out of Africa and Eurasia to other parts of the globe, "we see a consistent increase in extinction rates following the arrival of humans," explained Søren Faurby, a lecturer in macroecology and macroevolution at the University of Gothenburg in Sweden. "In Australia, there is an increase in extinction near 60,000 years ago. In North and South America, an increase is seen [about] 15,000 years ago, and in Madagascar and the Caribbean islands a drastic increase is seen a few thousand years ago."

Without humans spreading to the far corners of the Earth and driving down megafauna populations, the entire planet could have been as diverse in these species as the famed Serengeti in East Africa is today, Faurby told Live Science. "Effectively, there used to be large animals everywhere, and there would be large animals everywhere around the globe without human involvement." His research has revealed that without humanity's heavy species impact, the central United States, and parts of South America, would be the most megafauna-rich places on Earth today. Animals like elephants would be a common sight in the Mediterranean Islands. There would even be rhinoceroses across most of northern Europe.

Without humans, could Earth reclaim that diversity? Even if we did suddenly disappear from the picture, it would still take millions of years for the planet to recover from those past extinctions, Faurby and his colleagues have calculated. They investigated what it would take to return to a baseline level of species richness and a distribution of large-bodied animals across the planet that mirrors what we had before modern humans fanned out across the globe. They estimate it would take "somewhere between 3 and up to 7 million or more years to get back to the pre-extinction baseline," explained Jens-Christian Svenning, a professor of macroecology and biogeography at Aarhus University in Denmark, and a colleague of Faurby's who has worked on the same body of research.

Basically, "if there weren't human impacts, the whole world would be one big wilderness," Svenning told Live Science.

The planet might eventually become lusher and more diverse — but we can't dismiss the effects of climate change, arguably humanity's most indelible impact on the planet. Weisman notes the inherent uncertainty in making useful predictions about what will unfold. For instance, if there are explosions at industrial plants, or oil or gas wellheads that continue to burn long after we're all gone, huge amounts of heat-trapping carbon dioxide would continue to be discharged into the atmosphere, he explained.

Carbon dioxide doesn't stay suspended in the atmosphere forever: Our oceans play an essential role in absorbing vast amounts of carbon dioxide from the air. But there are still limits to how much of it the ocean can take up without its own waters acidifying to unhealthy levels — potentially to the detriment of thousands of marine species. There's also a cap on how much the sea can physically absorb, meaning it isn't simply the bottomless carbon sink it's often thought to be.

As it stands, current levels of CO2 in our atmosphere will already take thousands of years to be fully removed from the atmosphere. (Based on the research he did for his own book, Weisman found it could take upwards of 100,000 years.) And if the sea reaches its cap and more greenhouse gases stay suspended up in the atmosphere, the resulting continuous warming will lead to further melting of the polar ice caps, and the release of even more greenhouse gases from softening permafrost. This will cycle into an ongoing, climate-altering, feedback loop. All this means that we can confidently assume that climate change's impacts will last long after we leave.

But to this, Weisman offered a word of hope. During the Jurassic period, he said, there was five times as much carbon dioxide in the atmosphere as there is today, which led to a dramatic increase in ocean acidity. Evidently, however, there must have been marine species that coped with these extremes, and went on to evolve and be part of the planet we know today. Which is to say that ultimately, despite climate extremes and the immense losses they can incur, "nature always finds a way," Weisman said.

There might one day be a world without humans, but that won't stop the rest of the planet from soldiering on.

But taking a glimpse at this imagined future might also prompt us to be more mindful of our actions, in a bid to preserve our own spot on the planet, too.

With that distraction gone, he found, he could focus people's attention on the planet, and the real point he wanted to make: "I wanted people to see how beautifully nature could come back, and even heal a lot of the scars that we've placed on this planet. Then to think, is there possibly a way to add ourselves back into this picture of a restored Earth?"