The coronavirus pandemic has caused oil demand to drop so rapidly that the world is running out of room to store barrels. At the same time, Russia and Saudi Arabia flooded the world with excess supply.
That double black swan has caused oil prices to collapse to levels that make it impossible for US shale oil companies to make money. US crude for May delivery turned negative on Monday -- something that has never happened since NYMEX oil futures began trading in 1983. It was easily the oil market's worst day on record.

US crude for June delivery is still trading above $20 a barrel — but even that's disastrous.

"$30 is already quite bad, but once you get to $20 or even $10, it's a complete nightmare," said Artem Abramov, head of shale research at Rystad Energy.

Many oil companies took on too much debt during the good times. Some of them won't be able to survive this historic downturn.
In a $20 oil environment, 533 US oil exploration and production companies will file for bankruptcy by the end of 2021, according to Rystad Energy. At $10, there would be more than 1,100 bankruptcies, Rystad estimates.

"At $10, almost every US E&P company that has debt will have to file Chapter 11 or consider strategic opportunities," Abramov said. 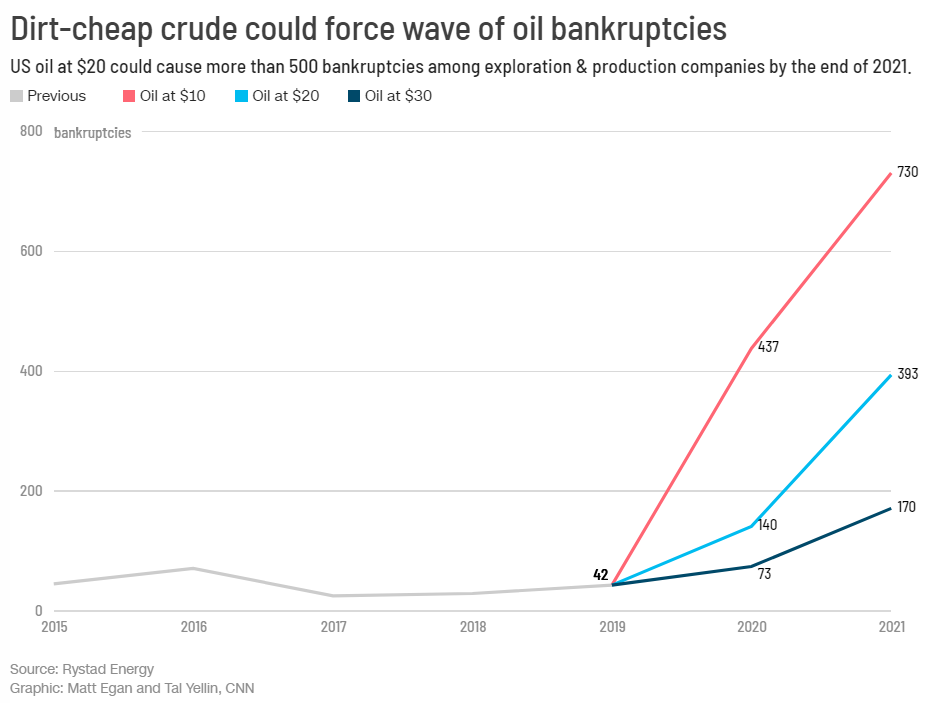 The most stunning part of the record low in oil prices is that it comes after Russia and Saudi Arabia agreed to end their epic price war after President Donald Trump intervened. OPEC+ agreed to cut oil production by a record amount.

Trump said the OPEC+ agreement would save countless jobs and much-needed stability to the oil patch.

"This will save hundreds of thousands of energy jobs in the United States," Trump tweeted on April 12. "I would like to thank and congratulate President Putin of Russia and King Salman of Saudi Arabia." 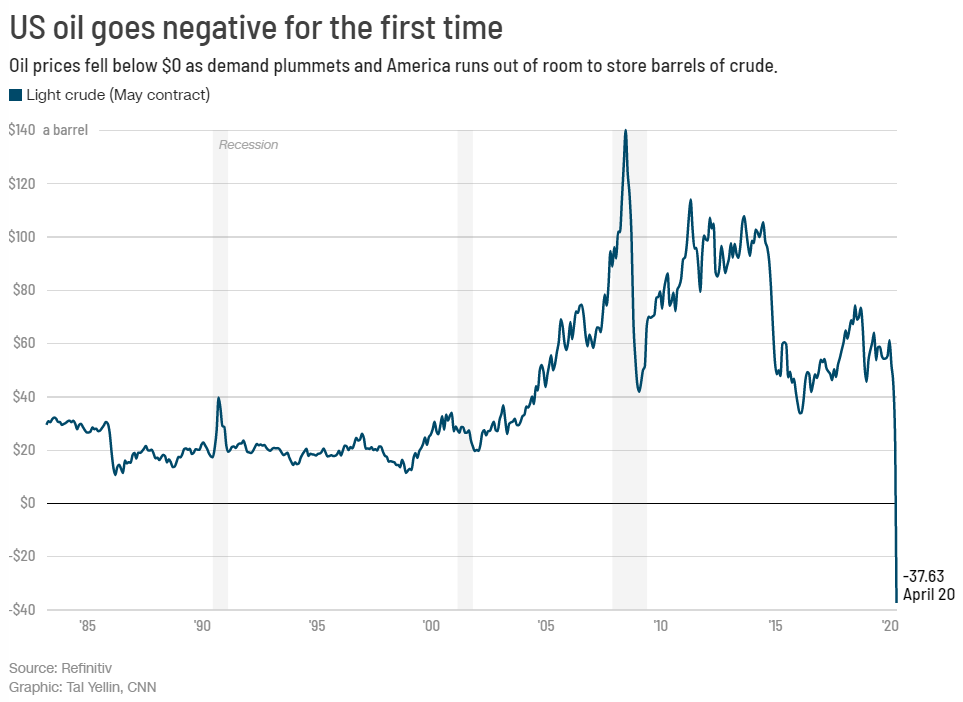 Yet crude has kept crashing, in part because those production cuts don't kick in until May. And demand continues to vanish because jets, cars and factories are sidelined by the coronavirus pandemic.

The hope in the oil industry is that Monday's negative prices are somewhat of a fluke caused by the rolling over futures contracts.

The record low in the May contract comes on very thin trading volume ahead of Tuesday's expiration. That's because there are concerns that there will be no room to store those barrels delivered in May. The June contract, however, only dropped around 10% to $22 a barrel. And Brent crude, the world benchmark, fell just 5% to $26.50 a barrel.

Still, oil contracts roll over each month and they don't crash to record lows.

"There will be a lot of companies that don't survive this downturn," said Ryan Fitzmaurice, energy strategist at Rabobank. "This is one of the worst on record."

'Unprecedented' stress in the oil industry

Signs of stress abound in the oil patch.

The S&P 500's energy sector has lost more than 40% of its value this year — despite the dramatic rebound in the overall stock market over the past month.

Noble Energy (NBL), Halliburton (HAL), Marathon Oil (MRO) and Occidental (OXY) have all lost more than two-thirds of their value. Even Dow member ExxonMobil (XOM) is down 38%.

Whiting Petroleum became the first domino to fall when the former shale star filed for Chapter 11 protection on April 2. But it certainly won't be the last.

Rystad's $20 scenario predicts more than $70 billion of oil company debt will get reorganized in bankruptcy, followed by $177 billion in 2021. And that only accounts for exploration and production companies, not the servicing industry that provides the tools and manpower to drillers.

The key will be how long oil prices stay dirt cheap. A rapid rebound in prices could allow many oil companies to avoid bankruptcy.

Buddy Clark, co-chair of the energy practice at Houston law firm Haynes and Boone, said his firm is "extremely busy" working on potential oil bankruptcies. Haynes and Boone has been forced to pull lawyers from other areas of the firm to work on the oil problem.

"I don't think I've seen anything like it in my lifetime. It's unprecedented," said Clark, who started working in the industry in 1982.

Clark thinks that despite the further collapse in prices, there will still be only — "only" — 100 oil bankruptcies in 2020.
"It's hard to believe that 100 bankruptcies is the optimistic view. That just shows you where we are," Clark said.

Liquidations could be on the way

There would probably be more bankruptcies already if it weren't for the extreme volatility in oil prices. Clark said companies are having trouble drawing up restructuring plans because they don't know what the price of the commodity will be.

"Ironically, the lower price has slowed down the process," Clark said. "A number of companies may have teed up filings but they need to go back to the drawing board."

The dire outlook in the oil industry will make it very difficult for companies attempting to reorganize in Chapter 11 proceedings to get the required financing and support. Debtholders who would normally swap their debt for equity may not want that equity.

That means, unlike the 2014-2016 crash, some oil companies may not survive altogether.

"Chapter 11 requires financial sponsors to back you. You may see more Chapter 7 liquidations," said Reid Morrison, US energy leader at PwC.

The nightmare scenario could present lucrative buying opportunities for the industry's biggest players. That's because struggling oil companies, either in bankruptcy or before it, will be forced to sell off prime acreage -- at fire sale prices. Exxon and Chevron (CVX), the industry's supermajors, could be tempted to make acquisitions.

"Those with strong balance sheets will be able to take advantage of the situation," said Morrison.

However, he noted the supermajors will be "cautious about pulling the trigger" in the next six months because they must defend their coveted dividends first.

The oil crash has set off a guessing game about which companies will be next to succumb to bankruptcy. The most vulnerable companies are the ones that piled on too much debt, face looming debt maturities and can't generate cash flow to even make their interest payments.

Rystad's Abramov said "no one would be surprised" if Chesapeake Energy (CHK) and Oasis Petroleum (OAS) were forced to consider bankruptcy.

Chesapeake recently suspended dividend payments on preferred stock. Its stock price crashed so low that it turned to a one-for-200 reverse stock split to comply with exchange requirements.
Shale driller Oasis has lost more than 90% of its value this year. Its stock is trading below 30 cents.

Although American frackers rebounded from the 2014-2016 oil crash, there are concerns the shale industry could be permanently scarred.
Investors were already tired of the industry's horrible returns following years of excessive spending and oversupply. And that was before the great oil crash of 2020.