Why Is the U.S. Dollar the World's Currency? 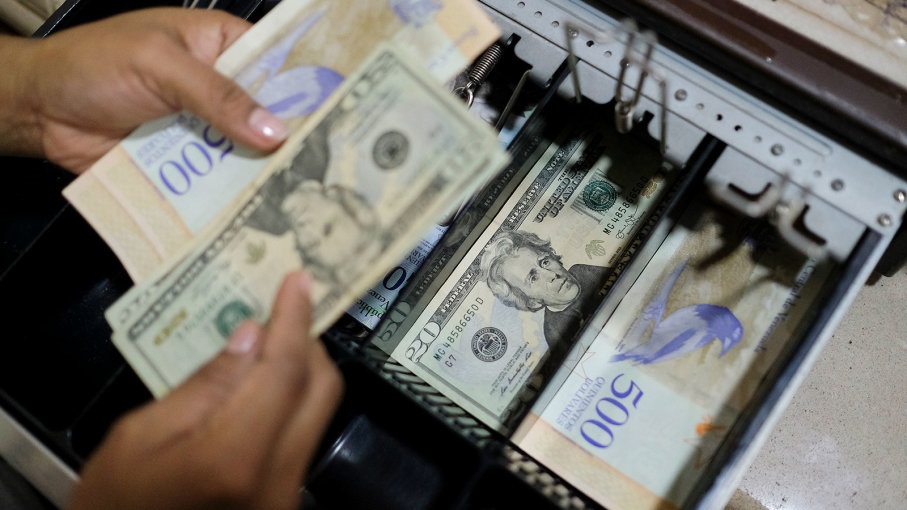 U.S. $20 bills are seen in the cash drawer of a bakery shop in Caracas, Venezuela on June 26, 2019. Venezuelans have turned to the U.S. dollar to pay for everyday purchases since their own currency, the bolivar, has devalued by 95 percent.

When economic times are uncertain, people want to put their money in something solid. That helps explain why 80 percent of all $100 bills in circulation are now held outside of the United States. (That's up from only 30 percent back in 1980.) The steep rise in the number of $100 bills held overseas — close to two C-notes for every person on the planet — is a signal that people around the world recognize the dollar as the de facto global currency. They have confidence that if their local currency goes belly up, the dollar will hold steady.

It's not only individuals that are stuffing $100 bills under their mattresses for a rainy day — it's foreign governments, too. Governments don't stockpile physical dollars in their central banks, but they do buy up loads of U.S. Treasury Bonds and T-Bills, which are valued in dollars.

As of January 2020, Japan and China each owned more than $1 trillion in U.S. Treasury securities followed by the United Kingdom ($372 billion) and Brazil ($283 billion). According to the International Monetary Fund, more than 61 percent of the world's cash reserves are held in dollars. The euro is in second place at 20 percent.

When even an economic powerhouse like China holds a trillion U.S. dollars in reserve, that's a good sign that the dollar is still considered the "mightiest" of the global currencies.

The dollar wasn't always the world's de facto currency, though. So, what changed?

Before World War II, all global currencies were backed by gold and each government guaranteed that its money was good for a certain amount of gold. Then came the Bretton Woods agreement of 1944, which created the World Bank and the International Monetary Fund, and also established the U.S. dollar as the new gold. (The U.S. held most of the world's gold supply.)

The dollar continued to dominate during the post-WWII boom years. Jonathan David Kirshner, a professor of political science and international studies at Boston College, says that the rise of the "dollar order" was built on four pillars: the robustness of the U.S. economy, the widespread belief in the American model of finance, the wealth of U.S. financial institutions and America's leading role in international affairs.

"Most of the world's monetary relations were orchestrated between the U.S. and its political allies and military dependencies," says Kirshner, who co-edited a book on "The Future of the Dollar." "It was natural to be conducted in dollars."

The Bretton Woods fixed exchange rate scheme collapsed in the 1970s, when Richard Nixon took the dollar off the gold standard during a period of domestic inflation, and many industrialized economies chose to "float" their currencies on the open market. At that time, some economists began to predict the downfall of the dollar. Not that it would lose value, but that it would lose its dominance as the world's de facto currency.

'If Not the Dollar, Then What?'

Over the decades, most of those "pillars" that made the dollar king of the postwar economy have been toppled, says Kirshner. Recessions, stock market bubbles and the global financial crisis have revealed cracks in the American financial model, and the U.S. has lost some of its political dominance, with many governments and corporations choosing to do business with China or Europe instead.

Yet the numbers show that the dollar is still the currency that nations and individuals turn to as a "safe harbor" in economic storms. But why?

"The ultimate reason is a simple one," says Kirshner, "the lack of a plausible alternative. If not the dollar, then what?"

There have been periodic calls to shift more reserve holdings to the euro, the Chinese RMB or even back to gold, but the dollar still reigns supreme. When countries shop for a reserve currency that's stable, secure and liquid (easy to convert back to local money), the dollar is still the default. In fact, some countries such as Panama and El Salvador use the U.S. dollar as their legal tender. The U.S. government doesn't have to give approval for another country to use the dollar as its official currency.

What About a One World Currency?

The first reason is political. There is simply no political will to have one world government or one world currency.

The second reason we won't see an "Earth dollar" (or the whole world using the U.S. dollar for their official currency) any time soon has to do with an economic theory called "optimal currency area" that states that a single currency only operates efficiently over a relatively small geographic area — the size of a country, for example, not a continent. That's because different regions might be experiencing very different economic conditions at the same time. One country might be in recession, for example, while another is booming.

That's one of the reasons why the euro hasn't supplanted the dollar as the global currency. The eurozone itself is not an optimal currency area, says Kirschner, which means that EU authorities have to enact monetary policies that somehow serve economies in very different financial conditions, like Germany and Greece. Events like the eurozone debt crisis further eroded faith in the euro as the next default currency.

Criminal networks and corrupt officials routinely deal in $100 bills because they're untraceable, which led former U.S. Treasury Secretary Larry Summers to recommend taking all large bills out of circulation.

By BRIAN DEAGON The disruption of society and business due to the coronavirus pandemic has battered the stock market,…

Why the iPhone SE 2020 is actually Apple's cheapest phone of all time By Gareth Beavis Opinion: the iPhone…