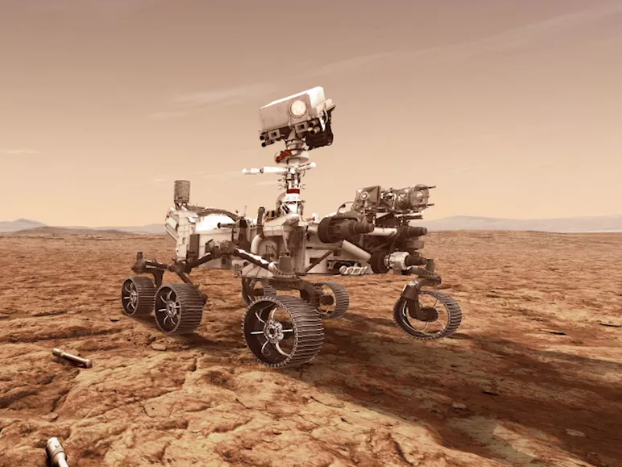 On July 30th, a six-wheeled NASA rover the size of an SUV will embark on its journey to Mars — the beginning of a quest to decode the secrets of the Red Planet’s past. Equipped with a suite of instruments and a sophisticated drilling system, the rover is tasked with answering a question that has confounded scientists for centuries: has Mars ever hosted life?

The rover, named Perseverance, is one of NASA’s most ambitious planetary missions to date. Not only is the bot designed to analyze Martian rocks for signs of past life, but the rover will also cache dozens of samples to leave somewhere on the Martian surface. These samples will weather the next decade on Mars, awaiting the day that another robotic spacecraft arrives, picks them up, and blasts off. The samples will then travel back to our planet, where eager scientists will be waiting to receive them.

It’s all part of a herculean operation known as Mars Sample Return. The goal is to bring pristine pieces of Martian material back to Earth where we can study them in sophisticated labs. “If you want to confirm that life exists beyond the Earth, you probably cannot do it with any instruments that can be flown today,” Kenneth Farley, the project scientist for Perseverance and a professor at the California Institute of Technology, tells The Verge. “You really have to bring samples back to the lab.”

Perseverance is just the first — extremely complicated — step in that sample return process. If successful, Perseverance will neatly package dozens of samples of the Martian surface that may one day see Earth. They may tell us if life existed on Mars or if it’s always been a barren planet. “This is really a unique — really a once-in-a-lifetime — opportunity to get samples from a known location on Mars,” Tanja Bosak, a professor of geobiology at MIT who is a participating scientist on the mission, tells The Verge.

THE SEARCH FOR LIFE ON MARS

In 1976, NASA sent two landers, called Viking 1 and Viking 2, to the Martian surface to actively look for signs of life. While the pair learned a great deal about Mars, they didn’t turn up any compelling evidence that life had ever existed on the planet, putting a damper on the search for a while.

NASA followed up the Viking landers with orbiters that studied Mars from above as well as rovers that crawled across the planet’s surface.

Data from NASA’s most recent rover, Curiosity, reinvigorated the search for life. Dropped into a basin called Gale Crater in 2012, Curiosity’s instruments quickly determined that the region was once a giant lake. 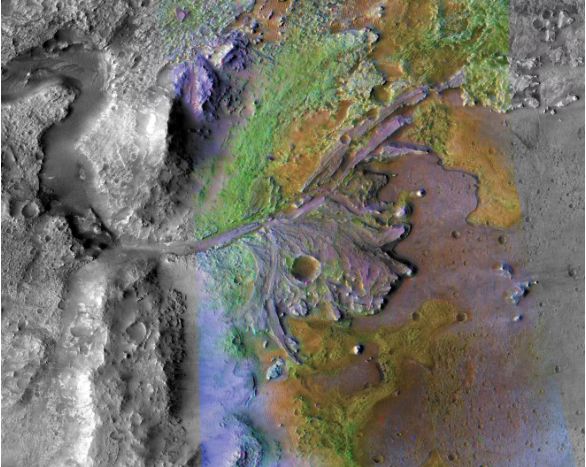 A false color image of Jezero Crater, as seen from above from NASA’s Mars Reconnaissance Orbiter

Fast-forward to today, and NASA picked perhaps the most tantalizing place for Perseverance to explore: a region on Mars called Jezero Crater. Scientists are fairly certain that the crater was once home to a flowing river that poured into a lake.

“We are going to see what looks to us from orbit as a very, very habitable environment,” Ken Williford, the deputy project scientist for Perseverance at NASA’s Jet Propulsion Laboratory, tells The Verge. “If there were microbes in that lake, they had every opportunity to colonize, especially, say, on the edge of the lake where you often find pond scum on Earth or this sort of just green goo at the edge of a pond or a lake. That’s like our holy grail.”

Once Perseverance makes it to Jezero, the hunt will be on for so-called “biosignatures.” A biosignature could be a rock, mineral, or structure that is formed by living things. It could be chemicals that are produced by biological processes or organic matter — molecules made of carbon and hydrogen that comprise all of Earth life. 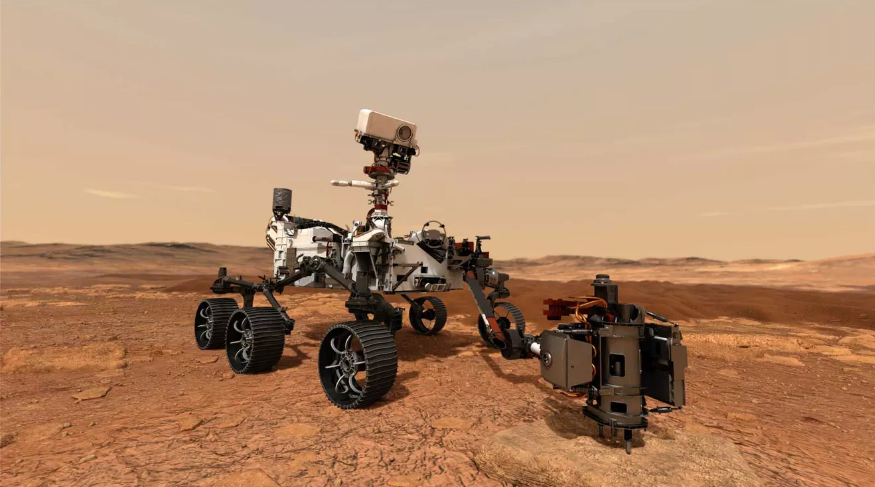 An artistic rendering of Perseverance with its primary robotic arm extended, drilling into the surface of Mars.

Perseverance is decked out with seven instruments, most of which will look for biosignatures as the rover surveys the Martian terrain. They include cameras, radar, a laser, and more. Perseverance has a few side projects, too. One instrument called MOXIE will attempt to turn carbon dioxide in the Martian atmosphere into oxygen — a technique that may be useful for future human explorers of Mars. The glitziest addition is a tiny helicopter, which will attempt to fly through the thin Martian atmosphere.

The real pièce de résistance of Perseverance is its sampling system. “The sample return aspect is really sort of the biggest motivating objective of Mars 2020,” Williford says. “It’s our reason for being.” A robotic arm will extend outward from the front of the rover and drill into the surface with one of nine drill bits. The drilled material will be shuffled into one of the 43 titanium sample tubes that Perseverance brought to Mars. Once filled, a tube is brought into the belly of the rover, where another robotic arm takes pictures of the sample, hermetically seals it, and then stores it for later.

The goal is to get at least 20 samples of diverse material that can be returned to Earth one day, though the option is there to fill all 43 tubes. 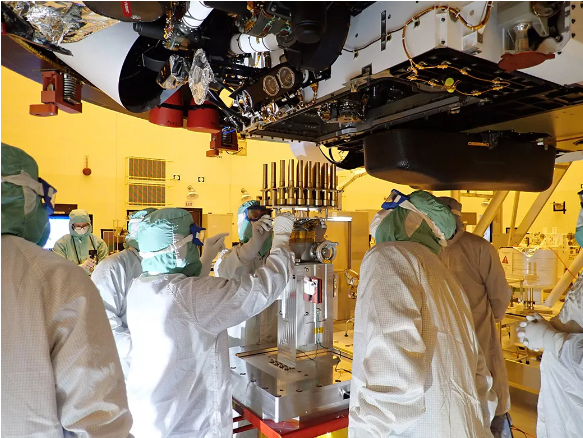 Engineers load the titanium sample tubes into Perseverance ahead of launch.

At some point, scientists will make the decision to drop the sample tubes somewhere on the Martian surface. Since they’re made of titanium, the sample containers should be able to withstand the cold Martian environment — as well as any potential dust storms — without losing the precious contents inside them. They’ve also been painted white in case things heat up on Mars, too.

GETTING TO THE LAUNCHPAD

Because of the nature of Perseverance’s mission, many extra precautions had to be taken. Above all, the rover has to be incredibly clean to avoid any contamination of Mars. Engineers baked the rover at more than 300 degrees Fahrenheit (150 degrees Celsius), to completely sterilize it.

During the final stretch of launch preparations, the COVID-19 pandemic hit, forcing engineers to completely rework their plans. The team worked in shifts to enforce social distancing and added extra cleaning and disinfection precautions to make sure they didn’t spread the virus to their colleagues. There were struggles with the rover’s ride to Mars, too. The Atlas V rocket slated to launch the mission experienced some issues during a test in June, forcing the team to push back the launch by a few weeks. There’s only a small window of time this summer for Perseverance to launch when Mars and Earth come closest together on their orbits. If the rover can’t launch before late August, NASA may have to wait another two years to try again.

Perseverance is now days away from its scheduled launch on July 30th at 7:50AM ET. The vehicle will take off from Cape Canaveral, Florida, putting Perseverance en route to Mars with a scheduled arrival date sometime in February 2021. It’s the same month that two other spacecraft will arrive at Mars: an orbiter built by the UAE called Hope and China’s Tianwen-1 mission, which also includes a rover.

Next February, Perseverance will descend to Mars, a daring feat that only eight missions have successfully pulled off. It’ll be the most harrowing part of the journey, often described as seven minutes of terror. But if Perseverance can get down to the ground in one piece, the real work can begin. Whether or not Perseverance finds life, it could give us important insights into the nature of our Solar System — and the Universe.

“The central question of ‘Is there life on other planets?’ — it really comes down to: is the origination of life some kind of magic spark that happens only incredibly rarely, or alternatively, is it the kind of thing that is inevitable?” says Farley. “What we can do is we can go to such place in our own solar system on Mars and ask the question, ‘Is life ubiquitous?’”

From 【无聊熊猫】 We often hear about the biggest animals that would easily tower over humans twice, thrice, and some…

From 【哈佛商学院刊物】 We often hear that exceptional achievers tend to sleep very little. But for all the heroic showing-off…