What explains the pay gap in women's soccer? 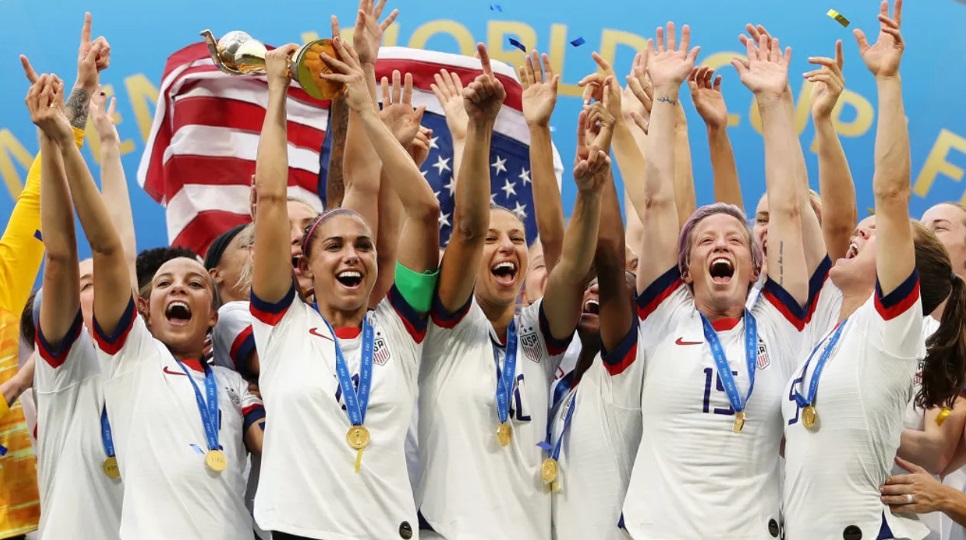 The U.S. women's soccer team won its fourth World Cup title on Sunday with a 2-0 victory over the Netherlands. Shortly after, the crowd started chanting "equal pay!" — referencing the claim that the United States Soccer Federation (aka U.S. Soccer) unjustly pays female players less than male players. It's been a long-standing point of contention between female players and U.S. Soccer — which is the body that governs America's national soccer teams — though it was only in March that all 28 female players on the U.S. team decided to sue U.S. Soccer.

The class-action lawsuit claimed that "female players have been consistently paid less money than their male counterparts. This is true even though their performance has been superior to that of the male players – with the female players, in contrast to male players, becoming world champions." The complaint added that U.S. Soccer also failed to provide female players with equal working conditions, promotion and support.

In a May court filing, U.S. Soccer argued that the pay gap is "based on differences in aggregate revenue generated by the different teams and/or any other factor other than sex." Last week, more than 50 members of Congress signed an open letter to U.S. Soccer President Carlos Cordeiro in support of the women's team. Some lawmakers also expressed support on Twitter. Meanwhile, the women's team's case is heading to mediation.

So, what explains the gender pay gap? How is it fair that the more-successful women's team earns less than the men's team? Does women's soccer simply generate less revenue? Is institutionalized sexism to blame?

There's no immediately clear answer, but you can get some insight by looking at the differences between the men's and women's teams in terms of revenue generation, collective-bargaining agreements and awards from FIFA.

U.S. men's teams have historically generated more revenue than women's teams. But that's beginning to change — at least in terms of gate revenues, which consist mainly of ticket sales. As The Wall Street Journal notes in a recent article:

But only about one-quarter of U.S. Soccer's total operating revenue can be attributed to gate revenues, according to the federation's financial documents. The other revenues come mainly from broadcasting and sponsorships, and it's difficult to parse out which teams contribute more to these revenues because U.S. Soccer sells sponsorships and broadcasting rights as a bundled package.

Still, there's reason to think that the recent success and popularity of the women's team is boosting revenues: Nike chief executive Mark Parker said that the U.S. women's team home jersey "is now the number one soccer jersey, men's or women's, ever sold on Nike.com in one season," according to The Washington Post.

The U.S. men's and women's teams have different collective-bargaining agreements with U.S. Soccer. The most noticeable difference lies in bonus structure and amounts. As a recent piece from The Guardian notes, male players stand to earn more money in bonuses as they progress through a World Cup. But that's just the World Cup: The men's and women's teams earn bonuses (of different kinds and amounts) in other games and tournaments, under a variety of differing conditions. Overall, men earn more in bonuses. But a recent update to the women's team deal has narrowed the bonus gap, and also made it so that female players earn a base salary (male players only earn money through bonuses).

In short, comparing earnings between male and female players is complicated, and a 1:1 comparison is impossible. For 2019, it looks like the women's team will earn more than the men's team — but only because of their extraordinary success, and the men's team's relative failure.

Understanding how the World Cup factors into the soccer pay gap requires some knowledge of the relationship between FIFA and U.S. Soccer.

FIFA runs the World Cup. It determines how much prize money the winning nation's team receives. After that team wins the World Cup, FIFA awards a predetermined purse of prize money to that nation's soccer federation — but those purses vary drastically by gender. As The Washington Post notes:

Why such a discrepancy? The men's World Cup currently generates more money, by far. For context, FIFA earned upwards of $6 billion from the 2018 men's World Cup. Meanwhile, the women's 2019 World Cup is estimated to earn FIFA about $131 million.

So, even though the U.S. women's team is more successful than the men's team, the numbers suggest that men's soccer is currently a more valuable product — especially on the international stage. That means the male players deserve to earn more, right? Needless to say, not everyone agrees.

A recent op-ed from The New York Times editorial board argues that revenue is "the wrong measuring stick" in this debate.

"United States Soccer is a nonprofit, exempted from taxation because it serves a social purpose: "To make soccer, in all its forms, a pre-eminent sport in the United States," the Times editorial board wrote. "It should be obvious to the people who run the federation that the women's team is fulfilling that mission at least as well as the men's team."

The piece also notes that it's U.S. Soccer — not FIFA — that ultimately gives award money to players, and therefore the federation could use its discretion to pay all players equally. In short, this argument acknowledges that men's soccer brings in more money overall, but says that's not the most important measure by which this debate should be judged.

(It's worth noting the obvious: This current debate about women's soccer is embedded within a broader culture war over gender equality and the gender pay gap, and it's likely that many are treating this story as a proxy battle in that broader war.)

Another point that the Times and others have made in recent days goes something like: Sure, men's soccer earns more money, but that's partly because federations aren't investing enough money into women's soccer. If they did, women's soccer would be more popular and generate more money.

For now, the women's team and U.S. soccer are heading into mediation. The federation maintains that "market realities" are responsible for the pay gap in American soccer. But that could soon change if the women's team can strike a deal with U.S. Soccer on a revenue-sharing model.

"Under this model, player compensation would increase in years in which the USSF derived more revenue from WNT activities and player compensation would be less if revenue from those activities decreased," the 28 U.S. female players wrote in their recent court complaint. "This showed the players' willingness to share in the risk and reward of the economic success of the WNT."

U.S. Soccer "categorically rejected" this model. But the U.S. National Soccer Team Players Association — which is the players union for the United States men's national soccer team — has expressed support for it.

"The United States National Soccer Team Players Association fully supports the efforts of the US Women's National Team Players to achieve equal pay," reads the statement. "Specifically, we are committed to the concept of a revenue-sharing model to address the US Soccer Federation's 'market realities' and find a way towards fair compensation."

Your Diet Might Be Causing Anxiety and Depression BY DEREK BERES You are what you eat. We've known this…