Who Put the Baby in the King Cake? 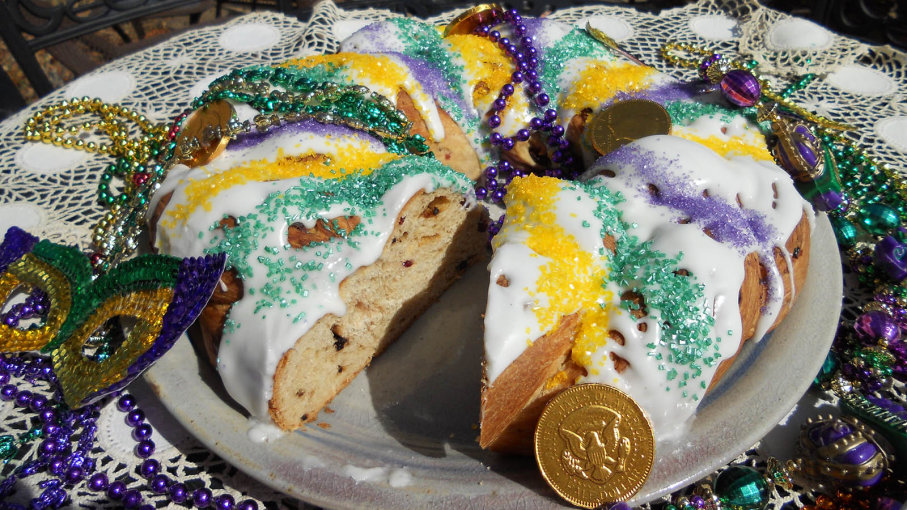 King cake is made of rich brioche dough and covered in green, purple and gold sprinkles. JENNI FIELD/FLICKR/(CC BY-NC-SA 2.0)

America is a land of traditions, both homegrown and borrowed, that mark its beloved holidays with glee, cheer and occasionally mouth-watering desserts. Enter king cake — the frosted coffeecake-like sweet roll typically eaten between Jan. 6 and Fat Tuesday, the day before Lent begins. It's a staple of Mardi Gras, as well as the Christian celebration of Epiphany.

For those familiar with this festive dessert, it's typically, made of rich brioche dough and a variety of fillings — think cinnamon, chocolate and cream cheese. It's always covered in a glaze and gold, green and purple sprinkles.

Of course, part of the king cake eating experience involves finding a tiny plastic baby buried within the layers of this frosted doughy treat. So why is there a baby baked into the king cake? The origins come from another world and another time.

And yes, there are kings involved. Some say king cake is named in honor of the Three Wise Men in the Bible. And in the U.S., king cake is eaten beginning Jan. 6, which happens to be Three Kings Day to celebrate when the three Magi found baby Jesus and gave him gifts.

NPR reports that eating a wreath-shaped or oval cake to honor the Three Kings has roots in Old World Spain and France that were transported to America sometime during the mid-19th century. A plastic baby figurine is hidden within the cake, supposedly causing good luck for whoever finds it. (Some try everything to avoid getting the baby because it also means they're responsible for bringing next year's king cake to the party.) 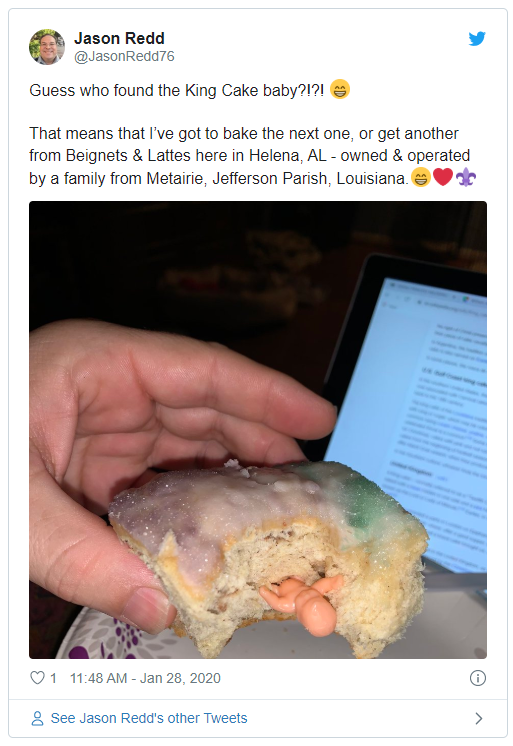 But others say the tradition started when a cake was served with a bean (perhaps a fava bean) or ring baked inside to celebrate the kickoff of the king's ball during colonial times in Louisiana. The person whose slice had the bean was crowned king or queen of all the balls until the grand finale on Mardi Gras.

It wasn't until the 1950s that a baker named Donald Entringer began putting little plastic (though some say porcelain) babies in the cakes in lieu of fava beans, and the tradition we now know was born (um, no pun intended).

So, what's with the crazy coloring on those king cakes? In keeping with the overall positive messaging of the surrounding holidays, king cakes are traditionally colored purple, gold and green — the royal colors of Mardi Gras — to represent justice, power and faith.

There are a number of different recipes on how to make the cake, but most people just buy them from their local bakery or order one online. When it comes time to eating a king cake, it's usually eaten "family style" with everyone peeling off layers like a coffeecake and sharing at once.

Though king cakes are available for only a few weeks of the year, the luck bestowed on those who end up with the tiny, plastic baby in their slice is meant to last for the rest of months to come.

The Cajun community takes the celebratory cake to the next level by filling the center with cream cheese and praline and deep-frying it to golden perfection.