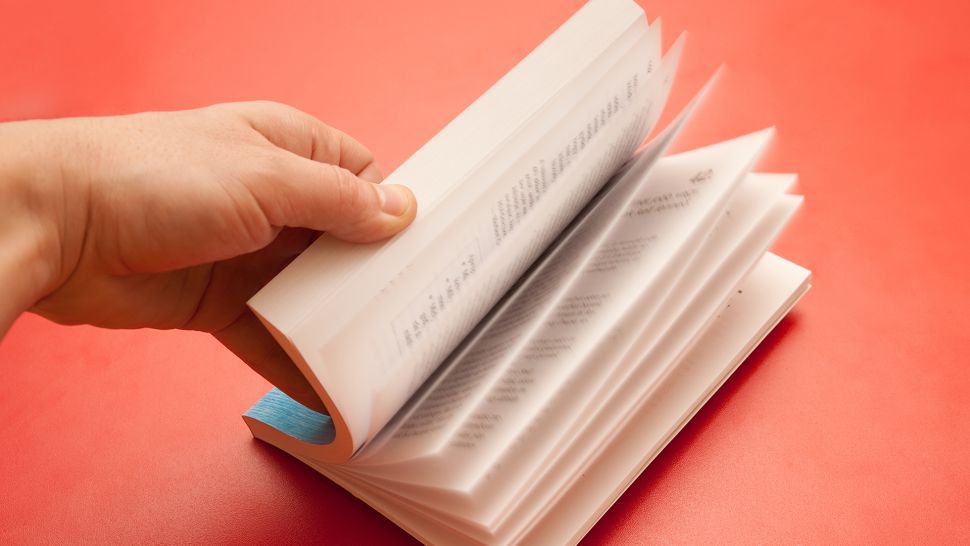 Your eyes and brain are doing a lot of work when you read. You might as well take your time and enjoy it.
(Image: © Shutterstock)

There never seems to be enough time to read these days. With so many books and articles — especially all those shared on social media (maybe even this one) — the ability to read faster could be a life-changer.

Which is why so many classes, books and apps claim they can get you to read faster — much faster. The problem is that true speed reading — a boost in reading speed by at least three times without any loss in comprehension — isn't supported by the science.

"Speed reading is not actually possible," said Elizabeth Schotter, a cognitive scientist at the University of South Florida.

Reading is a complex task that requires coordination between multiple mental systems, she explained. You have to first see the word; retrieve its meaning and any other information associated with it (such as its grammatical role in the sentence); relate the word to the rest of the sentence and its broader context; and then figure out where to point your eyes next.

Sometimes a glitch in the process requires you to go back and reread. This all happens fast: a skilled reader can read about 200 to 300 words per minute. Speeding up this process while retaining accuracy is almost impossible, she said.

"The scientific community is pretty consistent in our skepticism about speed reading," said Schotter, who wrote a recent review paper on the topic. "Someone who is claiming to help people speed read is usually making money off those claims."

Indeed, people have been selling reading classes, books and now apps ever since Evelyn Wood introduced her Reading Dynamics program in 1959, which became so popular that Presidents Kennedy, Nixon and Carter sent administration staff to take the course. Wood's technique trains people to read whole passages all at once, and other books and classes promote similar approaches, by scanning text in a zigzag pattern, for example. These methods suggest that our eyes make wasted movements when flitting back and forth over words; by streamlining where we look, we can thereby accelerate our reading.

But studies find that visual acuity concentrates on a relatively small area in the field of view, making it impossible to fully perceive and read large swaths of text at once. The limit to reading comprehension is the ability to recognize words, so adjusting eye movements probably won't help you read faster. We also need to read words in order, so a zigzag pattern would likely impair reading instead of giving it a boost. When our eyes dart back and forth, it isn't wasted motion; it's actually helping us to fully understand the text.

Other speed-reading techniques teach readers to suppress the inner voice you hear when reading, based on the assumption that this voice slows you down. But research suggests the opposite: that eliminating this voice makes it harder for you to understand what you're reading.

In recent years, numerous apps have claimed they can crank up reading speed without putting you through any training at all. These apps display text just one word at a time, one after another at a certain rate. That way, your eyes are forced to focus on the word in front of you. But again, the eyes sometimes have to go back and reread words to fully grasp text. And even though the eyes can only focus on a small region in their field of view, research has found that your eyes pick up important information beyond the word in focus — something that is simply not possible if you can only read one word at a time.

To be sure, reading speed varies a lot. Due to a variety of factors, some people just happen to be faster readers, Schotter said. They might have better working memory or are faster at processing information. But claims that people can triple their reading speed or more (e.g., reading more than 15,000 words per minute, which is equivalent to reading a college-level textbook in less than 6 minutes) are dubious. Studies have found that these speed readers don't fully grasp the material. "Most people who claim to be speed reading are actually skimming," Schotter said.

In skimming, you're hunting for certain words, passages and sentences. A good skimmer can capture the main ideas of a text pretty quickly — especially if they're already familiar with the topic — but they'll also miss out on details and nuance.

So is there a way to become a faster reader? You probably can't dramatically increase your speed, but research suggests you can get a little faster by improving your vocabulary and simply reading more. Good thing there's plenty out there to read.

This Adorable 2-Year-Old Puppy Is So Tiny, It's Hard To Believe He's Fully Grown By Andželika Jasevičiūtė If you…

BY LAURIE L. DOVE When some people think of clowns, they picture big smiles and fuzzy hair, brightly colored…