When some people think of clowns, they picture big smiles and fuzzy hair, brightly colored costumes and lots of laughs. For others? Not so much. Clowns are monstrous and mysterious to many, hiding evil intentions behind a cheerful, sometimes gruesome mask.

Clowns are downright creepy to some people. An intense and excessive fear of clowns is called coulrophobia, a condition with historical and psychological roots.

Jesters, court clowns and other silly entertainers were the predecessors of the modern-day clown. While they didn't really look or act like today's clowns, they did master basic slapstick. In particular, ye clownes of olde had the unrivaled ability to break taboos without consequence.

Fear of clowns is not something uncommon, and even goes by the name coulrophobia. 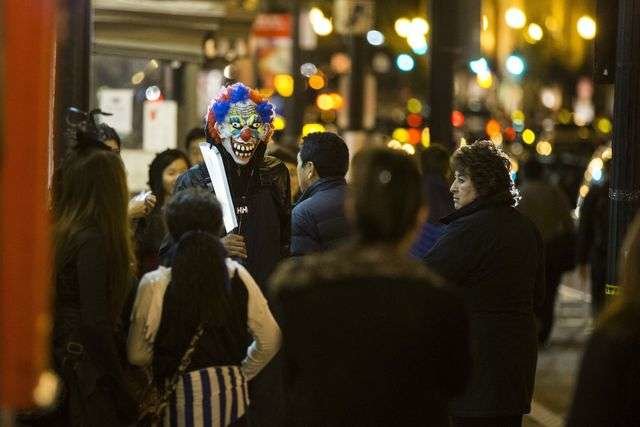 At the forefront of these entertainers who turned culture on its head were men named Joseph Grimaldi and Jean-Gaspard Deburau. But while these two clowns excelled at making people laugh, their own lives were no laughing matter. Grimaldi died a penniless alcoholic and Deburau murdered a boy in the street. The contrast between their public-facing lives and their real lives was extreme but not, it turns out, unusual. (For a pop-culture analogue, look to Sideshow Bob from "The Simpsons.")

Enter John Wayne Gacy, a professional clown turned notorious serial killer whose crimes were uncovered in the 1970s when he was apprehended. Photos of Gacy's creepy clown persona circulated widely. To top it off, Gacy was quoted as saying, "A clown can get away with anything."

Since then, Western society's perception of clowns seems to have taken a dark turn. Instead of associating clowns with funny antics, people seem to increasingly think clowns are up to no good, and that a clown's outwardly jovial appearance covers an a far more sinister side.

It's the stuff horror stories are made of — quite literally. There's Pennywise the Clown from Stephen King's bestseller "It," and Batman's nemesis The Joker. And who could forget that 1988 drive-in draw "Killer Klowns from Other Space"?

Society may have altered our perception of clowns, but author Linda Rodriguez McRobbie points to psychological consequences, too. She believes people are uncomfortable with clowns because of their painted-on and exaggerated expressions. These false expressions, she says, breed distrust.

This disconnect — something that seems familiar, yet oddly unfamiliar at the same time — was something Sigmund Freud called "uncanny" and a concept he predicted would produce intense revulsion. This "uncanny valley" is something computer animators and robot creators struggle with.

While most of us who experience this eerie terror eventually grow out of the fear of clowns, there are a few who continue to be plagued by a fear and mistrust of clowns. But don't mistake coulrophobia for an actual psychological diagnosis — it's a term that originated on the internet, with claims that it dates back to the 1980s.

There are a lot of things we can blame the '80s for — mile-high bangs, for instance — but is it really responsible for giving clowns a bad rap, too? Maybe the next decade will make clowning around fun again.

By Marcus Woo Faster isn't necessarily better (or even possible). Your eyes and brain are doing a lot of…

As our future appears increasingly dystopian, virtual reality headsets have become more popular, allowing people to immerse themselves in…