What Happens If You Don't Poop for 47 Days? 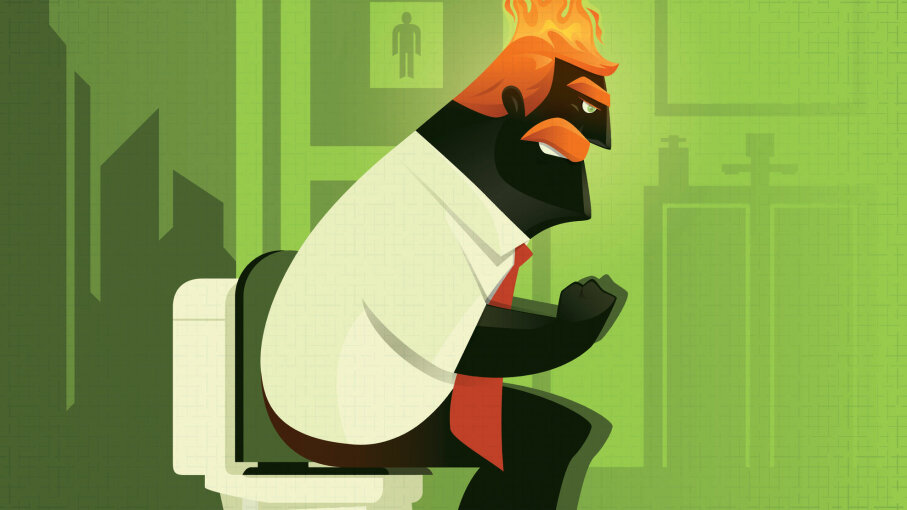 Going too long without pooping could be a "fiery" experience.
(Image: ID-WORK/GETTY IMAGES)

You've heard of concealing the evidence, but a man in England took it a step further. Lamarr Chambers refused to poop out drugs he allegedly swallowed, in a bid to avoid prosecution. To accomplish this uncomfortable feat, the prosecutor said he significantly curbed his food intake and simply didn't "go" when the urge struck (Chambers' lawyer denied this, according to the BBC). After 47 days without a bowel action, police dropped the charges, and Chambers was taken to a hospital for treatment.

News of this "pooping strike" left us wondering how big of a deal this is, in terms of impact on the human body. Turns out, it's a crappy idea.

"I would not recommend that anyone willingly subject themselves to that," says Dr. Ellen Stein, an assistant professor of medicine at Johns Hopkins University. She would know – one of her main areas of study is intestinal motility, or how poop moves through the digestive tract.

These short-term implications are harrowing enough on their own, but pale when compared to potential permanent impact. Damage to the rectum and sphincter muscles, as well as distension (swelling) in both of those organs will almost certainly cause both pain and functionality issues.

"The rectum itself is supposed to have a certain shape, and if you've got a lot of stool for a long time it can get dysfunctional because it's overloaded," Stein says. "This can cause distension of the belly wall." She adds that this is very uncomfortable and the distension can make it difficult for someone to do even basic tasks, like walking around or bending over.

It's also extremely tough for such a sensitive area to bounce back from long-term abuse, and can take months to get back in proper working order, if ever. "Muscles usually coordinate and work together. Having been out of practice, sometimes you might need physical therapy to get back into shape down there," Stein says.

Physical therapy for this issue typically involves exercises that teach the patient how to relax and tighten the pelvic muscles, thereby increasing control over bowel habits. Do enough damage, however, and all the exercises in the world might not reverse the problem. "If it's been a really long time sometimes you don't get back all of what you lost," she says.

So, what does the end of the road look like for people who've gone for months without pooping? Turns out, it's somewhat of a juxtaposition. "After a long time of withholding stool, there might be a great sense of relief. However, most patients with severe chronic constipation actually may feel worse for a while after releasing stool," she says. "The colon can get used to accommodating the stool and feel achy and uncomfortable as it contracts back towards normal size. Some folks have lost important sensory input and don't feel much different at all for several weeks until the colon begins to function more normally."

No doubt, Lamarr Chambers will know about this first-hand.

Wondering how often the average person should poop? Dr. Stein says it can run the gamut, from three times a day to three times a week. Just don't wait 47 days.

8 Signs You May Have Psychopathic Tendencies By Berit Brogaard D.M.Sci., Ph.D If these characteristics ring…