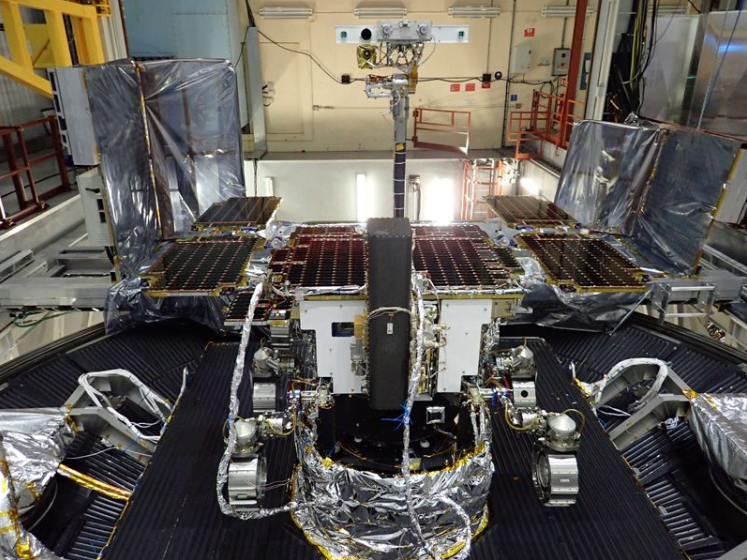 The European Space Agency (ESA) and the Russian space agency Roscosmos have delayed the launch of a rover that will search for signs of life on Mars.

The Rosalind Franklin probe will be Europe's first Mars rover and had been expected to lift off for the red planet in July, arriving at the surface in March 2021. But key tests have yet to be completed, and the mission will now depart in 2022.

"Although we are really close to launch readiness we cannot cut corners," ESA director-general Jan Wörner told reporters in a press briefing on 12 March. "We have together accepted the advice that launching this year would mean sacrificing essential remaining tests," he said. "This is a very tough decision but I'm sure it's the right one."

The mission's overall goal is to ascertain whether Mars has ever hosted life — looking for chemicals that might be indicative of biological activity. The reasons for the delay include software problems with the spacecraft that will carry the rover, and the main parachute to be used during the landing has yet to be successfully tested. The space agencies also cited the global coronavirus pandemic as a reason.

The epidemiological situation in Europe has "left our experts practically no possibility to proceed with travels to partner industries", said Dmitry Rogozin, director-general of Roscosmos, in a statement.

The rover is the second part of the two space agencies' broader ExoMars mission, and its launch has already been delayed once — from 2018 to 2020. The first part of the mission, the Trace Gas Orbiter spacecraft, launched successfully in 2016 and is taking measurements that are painting a detailed picture of the Martian atmosphere.

August and October 2022 — the next time that Earth and Mars align to allow a launch between the two planets, which happens every 26 months. It would land between April and July 2023. The details of the mission, including its landing site, instrument suite and goals, remain the same.

"There would be no intention to change the instrument suite," said David Parker, ESA's director of human and robotic exploration, in the press briefing. "The rover is complete."

This includes a Russian-built landing platform called Kazachok, designed to carry the rover to the surface, which has experienced problems. A prototype of the lander, called Schiaparelli, crashed on the surface of Mars in 2016.

Rosalind Franklin is one of several missions designed to probe the past and present habitability of Mars, and one of four spacecraft originally set to launch during the launch window this July. The United States, China and the United Arab Emirates also hope to send craft to the red planet.

NASA will launch its Perseverance rover, which will collect samples on the surface to be returned to Earth. This follows its ongoing Curiosity mission, which has found evidence of ancient water on the Martian surface.

The ExoMars rover is unique, however, in that it has a drill that can burrow up to two metres below the surface of Mars to examine more pristine subsurface material.

"Any time a mission gets pushed back it's disappointing," says Paul Byrne, a planetary scientist at North Carolina State University in Raleigh. "But I think given the reasons for it it's the right call. Better a delay than a potentially destroyed rover."

How to Use Color in Small Rooms Written by Diana Hathaway Timmons When you are decorating a small room,…

Who Has More Favorable Views of Their Former Partners? By Paul Van Lange Ph.D. Who has more favorable…