1 IN 4 Americans have either lost their job or had pay cut from coronavirus shutdowns: Survey 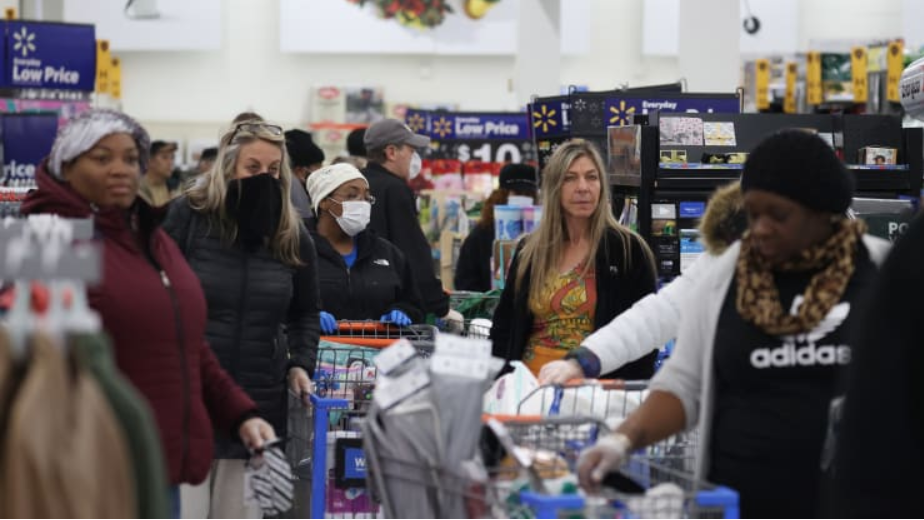 People wearing masks and gloves wait to checkout at Walmart on April 03, 2020 in Uniondale, New York.

A quarter of Americans have either lost their job or seen their wages cut as a result of the coronavirus shutdown, according to the CNBC All-America Economic Survey, which registered the biggest and fastest decline ever in the public’s view of the economy.

At the same time, it found that a majority of Americans remains optimistic that the economy will bounce back in the next year, and President Donald Trump’s approval rating has improved.

The poll of 800 Americans across the nation, conducted Friday through Monday, found 10% saying they have lost their job and 16% reporting they have seen their wages or salary reduced due to the economic shutdown that has accompanied the spread of the virus. 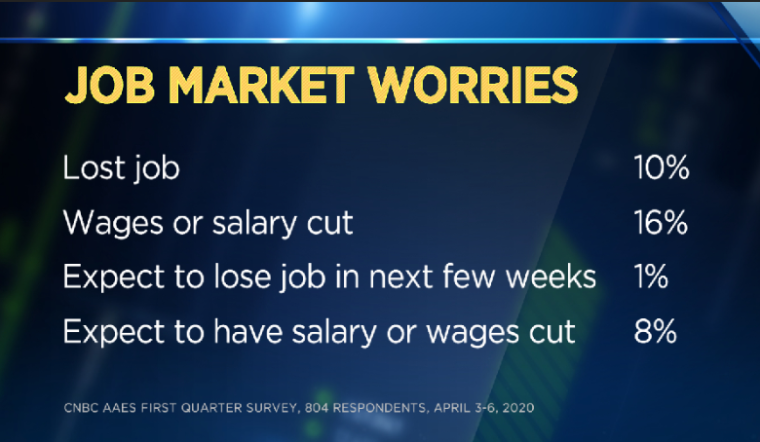 Nine percent believe unemployment or a pay cut await them. The poll has a margin of error of 3.5 percentage points.

The percentage of Americans saying the economy is now good or excellent fell to just 22%, giving up the gains of the Trump presidency, and falling further than it ever did after the Sept. 11, 2001, terrorist attacks or the Great Recession in 2008.

“There are no words for it,” said Micah Roberts, partner with Public Opinion Strategies, the Republican pollster for the CNBC survey. “There is no precedents for confidence in the economy dropping this far this quickly.”

There was also an unprecedented decline in Americans’ views of their home values. Just 24% now believe their home value will increase in the next year, down 26 percentage points from the December survey.

The decline in attitudes about the economy, however, came with a record surge in optimism: 51% said the economy will improve in the next year. Every demographic group registered large gains in optimism, Democrats and Republicans, old and young and rich and poor.

“People have shifted their optimism,” Roberts said. “It’s not lost. It’s just relocated to the future.”

Behind that optimism could be the general belief that the economic shutdown will be relatively short-lived. Forty-nine percent said the economy will return to normal “in the next few months,” with 26% responding “in the next year.” Just 6% believe the effects of the shutdown will endure longer than a year.

Trump’s job rating rose in the poll, with more Americans approving of his handling of the presidency than disapproving for the first time in the three years it’s been tracked by CNBC. His approval rating jumped to 46% from 40% in December, with a 6-point decline in disapproval to 43%. 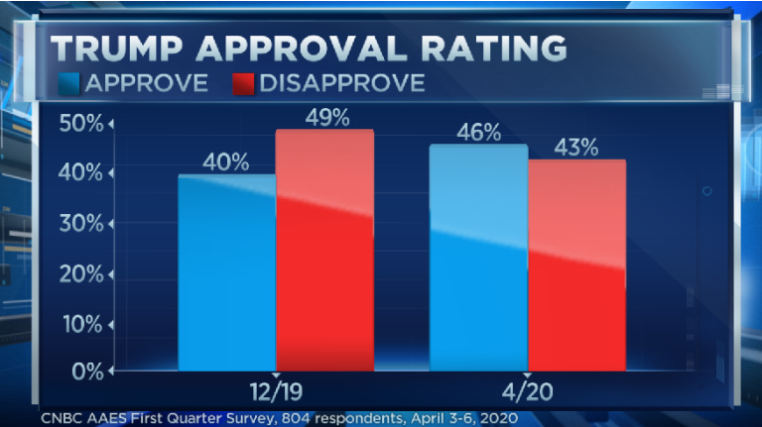 Jay Campbell, a partner with Hart Research, the Democratic pollster for the survey, noted that a record 20% of Democrats approve of the job Trump is doing, up from 8% in December. “The hardest hit on the economy are rallying the most around the president in relative terms,” Campbell said.

He also said the political question is whether that lasts through November. The survey found Democrat Joe Biden leading Trump by 44% to 39% in a head-to-head race.

The Center for Disease Control and Prevention gets the highest marks for its handling of the coronavirus outbreak, with 75% approving. The public gives the Federal Reserve’s response a 57% approval and Trump and Republicans and Democrats in Congress all with about a 50% approval rating for their virus response.

The poll found 67% approving of Congress’ $2 trillion CARES relief bill, with 8% disapproving and 25% unsure. Americans said it’s a high priority to give aid to hospitals, small businesses and retailers, but less of a priority to help oil companies, airlines, Boeing, cruise lines and casinos.

Views on the stock market have also deteriorated. With equities 23% off their high, 41% believe now is a good time to invest in stocks, down 8 points from the December survey. Forty-five percent said it’s a bad time to invest, up 20 percentage points. A 47% plurality of those polled expected their portfolio to be higher in the next year, with 25% believing it will decrease and 22% saying it will be the same.

Bill Gates: Schools will reopen in the fall, but economy won't magically return to the way it was By…

The greatest designs of modern times BY DANIEL BENTLEY What does it take to become a design icon? There‘…