The novel coronavirus (2019-nCoV) from Wuhan is currently causing concern in the medical community as the virus is spreading around the world.1 Since its identification in late December 2019, the number of cases from China that have been imported into other countries is on the rise, and the epidemiologic picture is changing on a daily basis. We are reporting a case of 2019-nCoV infection acquired outside of Asia in which transmission appears to have occurred during the incubation period in the index patient.

A 33-year-old otherwise healthy German businessman (Patient 1) became ill with a sore throat, chills, and myalgias on January 24, 2020. The following day, a fever of 39.1°C (102.4°F) developed, along with a productive cough. By the evening of the next day, he started feeling better and went back to work on January 27.

Before the onset of symptoms, he had attended meetings with a Chinese business partner at his company near Munich on January 20 and 21. The business partner, a Shanghai resident, had visited Germany between Jan. 19 and 22. During her stay, she had been well with no signs or symptoms of infection but had become ill on her flight back to China, where she tested positive for 2019-nCoV on January 26 (index patient in Figure 1). 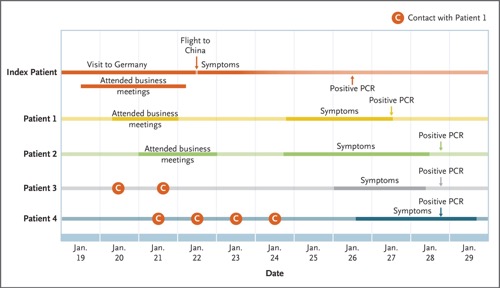 Figure 1. Timeline of Exposure to Index Patient with Asymptomatic 2019-CoV Infection in Germany.

On January 27, she informed the company about her illness. Contact tracing was started, and the above-mentioned colleague was sent to the Division of Infectious Diseases and Tropical Medicine in Munich for further assessment. At presentation, he was afebrile and well. He reported no previous or chronic illnesses and had no history of foreign travel within 14 days before the onset of symptoms. Two nasopharyngeal swabs and one sputum sample were obtained and were found to be positive for 2019-nCoV on quantitative reverse-transcriptase–polymerase-chain-reaction (qRT-PCR) assay.2 Follow-up qRT-PCR assay revealed a high viral load of 108 copies per milliliter in his sputum during the following days, with the last available result on January 29.

On January 28, three additional employees at the company tested positive for 2019-nCoV (Patients 2 through 4 in Figure 1). Of these patients, only Patient 2 had contact with the index patient; the other two patients had contact only with Patient 1. In accordance with the health authorities, all the patients with confirmed 2019-nCoV infection were admitted to a Munich infectious diseases unit for clinical monitoring and isolation. So far, none of the four confirmed patients show signs of severe clinical illness.

This case of 2019-nCoV infection was diagnosed in Germany and transmitted outside of Asia. However, it is notable that the infection appears to have been transmitted during the incubation period of the index patient, in whom the illness was brief and nonspecific.3

The fact that asymptomatic persons are potential sources of 2019-nCoV infection may warrant a reassessment of transmission dynamics of the current outbreak. In this context, the detection of 2019-nCoV and a high sputum viral load in a convalescent patient (Patient 1) arouse concern about prolonged shedding of 2019-nCoV after recovery. Yet, the viability of 2019-nCoV detected on qRT-PCR in this patient remains to be proved by means of viral culture.

Despite these concerns, all four patients who were seen in Munich have had mild cases and were hospitalized primarily for public health purposes. Since hospital capacities are limited — in particular, given the concurrent peak of the influenza season in the northern hemisphere — research is needed to determine whether such patients can be treated with appropriate guidance and oversight outside the hospital.