Covid-19: What we can learn from wartime efforts

Language more normally suited to wartime is commonly invoked around the Covid-19 pandemic, but can we learn anything from past conflicts in our battle against coronavirus?

In January 1941, Winston Churchill gave a sombre address to the House of Commons, the UK’s parliament. “Our Empire and indeed the whole English-speaking world are passing through a dark and deadly valley,” he remarked in one of World War Two’s bleakest periods. “But I should be failing in my duty if, on the other wise, I were not to convey the true impression, that a great nation is getting into its war stride.”

Comparisons between World War Two and the current coronavirus pandemic are prolific. New York Governor Andrew Cuomo, who has been compared to a wartime president, has peppered his daily briefings with combative language, describing the apex of the disease’s curve as “the next battle at the top of the mountain”, and proclaiming “ventilators are to this war what bombs were to World War Two”.

European leaders, meanwhile, talk of an inevitable “D-Day” when the outbreak will overwhelm the hospital system, and allude to war with an invisible enemy. Healthcare workers are on the frontlines, scientists are the new generals, economists draw up battle plans, politicians call for mobilisation. Just a few weeks ago, Queen Elizabeth II urged Britons to adopt the same discipline and resolve that the people had showed during WWII. “It reminds me of the very first broadcast I made in 1940, helped by my sister,” the monarch recalled during a rare televised address.

The coronavirus pandemic, though different from the war in many crucial respects, seems to demand some of the same measures used during that global emergency. From boosted production to rapid redeployment of resources, increased governmental oversight and stimulus plans to potential rationing, 2020’s battle against a virus might force great nations to once again adopt their war strides.

Are there lessons we can learn from the collective anxiety, the contingency measures, the calls for national cohesion and the dramatic changes to society that defined WWII? Is there is a fallacy in the modern conception of the immediate “united front” – a fallacy that will continue to play out against the backdrop of the pandemic? What does shared sacrifice look like, and how will it shape our future this time around? 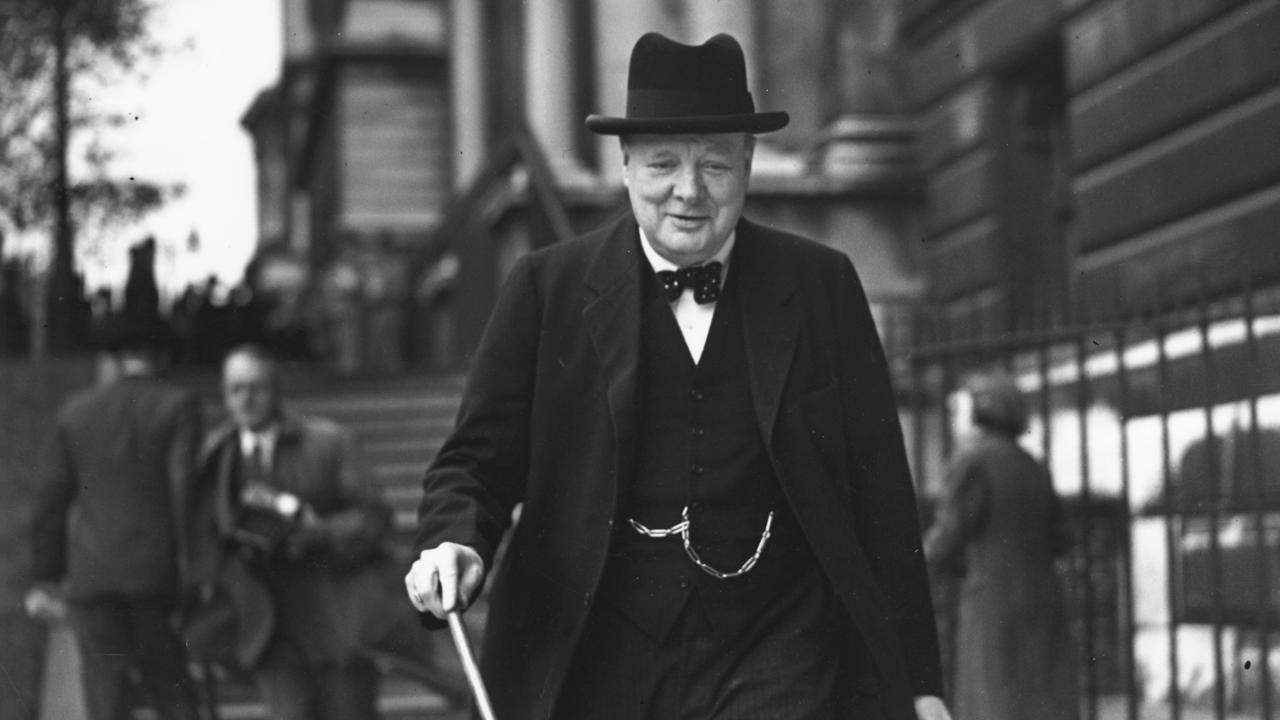 The spirit of Britain's wartime leader Winston Churchill is often invoked by those urging the adoption of measures against coronavirus (Credit: Getty Images)

The extent to which wartime psychology is relevant to our understanding of the coronavirus pandemic is, like the trajectory of the disease itself, unclear and rapidly evolving. When politicians (or journalists) reach for convenient parallels between the pandemic and those wartime battles, they may make dangerous assumptions. Comparisons that rely on militarisation, organised violence or the threat of civilian control aren’t useful, and can even be harmful, especially as new information becomes available and data changes by the hour.

“If we mount a war on coronavirus, that doesn’t solve fundamental problems in the healthcare system or in global trade, for example,” says Mark R Wilson, professor of history at the University of North Carolina. “We constrain our imagination by thinking about a short-run war mobilisation.” Insidious global problems such as equipment shortages, health care disparities, lack of emergency protocols, confusion between federal and local policies, poverty and societal inequity can’t be neatly addressed by a rapid offensive against Covid-19, even if that battle is metaphoric. “There is no automatic formula for what happens during and after a crisis,” Wilson adds. “But right now, people can and should still take an interest in the past.”

Neurosurgeons, cardiologists, medical students– all have been pulled into emergency rooms and intensive care wards

During World War Two, a dire need to radically accelerate the output of items such as ships, tanks and bombers led to a mobilised wartime economy. The United States and Great Britain, in particular, converted existing factories that once made civilian products into those that could produce military equipment. Car manufacturers built army trucks instead; clock companies and plumbing industrialists designed ammunition cartridges; silk stockings were repurposed for parachutes.

Over the past month we’ve once again seen this phenomenon of conversion, as companies across the globe repurpose production lines in an effort to turn the tide of the outbreak. In just 72 hours, luxury brand Louis Vuitton began manufacturing hand sanitiser with alcohol normally used in its perfume distillery, which it then distributed to hospitals across France. General Motors, the US auto manufacturer that mass-produced tanks in World War Two, has pivoted once again, this time producing thousands of ventilators, while clothing retailers in the UK have turned from fashion to manufacturing in-demand surgical N-95 masks. 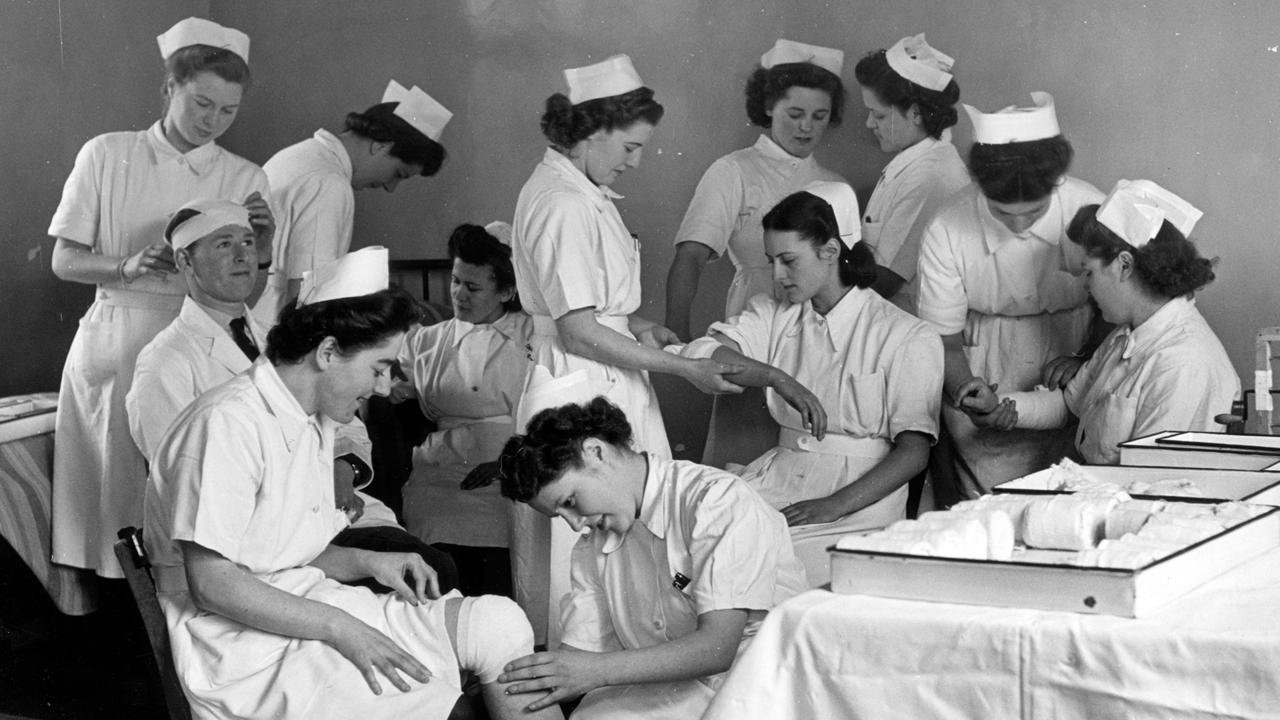 The war also spurred massive social changes, such as the development of universal health care in countries including the UK (Credit: Getty Images)

Airlines across the globe have begun chartered flights to repatriate stranded nationals abroad and transport health care workers and medical supplies to deeply impacted regions. Hospital ships such as the USNS Comfort, designed to treat casualties of war, now offer a relief valve for hospitals overwhelmed with Covid-19 patients.

This redeployment calculus applies not just to goods and services but to human capital as well. Neurosurgeons, cardiologists, medical student – all have been pulled into emergency rooms and intensive care wards. Receptionists who normally deal with billing are suddenly tasked with screening coronavirus patients, making up for an acute shortage of personnel. Restaurant workers prepare and deliver meals in bulk to exhausted emergency care nurses, parents have become full-time teachers to their children, hotel managers are being trained in hospital protocol as they open their doors to health care workers.

During World War Two, the measures used to ramp up production took months to implement; today, it would appear that we had not months, but weeks. And our current efforts seem patchwork at best. World War Two’s unprecedented mobilisation effort, by contrast – its dramatic output, profit control and federal regulation – might serve as a blueprint during the next phase of the coronavirus outbreak. As they did during the war, officials could opt to fund brand new factories and equip them with machinery and tools (in this case, ventilators or personal protective gear).

接上篇：我们为什么把流行病视为一场战争？（上） The short-term financial cost of these measures would be enormous, but the payoff could be too…

Your IQ Matters Less Than You Think BY DEAN KEITH SIMONTON In studies of children and historical figures, IQ…