What we actually learn from celebrities may surprise you. 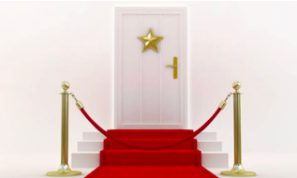 A few years ago, Britney Spears and her entourage swept through my boss's office. As she sashayed past, I blushed and stammered and leaned over my desk to shake her hand. She looked right into my eyes and smiled her pageant smile, and I confess, I felt dizzy. I immediately rang up friends to report my celebrity encounter, saying: "She had on a gorgeous, floor-length white fur coat! Her skin was blotchy!"

Celebrities are fascinating because they live in a parallel universe—one that looks and feels just like ours yet is light-years beyond our reach. Stars cry to Diane Sawyer about their problems—failed marriages, hardscrabble upbringings, bad career decisions—and we can relate. The paparazzi catch them in wet hair and a stained T-shirt, and we're thrilled. They're ordinary folks, just like us. And yet…

Stars live in another world entirely, one that makes our lives seem woefully dull by comparison. The teary chat with Diane quickly turns to the subject of a recent $10 million film fee and honorary United Nations ambassadorship. The magazines that specialize in gotcha snapshots of schleppy-looking celebs also feature Cameron Diaz wrapped in a $15,000 couture gown and glowing with youth, money and star power. We're left hanging—and we want more.

It's easy to blame the media for this cognitive whiplash. But the real celebrity spinmeister is our own mind, which tricks us into believing the stars are our lovers and our social intimates. Celebrity culture plays to all of our innate tendencies: We're built to view anyone we recognize as an acquaintance ripe for gossip or for romance, hence our powerful interest in Anna Kournikova's sex life. Since catching sight of a beautiful face bathes the brain in pleasing chemicals, George Clooney's killer smile is impossible to ignore. But when celebrities are both our intimate daily companions and as distant as the heavens above, it's hard to know just how to think of them.

Celebrities tap into powerful motivational systems designed to foster romantic love and to urge us to find a mate. Stars summon our most human yearnings: to love, admire, copy and, of course, to gossip and to jeer. It's only natural that we get pulled into their gravitational field.

John Lennon infuriated the faithful when he said the Beatles were more popular than Jesus, but he wasn't the first to suggest that celebrity culture was taking the place of religion. With its myths, its rituals (the red carpet walk, the Super Bowl ring, the handprints outside Grauman's Chinese Theater) and its ability to immortalize, it fills a similar cultural niche. In a secular society our need for ritualized idol worship can be displaced onto stars, speculates psychologist James Houran, formerly of the Southern Illinois University School of Medicine and now director of psychological studies for True Beginnings dating service. Nonreligious people tend to be more interested in celebrity culture, he's found, and Houran speculates that for them, celebrity fills some of the same roles the church fills for believers, like the desire to admire the powerful and the drive to fit into a community of people with shared values.

Much like spiritual guidance, celebrity-watching can be inspiring, or at least help us muster the will to tackle our own problems. "Celebrities motivate us to make it," says Helen Fisher, an anthropologist at Rutgers University in New Jersey. Oprah Winfrey suffered through poverty, sexual abuse and racial discrimination to become the wealthiest woman in media. Lance Armstrong survived advanced testicular cancer and went on to win the Tour de France five times. Star-watching can also simply point the way to a grander, more dramatic way of living, publicist Levine says. "We live lives more dedicated to safety or quiet desperation, and we transcend this by connecting with bigger lives—those of the stars," he says. "We're afraid to eat that fatty muffin, but Ozzy Osborne isn't."

The brain simply doesn't realize that it's being fooled by TV and movies, says sociologist Satoshi Kanazawa, lecturer at the London School of Economics. "Hundreds of thousands of years ago, it was impossible for someone not to know you if you knew them. And if they didn't kill you, they were probably your friend." Kanazawa's research has shown that this feeling of friendship has other repercussions: People who watch more TV are more satisfied with their friendships, just as if they had more friends and socialized more frequently. Another study found that teens who keep up to date on celebrity gossip are popular, with strong social networks—the interest in pop culture indicates a healthy drive for independence from parents.

The penchant for gossiping about the stars also plays into our species' obsession with status. Humans naturally copy techniques from high-status individuals, says Francisco Gil-White, professor of psychology at University of Pennsylvania. It's an attempt to get the same rewards, whether that's "attention, favors, gifts, [or] laudatory exclamations." Stars get all kinds of perks and pampering: Sarah Jessica Parker was allowed to keep each of her Sex and the City character's extravagant getups; Halle Berry borrowed a $3 million diamond ring to wear to the Oscars. Understandably, we look to get in on the game.

The impulse to copy is behind the popularity of celebrity magazines, says Fuller. Regular women can see what the stars are wearing, often with tips on how to buy cheap knockoffs of their outfits. Taken to extremes—which television is only too happy to do—the urge to copy produces spectacles like the MTV reality show I Want a Famous Face. By dint of extensive plastic surgery, ordinary people are made to look more like their famous heroes. In one episode, two gangly 20-year-old twin brothers are molded into Brad Pitt look-alikes. The brothers want to be stars, and they've decided that looking more like Pitt is the fastest road to fame.

The beauty bias is well-known. We all pay more attention to good-looking people. Kenrick's eye-tracking research has shown that both men and women spend more time looking at beautiful women than at less attractive women. Babies as young as 8-months-old will stare at an attractive female face of any race longer than they will at an average-looking or unattractive female face. Certain human traits are universally recognized as beautiful: symmetry, regularity in the shape and size of the features, smooth skin, big eyes and thick lips, and an hourglass figure that indicates fertility. Men interpret these features as evidence of health and reproductive fitness. Women's responses are more complex, says psychologist and Harvard Medical School instructor Nancy Etcoff, author of Survival of the Prettiest. Women stare at beautiful female faces out of aesthetic appreciation, to look for potential tips—and because a beautiful woman could be a rival worth monitoring.

It's not surprising that gorgeous people wind up famous. What's less obvious is that famous people often wind up gorgeous: The more we see a certain face, the more our brain likes it, whether or not it's actually beautiful.

Just as in pageants, personality plays a part in the beauty contest, too. State University of New York at Binghamton psychology professors Kevin Kniffin and David Sloan Wilson have found that people's perceptions of physical appeal are strongly influenced by familiarity and likability. "Almost all of the beauty research is based on subjects looking at strangers in photos or computer-generated images—but we don't live in a world of strangers!" Kniffin points out.

What's the result of our simultaneous yearning to be more like celebrities and our desire to be wowed by their unattainable perfection? We've been watching it for the past decade. Reality television is an express train to fame, unpredictably turning nobodies into somebodies. Reality TV now gives us the ability to get inside the star factory and watch the transition to fame in real time.

"The appeal of reality stars is that they were possibly once just like you, sitting on the couch watching a reality TV program, until they leaped to celebrity," says Andy Denhart, blogger and reality TV junkie. "With the number of reality shows out there, it's inexcusable to not be famous if you want to be!" In the past, ambitious young men who idolized a famous actor might take acting lessons or learn to dance. Now, they get plastic surgery and learn to tell their life stories for the camera. In fact, says editor Fuller, the newly minted stars of reality TV are better at the celebrity game than many of the movie and television stars: "They are more accessible, more cooperative. They enjoy publicity. They will open up and offer insight, often more than a 'traditional' celeb, because they want the attention, whereas an actress might have ambivalent feelings about fame and how it is tied in with her 'craft.'

Yet there's still something about that magic dust. A celebrity sighting is not just about seeing a star, author Braudy points out, but is about being seen by a star: "There is a sense that celebrities are more real than we are; people feel more real in the presence of a celebrity." It wasn't just that I saw Britney, it was that Britney saw me.