BY LAURIE L. DOVE
If you were watching a cooking show on TV and saw a chef accidentally draw blood on her finger with a knife, would that make you squeamish? What about if the same thing happened in real life?

An estimated 15 percent of people faint at the sight of blood and, for up to 4 percent of people, blood injuries escalate to a full-on phobia. What's really interesting is that there are many people who don't feel faint when they cut themselves, but still pass out cold when they see themselves bleeding. 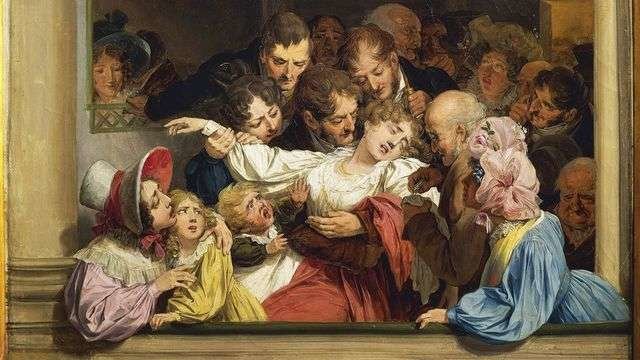 While it's completely normal for blood pressure to rise in times of real or perceived danger as part of the sympathetic nervous system's "fight or flight" response, problems with consciousness arise as blood pressure spikes reverse themselves. And the root source is the vagus nerve, which connects the a region of the brain called the nucleus of the solitary tract (NST) to areas of the body associated with involuntary movement, like breathing, swallowing and heart function.

The NST acts like an internal toggle switch that flips between fight or flight responses and the intensely calming responses that set in afterward. One explanation is that as the NST toggles from the sympathetic response that readies you for action and the ensuing parasympathetic response that settles the turbulence, communication to the vagus nerve becomes confused and tries to do both at the same time — decreasing blood pressure while increasing your heart rate. As a result, blood is pumped away from the brain, causing a loss of consciousness.

Another possibility is that rather than trying to do both at once, the brain's NST toggles too quickly between the sympathetic and parasympathetic responses, and makes the body temporarily shut down by blacking out. Researchers also believe that because the NST is also in charge of the disgust response, the mixture of fear and disgust gets convoluted and causes fainting. But why all the confusion? Could it possibility be a survival aid?

It's difficult to imagine a scenario in which our ancestors repeatedly fell over unconscious at the sight of their own blood and still managed to avoid predators. Unlikely as it may seem that the homo sapiens family tree grew more branches with all this fainting, researchers think that passing out may have been a survival tool then — and now. For instance, let's say you're being attacked by a bear and faint at the sight of your own blood. This might, one could hope, lead the bear to lose interest and leave you alone, bruised and bloodied but still living. (Fainting goats, anyone?)

Perhaps a more plausible theory is that when people see their own blood and experience a sudden decrease in blood pressure that leads to fainting, the protective response prevents us from bleeding out.

That's because regardless of why you faint, the change to a horizontal position helps the heart restore blood to the brain. And hopefully by the time you come around, the bleeding has subsided.

By Spooky on March 8th, 2019 A Japanese tech startup claims to have developed an artificial intelligence software that…