By Spooky on March 8th, 2019
A Japanese tech startup claims to have developed an artificial intelligence software that analyzes surveillance camera footage in order to detect suspicious behavior and prevent shoplifting before it actually happens.

In 2002, when the movie Minority Report, starring Tom Cruise, came out, the concept of preventing a future crime before the perpetrator did anything remotely suspicious was nothing more than a cool sci-fi idea, but thanks to the rapid advancement of artifical intelligence, we already have an early version of the technology displayed in that movie. VaakEye, an AI software developed by Japanese startup Vaak, can allegedly detect shoplifting before it occurs by analyzing surveillance camera footage for discrete suspicious movements and behaviors of people caught in the camera’s field of view. If the algorithm decides that there is a high-enough probability of a person shoplifting, it sends an alert via a smartphone app so the crime can be prevented. 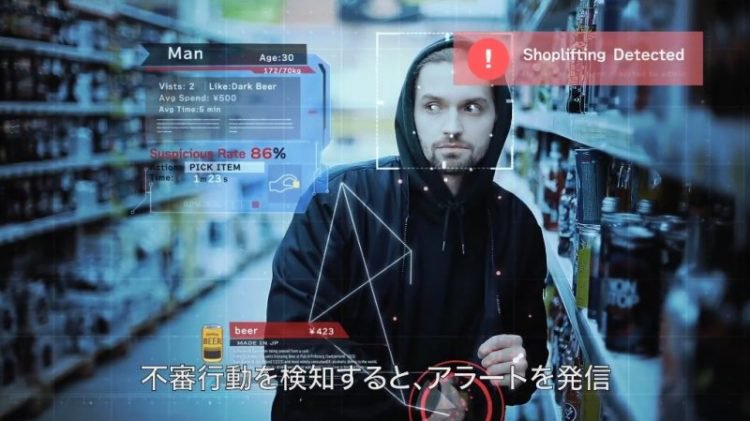 VaakEye first made news headlines back in December 2018 when it picked up on previously undetected shoplifting activity at a convenience store in Yokohama. The suspect, an 80-year-old man, was apprehended a few days later after stealing a hat. Today, Vaak is currently testing its software in a few dozen stores in the Tokyo area, but plans to have it installed in 100,000 stores across Japan in the next three years.

“I thought then, ‘Ah, at last!” Vaak founder Ryo Tanaka recalled about the first time VaakEye helped detect shoplifting intentions. “We took an important step closer to a society where crime can be prevented with AI.”

VaakEye is based on a complex algorithm that harnesses deep learning from more than 100,000 hours of surveillance footage and analyzes over 100 different factors, from a person’s face, clothes, movement, overall behavior, to macro-data like crime incidence in the area the shop is located in, or current weather conditions.

This new shoplifting-prevention software has reportedly helped detect at least 7 shoplifters in tests performed as of December 12th last year, and is credited with reducing shoplifting cases by 75%, according to IT Media. However, VaakEye is not intended to help police catch shoplifters after they’ve committed the crime, but rather help business owners prevent the crime from being committed. Theoretically, shop staff can approach suspicious subjects after receiving an alert from the software and ask if they need some help. This should discourage suspected shoplifters from going ahead with their plans.

While Vaak is currently focusing on shoplifting prevention, they also have plans to enhance the software’s functionality. 30-year-old Tanaka told Bloomberg that it could also be used to analyze the way consumers interact with various products, thus helping businesses better display their goods, and also in public spaces and train platforms to detect suspicious behavior and prevent suicide attempts.

“We’re still just discovering all the market potential,” Tanaka said. “We want to keep expanding the scope of the company.”

By Spooky on June 12th, 2019 A computer programmer in China caused quite a stir on social media recently…

BY LAURIE L. DOVE If you were watching a cooking show on TV and saw a chef accidentally draw…