Why Do Mosquitoes Bite Some People More Than Others? 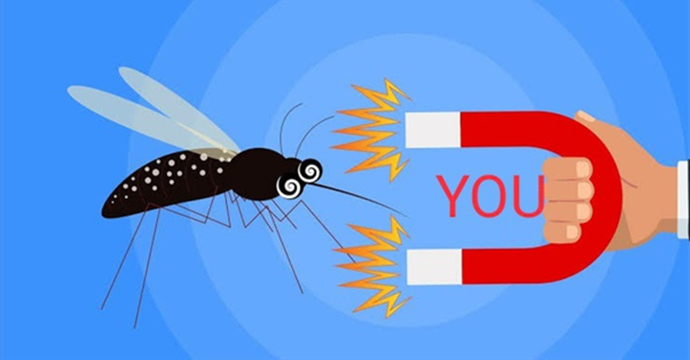 You come in from a summer hike covered with itchy red mosquito bites, only to have your friends innocently proclaim that they don’t have any. Or you wake up from a night of camping to find your ankles and wrists aflame with bites, while your tentmates are unscathed.

You’re not alone. An estimated 20 percent of people, it turns out, are especially delicious for mosquitoes, and get bit more often on a consistent basis. And while scientists don’t yet have a cure for the ailment, they do have a number of ideas regarding why some of us are more prone to bites than others. Here are some of the factors that could play a role:

One study found that in a controlled setting, mosquitoes landed on people with Type O blood nearly twice as often as those with Type A. People with Type B blood fell somewhere in the middle of this itchy spectrum. Additionally, based on other genes, about 85 percent of people secrete a chemical signal through their skin that indicates which blood type they have, while 15 percent do not, and mosquitoes are also more attracted to secretors than nonsecretors regardless of which type they are.

One of the key ways mosquitoes locate their targets is by smelling the carbon dioxide emitted in their breath. As a result, people who simply exhale more of the gas over time—generally, larger people—have been shown to attract more mosquitoes than others. This is one of the reasons why children get bit less often than adults, on the whole.

In addition to carbon dioxide, mosquitoes find victims at closer range by smelling the lactic acid, uric acid, ammonia and other substances expelled via their sweat, and are also attracted to people with higher body temperatures. Because strenuous exercise increases the buildup of lactic acid and heat in your body, it likely makes you stand out to the insects.

In a 2011 study, scientists found that having large amounts of a few types of bacteria made skin more appealing to mosquitoes. This also might be why mosquitoes are especially prone to biting our ankles and feet—they naturally have more robust bacteria colonies.

Just a single 12-ounce bottle of beer can make you more attractive to the insects, one study found.

Pregnant women have been found to attract roughly twice as many mosquito bites as others.

Mosquitoes use vision (along with scent) to locate humans, so wearing colors that stand out (black, dark blue or red) may make you easier to find.

As a whole, underlying genetic factors are estimated to account for 85 percent of the variability between people in their attractiveness to mosquitoes—regardless of whether it’s expressed through blood type, metabolism, or other factors.

Some researchers have started looking at the reasons why a minority of people seem to rarely attract mosquitoes in the hopes of creating the next generation of insect repellants. Scientists have found that these natural repellers tend to excrete a handful of substances that mosquitoes don’t seem to find appealing. Eventually, incorporating these molecules into advanced bug spray could make it possible for even a Type O, exercising, pregnant woman in a black shirt to ward off mosquitoes for good.

From 【哈佛商学院刊物】 We often hear that exceptional achievers tend to sleep very little. But for all the heroic showing-off…