By All About History 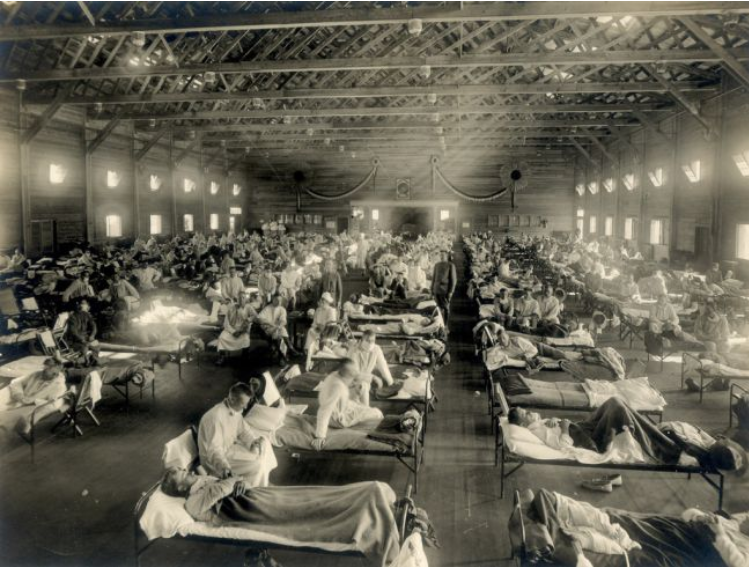 In 1918, a strain of influenza known as Spanish flu caused a global pandemic, spreading rapidly and killing indiscriminately. Young, old, sick and otherwise-healthy people all became infected, and at least 10% of patients died.

Estimates vary on the exact number of deaths caused by the disease, but it is thought to have infected a third of the world's population and killed at least 50 million people, making it the deadliest pandemic in modern history. Although at the time it gained the nickname "Spanish flu," it's unlikely that the virus originated in Spain.

What caused the Spanish flu?

The outbreak began in 1918, during the final months of World War I, and historians now believe that the conflict may have been partly responsible for spreading the virus. On the Western Front, soldiers living in cramped, dirty and damp conditions became ill. This was a direct result of weakened immune systems from malnourishment. Their illnesses, which were known as "la grippe," were infectious, and spread among the ranks. Within around three days of becoming ill, many soldiers would start to feel better, but not all would make it.

During the summer of 1918, as troops began to return home on leave, they brought with them the undetected virus that had made them ill. The virus spread across cities, towns and villages in the soldiers' home countries. Many of those infected, both soldiers and civilians, did not recover rapidly. The virus was hardest on young adults between the ages of 20 and 30 who had previously been healthy.

In 2014, a new theory about the origins of the virus suggested that it first emerged in China, National Geographic reported. Previously undiscovered records linked the flu to the transportation of Chinese laborers, the Chinese Labour Corps, across Canada in 1917 and 1918. The laborers were mostly farm workers from remote parts of rural China, according to Mark Humphries' book "The Last Plague" (University of Toronto Press, 2013). They spent six days in sealed train containers as they were transported across the country before continuing to France. There, they were required to dig trenches, unload trains, lay tracks, build roads and repair damaged tanks. In all, over 90,000 workers were mobilized to the Western Front.

Humphries explains that in one count of 25,000 Chinese laborers in 1918, some 3,000 ended their Canadian journey in medical quarantine. At the time, because of racial stereotypes, their illness was blamed on "Chinese laziness" and Canadian doctors did not take the workers' symptoms seriously. By the time the laborers arrived in northern France in early 1918, many were sick, and hundreds were soon dying. 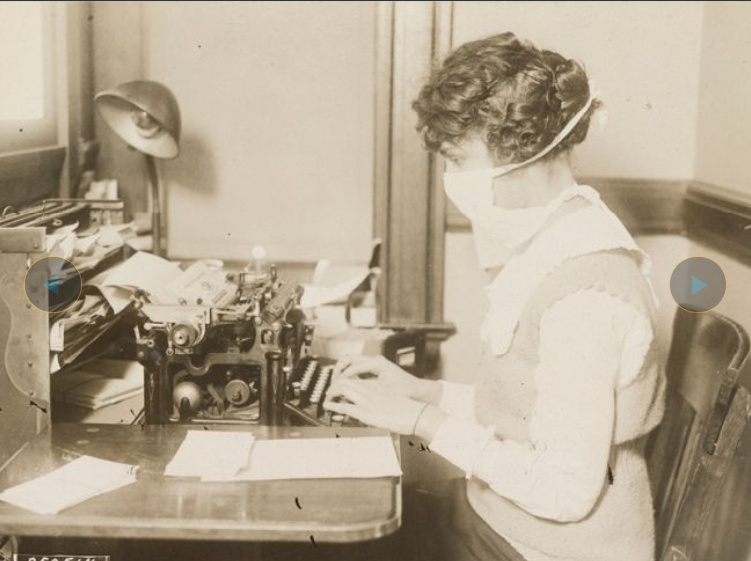 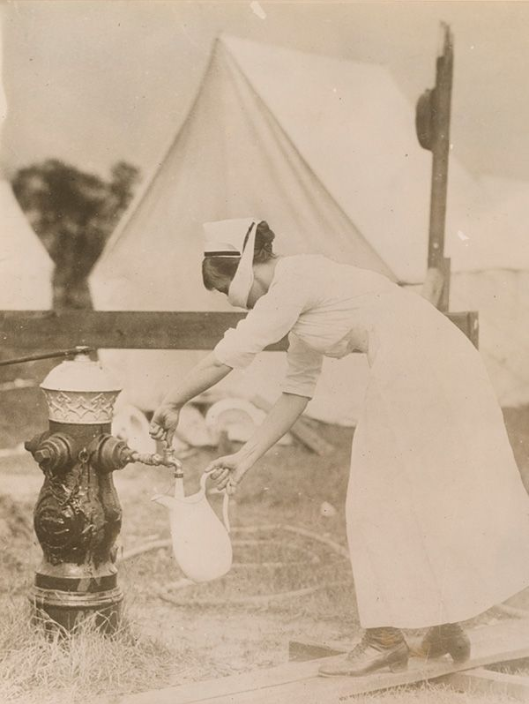 Why was it called the Spanish flu?

Spain was one of the earliest countries where the epidemic was identified, but historians believe this was likely a result of wartime censorship. Spain was a neutral nation during the war and did not enforce strict censorship of its press, which could therefore freely publish early accounts of the illness. As a result, people falsely believed the illness was specific to Spain, and the name "Spanish flu" stuck.

Even in late Spring 1918, a Spanish news service sent word to Reuters' London office informing the news agency that "a strange form of disease of epidemic character has appeared in Madrid. The epidemic is of a mild nature, no deaths having been reported," according to Henry Davies' book "The Spanish Flu," (Henry Holt & Co., 2000). Within two weeks of the report, more than 100,000 people had become infected with the flu.

The illness struck the king of Spain, Alfonso XIII, along with leading politicians. Between 30% and 40% of people who worked or lived in confined areas, such as schools, barracks and government buildings, became infected. Service on the Madrid tram system had to be reduced, and the telegraph service was disturbed, in both cases because there were not enough healthy employees available to work. Medical supplies and services couldn't keep up with demand.

The term "Spanish influenza" rapidly took hold in Britain. According to Niall Johnson's book "Britain and the 1918-19 Influenza Pandemic" (Routledge, 2006), the British press blamed the flu epidemic in Spain on the Spanish weather: "… the dry, windy Spanish spring is an unpleasant and unhealthy season," read one article in The Times. It was suggested that microbe-laden dust was being spread by the high winds in Spain, meaning that Britain's wet climate might stop the flu from spreading there. 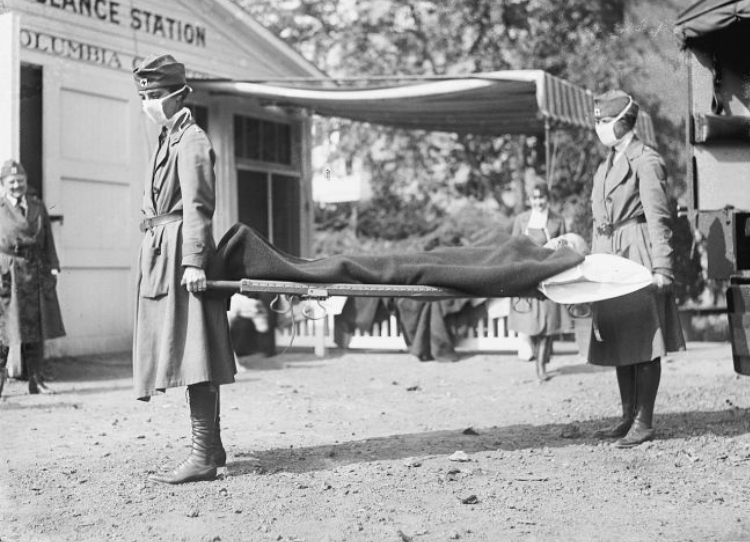 Members of the Red Cross give a demonstration at an Emergency Ambulance Station in Washington, D.C., during the influenza pandemic of 1918 (Image credit: Library of Congress)

What were the symptoms of the flu?

Initial symptoms of the illness included a sore head and tiredness, followed by a dry, hacking cough; a loss of appetite; stomach problems; and then, on the second day, excessive sweating. Next, the illness could affect the respiratory organs, and pneumonia could develop. Humphries explains that pneumonia, or other respiratory complications brought about by the flu, were often the main causes of death. This explains why it is difficult to determine exact numbers killed by the flu, as the listed cause of death was often something other than the flu.

By the summer of 1918, the virus was quickly spreading to other countries in mainland Europe. Vienna and Budapest, Hungary, were suffering, and parts of Germany and France were similarly affected. Many children in Berlin schools were reported ill and absent from school, and absences in armament factories reduced production.

By June 25, 1918, the flu epidemic in Spain had reached Britain. In July, the epidemic was hitting the London textile trade hard, with one factory having 80 out of 400 workers go home sick in one evening alone, according to "The Spanish Influenza Pandemic of 1918-1919: New Perspectives" (Routledge, 2003). In London, reports on government workers absent due to the flu range from 25% to 50% of the workforce.

The epidemic had rapidly become a pandemic, making its way around the world. In August 1918, six Canadian sailors died on the St. Lawrence River. In the same month, cases were reported among the Swedish army, then in the country's civilian population and also among South Africa's laboring population. By September, the flu had reached the U.S. through Boston harbor. 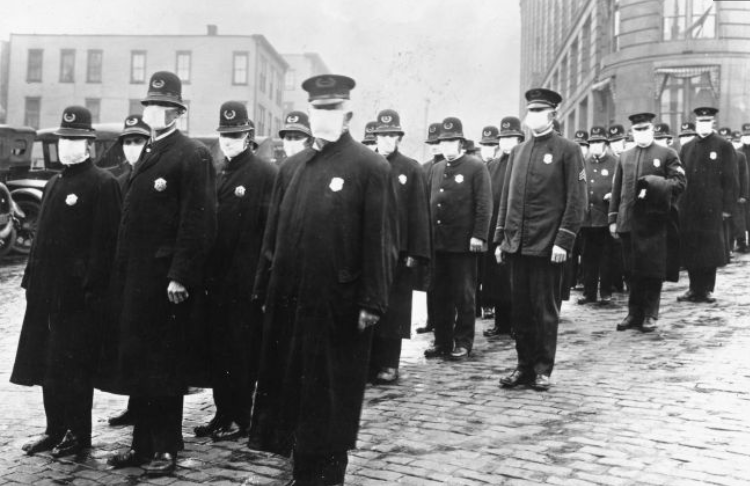 What advice were people given?

Doctors were at a loss as to what to recommend to their patients; many physicians urged people to avoid crowded places or simply other people. Others suggested remedies included eating cinnamon, drinking wine or even drinking Oxo's meat drink (beef broth). Doctors also told people to keep their mouths and noses covered in public. At one point, the use of aspirin was blamed for causing the pandemic, when it might actually have helped those infected.

On June 28, 1918, a public notice appeared in the British papers advising people of the symptoms of the flu; however, it turned out this was actually an advertisement for Formamints, a tablet made and sold by a vitamin company. Even as people were dying, there was money to be made by advertising fake "cures." The advert stated that the mints were the "best means of preventing the infective processes" and that everyone, including children, should suck four or five of these tablets a day until they felt better.

Americans were offered similar advice about how to avoid getting infected. They were advised not to shake hands with others, to stay indoors, to avoid touching library books and to wear masks. Schools and theaters closed, and the New York City Department of Health strictly enforced a Sanitary Code amendment that made spitting in the streets illegal, according to a review published in the journal Public Health Reports.

World War I resulted in a shortage of doctors in some areas, and many of the physicians who were left became ill themselves. Schools and other buildings became makeshift hospitals, and medical students had to take the place of doctors in some instances. 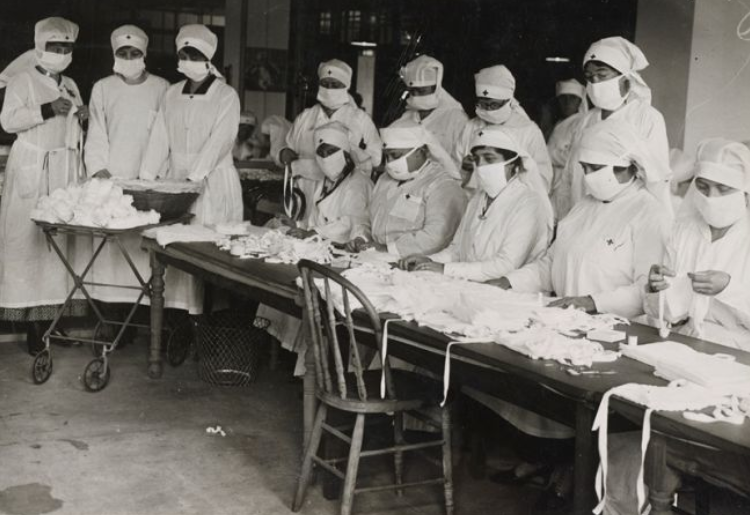 How many people died?

By the spring of 1919, the numbers of deaths from the Spanish flu were decreasing. Countries were left devastated in the wake of the outbreak, as medical professionals had been unable to halt the spread of the disease. The pandemic echoed what had happened 500 years earlier, when the Black Death wreaked chaos around the world.

Nancy Bristow's book "American Pandemic: The Lost Worlds of the 1918 Influenza Epidemic" (Oxford University Press, 2016) explains that the virus affected as many as 500 million people around the world. At the time, this represented a third of the global population. As many as 50 million people died from the virus, though the true figure is thought to be even higher.

Bristow estimates that the virus infected as much as 25% of the U.S. population, and among members of the U.S. Navy, this number reached up to 40%, possibly due to the conditions of serving at sea. The flu had killed 200,000 Americans by the end of October 1918, and Bristow claims that the pandemic killed over 675,000 Americans in total. The impact on the population was so severe that in 1918, American life expectancy was reduced by 12 years.

Bodies piled up to such an extent that cemeteries were overwhelmed and families had to dig graves for their relatives. The deaths created a shortage of farmworkers, which affected the late summer harvest. As in Britain, a lack of staff and resources put other services, such as waste collection, under pressure.

The pandemic spread to Asia, Africa, South America and the South Pacific. In India, the mortality rate reached 50 deaths per 1,000 people — a shocking figure.

How does this compare to seasonal flu?

The Spanish flu remains the most deadly flu pandemic to date by a long shot, having killed an estimated 1% to 3% of the world's population.

The most recent comparable flu pandemic occurred in 2009 to 2010, after a new form of the H1N1 influenza strain appeared. The disease was named the "swine flu" because the virus that causes it is similar to one found in pigs (not because the virus came from pigs).

The swine flu caused respiratory illnesses that killed an estimated 151,700-575,400 people worldwide in the first year, according to the Centers for Disease Prevention and Control. That was about 0.001% to 0.007% of the world's population, so this pandemic was much less impactful than the 1918 Spanish flu pandemic. About 80% of the deaths caused by swine flu occurred in people younger than 65, which was unusual. Typically, 70% to 90% of deaths caused by seasonal influenza are in people older than 65.

A vaccine for the influenza strain that causes swine flu is now included in annual flu vaccines. People still die from the flu every year, but the numbers are far lower, on average, compared to those for the swine flu or Spanish flu pandemics. Annual epidemics of seasonal flu result in about 3 million to 5 million cases of severe illness and about 290,000 to 650,000 deaths, according to the World Health Organization.