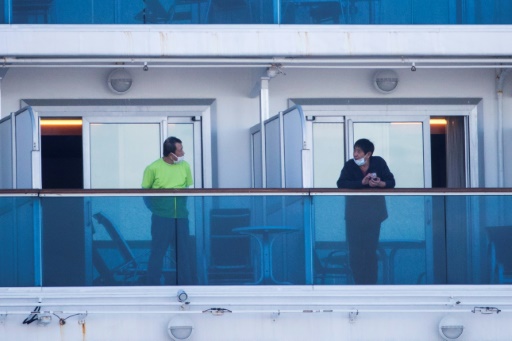 Passengers are asked to keep their distance from each other Photo: AFP

44 more people on cruise ship test positive for virus; some elderly to be allowed off

Another 44 people on board a cruise ship moored off Yokohama have tested positive for the coronavirus, the country's health minister said Thursday.

Health Minister Katsunobu Kato said the 44 new cases were from another 221 new tests. They raise the number of infections detected on the Diamond Princess to 218, in addition to a quarantine officer who also tested positive for the virus.

Kato said authorities now want to move elderly people off the ship if they test negative for the virus, offering to put them in government-designated lodging.

"On the ship, there are those of advanced age and with pre-existing conditions," he told reporters.

"There are also those who are having to stay in rooms with no windows until the incubation period finishes" on Feb 19, he added.

"We will conduct tests for those who are high-risk and if they test negative, those who wish to disembark can go and live in a lodging facility that the government will prepare. We wish to start the operation from tomorrow or later," he said.

Of the newly diagnosed cases, 43 are passengers, and one a member of the crew.

Kato said five people from the ship are currently in serious condition in hospital, four of whom have tested positive for the virus. Test results for the fifth are still being processed.

The Diamond Princess has been moored off Yokohama since February 3, after it emerged that a former passenger who disembarked in Hong Kong last month had tested positive for the virus now named COVID-19.

The ship was placed into quarantine shortly afterwards and authorities have asked passengers and crew to remain on board until February 19.

Those who have tested positive for the new virus have been taken off the ship to medical facilities, but questions have been raised about whether the quarantine on the ship is working, with dozens of new cases diagnosed almost daily.

Passengers are confined to cabins and required to wear masks and keep their distance from each other when they are allowed out for brief periods on open decks.

Japan initially tested around 300 people on the ship who had close contact with the former passenger or displayed symptoms, but they have gradually expanded the testing pool as new cases have been detected.

So far, 713 people have been tested, with officials saying they are currently limited by capacity.

In addition to the cases detected on the ship, Japan has confirmed 28 infections, among them evacuees who were flown back to the country from Hubei, the Chinese region where COVID-19 first emerged.

Four flights have brought back hundreds of evacuees, most of whom have been placed in "self-quarantine" in government-designated hotels.

Evacuees from the first flight, which landed on Jan 29, were cleared to leave the quarantine on Wednesday night, after testing negative in a final round of checks.

The first evacuees to leave the quarantine departed their hotel in Chiba, east of Tokyo, on Wednesday night, thanking local residents for their solidarity.

More were leaving on Thursday morning, with others who arrived on later flights expected to receive clearance after an additional round of testing.

17th-century Plague Doctors Were the Stuff of Nightmares BY JESSLYN SHIELDS The long, beaked mask of the plague doctor…