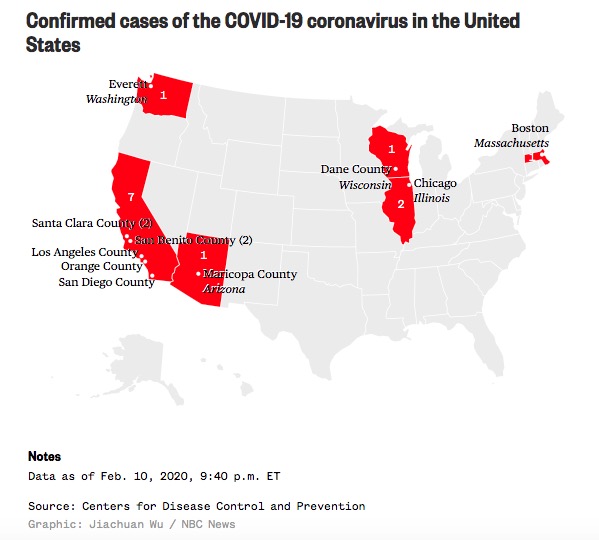 Coronavirus case confirmed in California is 13th in the U.S.

The diagnosis brings the total number of coronavirus cases in California to seven.
By Erika Edwards

A case of the new coronavirus has been diagnosed in San Diego County, California, bringing the total number of cases in the U.S. to 13.

The patient had been evacuated from Wuhan, China — the center of the coronavirus outbreak that has killed more than 1,000 people and sickened more than 40,000 others — and had been under a 14-day federal quarantine at Marine Corps Air Station Miramar, according to a statement from the UC San Diego Health.

The patient, who was doing well and had minimal symptoms, was under observation and isolation at UC San Diego Health, the statement said.

The patient had initially been released from the hospital and sent back to quarantine after a possible mix-up with the test results, the Centers for Disease Control and Prevention said Tuesday.

Twelve other cases have been diagnosed in the U.S. Most have been in California, with others in Arizona, Illinois, Massachusetts and Washington.

More than 100 people have been evacuated from China to the Miramar air station in San Diego since the outbreak began. Passengers from Wuhan have been under 14-day federal quarantines since leaving China.

You Don't Have to Sacrifice Pleasure to Maintain Self-Control, According to Researchers Written by Kelsey Donk When most people…