You Don't Have to Sacrifice Pleasure to Maintain Self-Control, According to Researchers

When most people hear "self-control," they think about denial. For most of us, having self-control means denying ourselves pleasurable things — a piece of cake, a new pair of shoes, or yet another episode in a Netflix binge. But as an international team of marketing researchers points out, that reasoning isn't quite right. It's not a loss of self-control if you don't think you'll regret it afterward.

Have Your Cake and Eat It Too

Let's stick with the food thing for a while. After all, that's how many studies begin to look at self-control. But according to a recent paper published in the Journal of Consumer Psychology, those studies could have some flaws. This new team of researchers wanted to know if it was possible to both consume tasty food and maintain self-control. They began by reviewing nearly 300 studies on self-control to find out how scientists think about pleasure and restraint.

In 95.9 percent of those studies, the researchers found that science usually pits "healthy" food against "unhealthy" food. And usually, that indulgent, tasty food is synonymous with failure. Food that symbolizes failure includes chocolate cake, chips, ice cream, soft drinks, french fries, and pizza — stuff that's generally high in sodium, fat, and/or sugar. Then there are the healthy, "good" choices: fruit salad, granola bars, apples, yogurt, raisins, vegetables, salad, water, and fruit juice, which are usually low in (or at least believed to be low in) sodium, fat, and sugar.

But the researchers found that eating "indulgent" food doesn't necessarily mean you lack self-control. Instead, for a choice to mean you've failed at self-control, it has to fulfill these two requirements:

If the choice doesn't meet those requirements, it isn't a self-control failure. So, contrary to most studies on self-control, ice cream, french fries, and pizza aren't inherently "bad." They could just be delicious, pleasurable eating choices that are also high in fat. Good to eat in moderation, but not worthy of feelings of shame and failure. 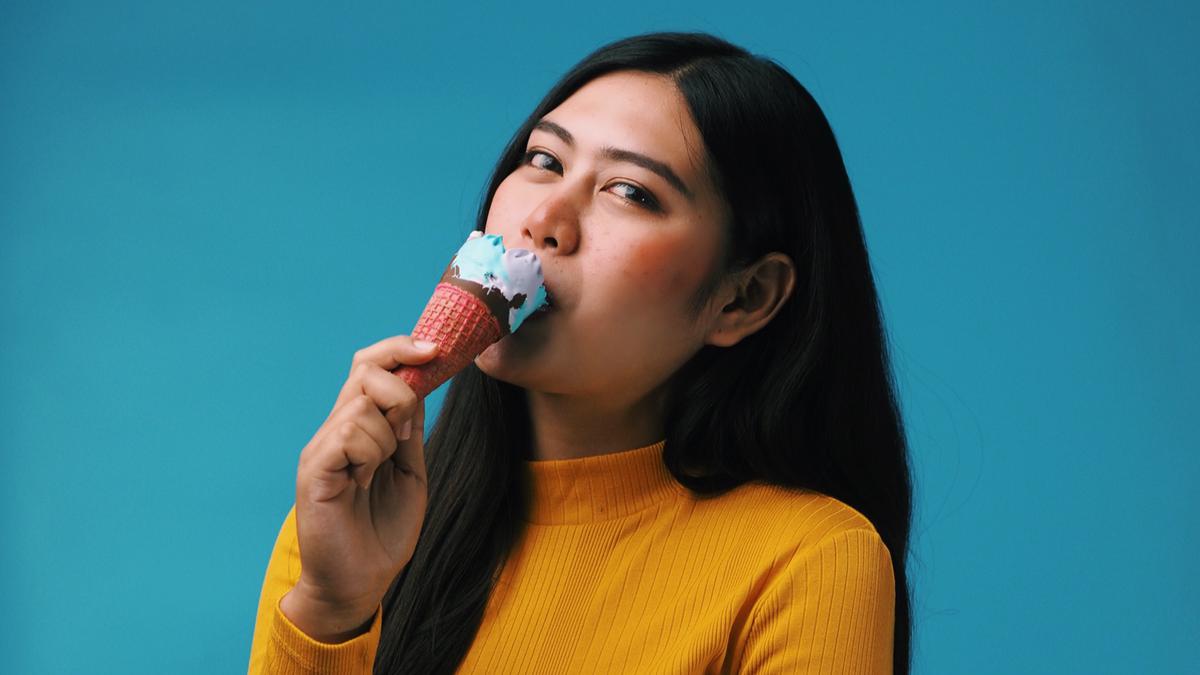 When it comes to weight-loss and overconsumption, the study's authors say the best practice is not to think about building up walls of self-control, but rather to eliminate the need for self-control at all. This could involve some reframing. What if we think less about denying ourselves nice things, and instead focus on finding more pleasure?

"Presented with the opportunity to eat cake or carrot sticks, a person intent on losing weight would experience a self-control failure when they choose to eat the cake and expect to regret having done so," said Dr. Irene Scopelliti, associate professor of marketing at Cass Business School, in a press release. The anticipation of regret is what we have to pay attention to here. The piece of cake symbolizes weight gain for that person, and they know that eating the cake will make them feel like they're undoing their weight-loss goals. The pleasure of the cake goes away and is replaced with layers of shame.

"If the same person ate only a small piece of cake, however," said Dr. Scopelliti, "they may not experience a self-control failure because they haven't eaten enough to violate their goal of losing weight and trigger regret." Get the pleasure from eating the cake and feel good about your goals without denying yourself or feeling shame. Win, win, win, win!

We'll say it again! Just because you eat cake, you haven't automatically failed at weight loss — much less at controlling your desires. Cake itself isn't the problem, even though we often put it on a list of "bad" food. The problem is in the categories, which oversimplify how nutrition works. Food isn't simply "good" or "bad" for us. And weight-loss isn't a matter of eating only "good" food and shunning "bad" food.

So, we're almost always wrong when we talk about self-control and food. Even a person with weight-loss goals is capable of both eating a slice of cake and having self-control. If you know a small piece won't undo everything (and almost always, it won't), you can indulge without feeling immense regret and shame after. That's especially true if you're not on a weight-loss plan. As Joachim Vosgerau, another author on the study, notes, "If a person is comfortable with their weight and does not anticipate to regret in advance their food consumption choices, then we cannot say that person lacks self-control."

The same goes for non-food indulgences: It's okay to watch Netflix before you finish your work or buy yourself something nice you haven't budgeted for. As long as you know it won't derail your goals and you won't regret the decision, enjoy yourself. Pleasure is a good thing!

Coronavirus case confirmed in California is 13th in the U.S. The diagnosis brings the total number of coronavirus…

The Less-Than-Pleasant Meanings of 13 Little-Known Flowers By Bob Strauss Pretty much since the dawn of human civilization, flowers…