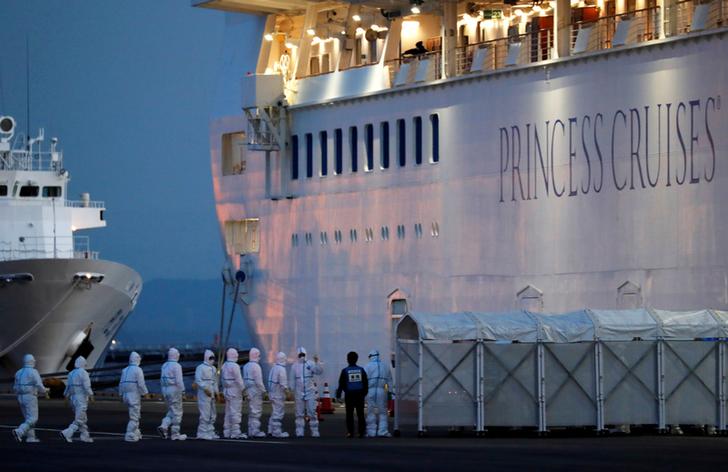 Three more people on a cruise ship off Japan have tested positive for the new coronavirus, bringing the number aboard to 64, the government said Saturday, with passengers facing a two-week quarantine.

The latest confirmation came a day after an additional 41 passengers were found to have contracted the virus, which has killed hundreds of people, most of them in China, where it has infected more than 30,000 on the mainland.

Japanese authorities have so far tested about 280 people on board the Diamond Princess, which was quarantined after a former passenger, who disembarked in Hong Kong last month, was diagnosed with the virus.

The three passengers -- an American man in his 70s, an American woman in her 60s and a Chinese woman in her 30s -- were taken from the Diamond Princess and hospitalized in Kanagawa Prefecture, the health ministry said, Kyodo News reported. The number of infections confirmed in Japan has now risen to 89.

There were more than 3,700 passengers and crew on the ship when it arrived off Japan's coast on Monday evening. It docked in Yokohama on Thursday to resupply for a quarantine that could last until Feb 19.

One of those found infected is in serious condition. Many on board are elderly and at greater risk of developing complications from the virus.

Testing was initially carried out on those who displayed symptoms or had come into close contact with the former passenger diagnosed.

Japan has already reported at least 25 cases of coronavirus aside from the infections on board the ship, and evacuated hundreds of citizens from Wuhan, the Chinese city where the pathogen emerged, including on a fourth flight Friday.

Passengers on the ship have been asked to stay inside their cabins to prevent new infections and have expressed confusion and frustration.

The World Health Organization (WHO) called on Tokyo to provide sufficient support, including mental care, for the passengers and patients.

"There's a lot to do to support those patients. Not just from the point of view of their physical health but from a mental health perspective," Michael Ryan, head of the WHO's Health Emergencies Program, told reporters in Geneva on Friday.

"It's quite scary, very, very scary to be in that situation," he said. "It's a very stressful situation for those individuals."

But he also called for calm, saying: "Let's be careful here not to overreact. This is a very close community living in very close quarters."

The Japanese government on Saturday barred another cruise ship from docking in Japan.

Prime Minister Shinzo Abe said passengers on the Holland America's Westerdam won't be allowed into Japan. He said suspected coronavirus patients were on board.

The ship, with more than 2,000 people, was near Okinawa and was seeking another port, said Overseas Travel Agency official Mie Matsubara.

"We are getting desperate," she said. "We hope we can go somewhere so that passengers can land."

The decision came after three more cases were diagnosed Saturday among 3,700 passengers and crew on the quarantined Diamond Princess in Yokohama port. Those aboard remain under a 14-day quarantine.

Did pangolins spread the China coronavirus to people? Genetic sequences of viruses isolated from the scaly animals are 99%…