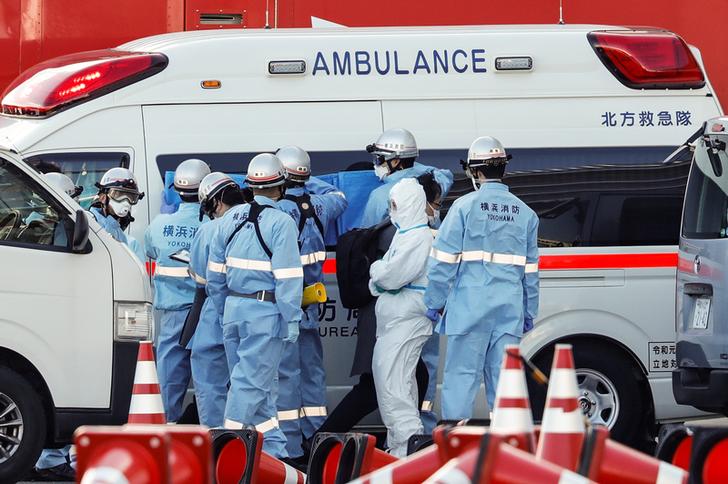 Firefighters wearing protective gear cover the windows of an ambulance to protect the privacy of passengers, who tested positive for coronavirus, before they are transferred from the cruise ship Diamond Princess to a hospital, after the ship docked at Daikoku Pier Cruise Terminal in Yokohama, on Thursday.
Photo: REUTERS/Kim Kyung-Hoon

TOKYO
Ten more people on a cruise liner in the port of Yokohama haver tested positive for coronavirus, NHK said on Thursday, citing the health ministry.

About 3,700 people are facing at least two weeks quarantined on the cruise ship after 10 people initially were confirmed positive with the virus and moved out to medical facilities.

If the new infections are confirmed, that would bring the total number of coronavirus patients in Japan to 45.

The ship was caught up in the global coronavirus epidemic after an 80-year-old Hong Kong man tested positive for the virus after disembarking the ship late last month. 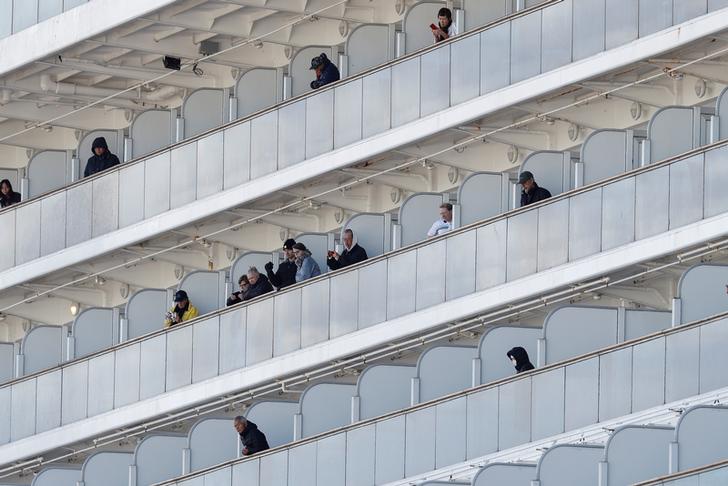 Passengers watch as ambulances transfer passengers, who tested positive for coronavirus, from the cruise ship Diamond Princess to a hospital, after the ship arrived at Daikoku Pier Cruise Terminal in Yokohama, on Thursday.
Photo: REUTERS/Kim Kyung-Hoon

Passengers on Carnival's Diamond Princess, which arrived in Yokohama on Monday after a 14-day round trip, face another two weeks on the ship off Yokohama port near Tokyo.

They and their relatives took to social media to detail their predicament and situations on the cruise ship.

A passenger using the handle @daxa_tw tweeted early Thursday morning that crew members handed out medication refill request forms for those in need of medicines.

Another 73 people on the Chinese mainland died on Wednesday from the coronavirus outbreak, the highest daily increase so far, bringing the total death toll to 563, the country's health authority said on Thursday.

The National Health Commission said another 3,694 coronavirus cases were reported throughout the country on Feb 5, bringing the total to 28,018.

Japan prepares ferry to be used for quarantine as virus spreads 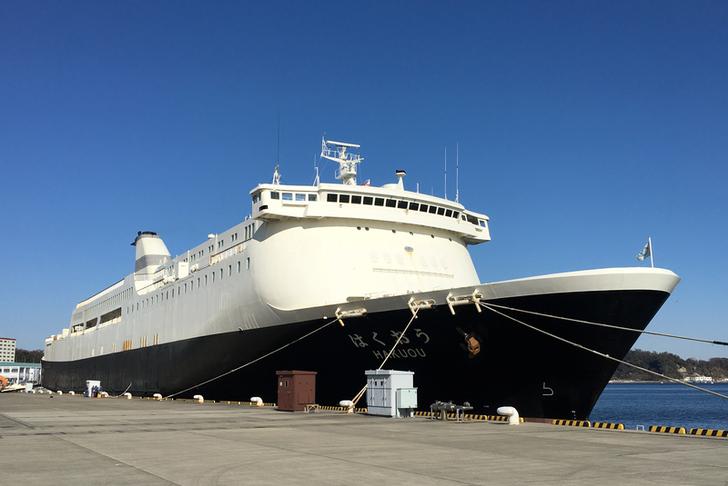 The Hakuo quarantine ship, which could house people suspected of carrying the coronavirus, is seen docked at Yokosuka naval base near Tokyo, on Wednesday.
Photo: REUTERS/Tim Kelly

TOKYO
Japan's Self-Defense Forces prepared a chartered ferry on Wednesday to use as a quarantine ship that could house hundreds of suspected coronavirus cases as the number of infected people in the country rises.

The 17,000-ton Hakuo was docked at the Yokosuka naval base near Tokyo, which is also the home port of the U.S. Navy's Ronald Reagan carrier. If put into service, the ship will initially take up to 94 people, but can accommodate more.

"Around 300 people could comfortably live on the ship and it has a maximum capacity for 500, although that would mean queues for the baths and other facilities," a Japan Self Defense Force official told Reuters.

Preparations aboard the Hakuo come as health authorities placed more than 3,700 people on two weeks quarantine on a cruise liner anchored off Japan after health officials confirmed that 10 people on the ship had tested positive for coronavirus and more cases were possible.

Japan's government has come in for criticism that it has been too slow to respond to the health crisis. Unlike other countries, Japan has not yet forcibly quarantined people who may carry the coronavirus, including Japanese returning on evacuation flights from Wuhan in central China where the epidemic began.

Japan has 33 confirmed coronavirus cases so far, including 17 people who had been in Wuhan and the 10 on the cruise liner.

Since Saturday, Japan has refused entry to foreigners who have been in Hubei province, where Wuhan is located, and may widen the ban to other parts of China.

People quarantined aboard the Hakuo will be confined to quarters for around 10 days and provided with a tablet computer and Wifi to help them pass the time, the Japanese defense official said. Each will be provided with toiletries and other necessities during their stay, with meals brought to their rooms, he added.