James Grantham Turner is the James D Hart professor of English at the University of California, Berkeley. His latest book is Eros Visible: Art, Sexuality and Antiquity in Renaissance Italy (2017). He lives in Berkeley, Chicago and London. 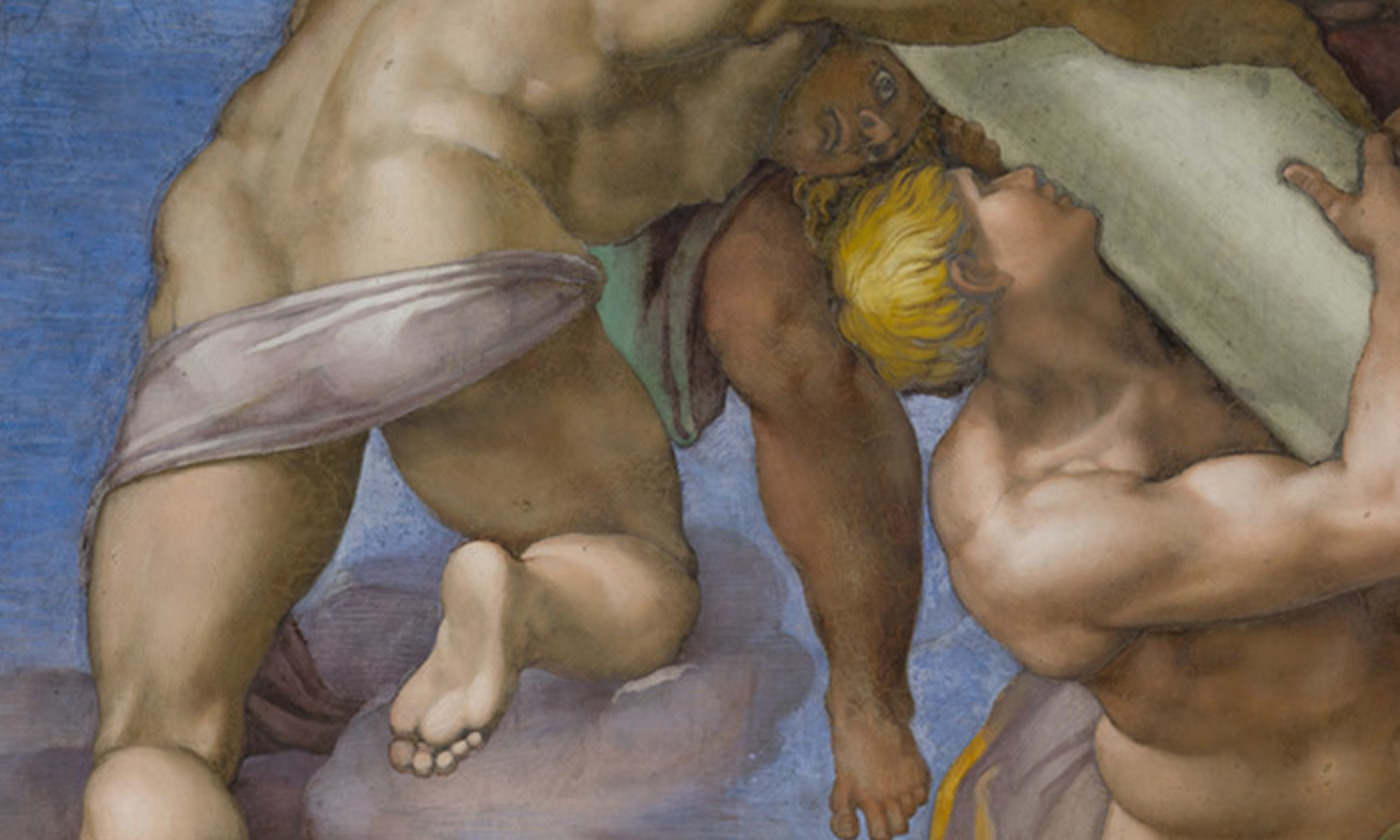 In the Sistine Chapel, you look up at Michelangelo’s Last Judgment and see muscular angels hurtling through space, nude or with just a scrap of cloth tight across their buttocks (Figure 1, above). Then after leaving the Vatican, you browse a bookstall and find an illustrated sex manual, designed by another great artist, where your eye is drawn to the same figure driven by a different impulse (Figure 2). 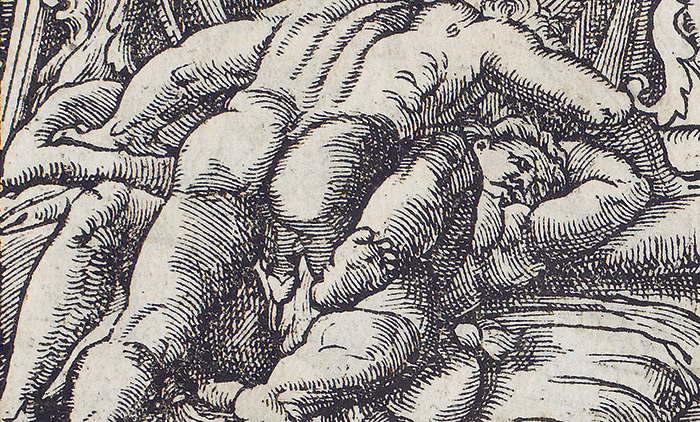 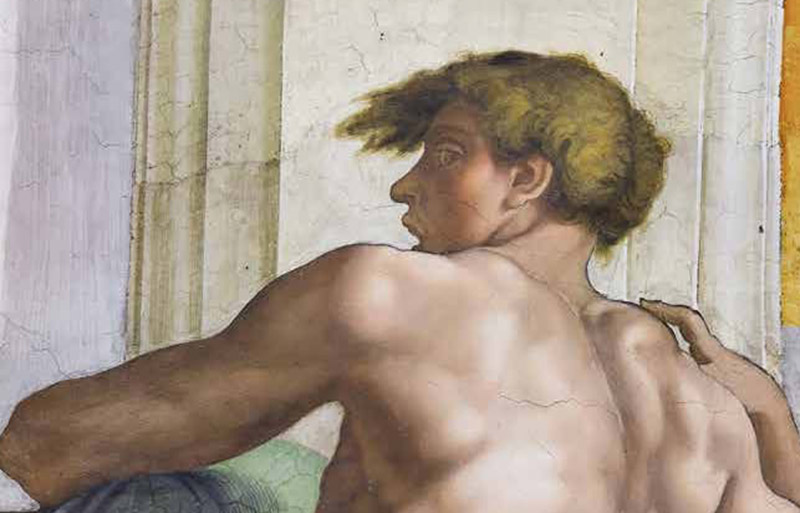 The beauty of classical art was more highly valued in the early Renaissance (the 15th century), as was the love-theory of Plato. However, this led to an even deeper split between the pure ideal and base reality, between sacred and profane love. Neoplatonism polarised the celestial and the earthly Venus, and insisted that bodily experience must be expunged from true love. Beautiful figures in art were still mostly draped, and rare exceptions such as Botticelli’s The Birth of Venus were kept for private viewing and interpreted as strictly celestial. The questioning and collapse of these rigid distinctions is the erotic revolution.

Like most revolutions, this one was hardly total. It differed from the ‘sexual revolution’ of the 1960s in that it didn’t change social history, and no new contraceptive device liberated women from the endless cycle of marriage or prostitution. A more accurate phrase would be ‘erotic-aesthetic revolution’, radically changing the way that Italians conceived, created and thought about art. Great changes happened in the art world, which included the emergence of powerful patronesses, even though female artists and models were few. Passion and amore were valued as the wellsprings of creativity – not a distraction or pollution. Channels opened up between inspiration and arousal, between sacred and profane, between what is now separated into ‘art’ and ‘pornography’. Artists felt licensed to express all the passions and ‘motions of the soul’, not merely the chaste ones. Critics endorsed this by praising works that cause ‘whoever gazes’ to feel ‘an amorous fire/in their heart and their gestures’. Beauty was discovered in earthly as well as celestial love. Erotic response became the guarantee of the ‘living’ quality now most valued in art.

One way I measure this revolutionary change is by tracking key words such as lust or lascivious in writings about love and art. Philosophers of the Platonic school worshipped the celestial Venus – ‘chaste, orderly, superior, divine and spiritual’ – but denounced the lower, corporeal Venus as the root of all evil, ‘inferior, disorderly, variable, lascivious, animal, obscene’. Savonarola insisted on burning all ‘lascivious pictures’ (pitture lascive). Yet within an amazingly short time, lascivia was used without disapproval. 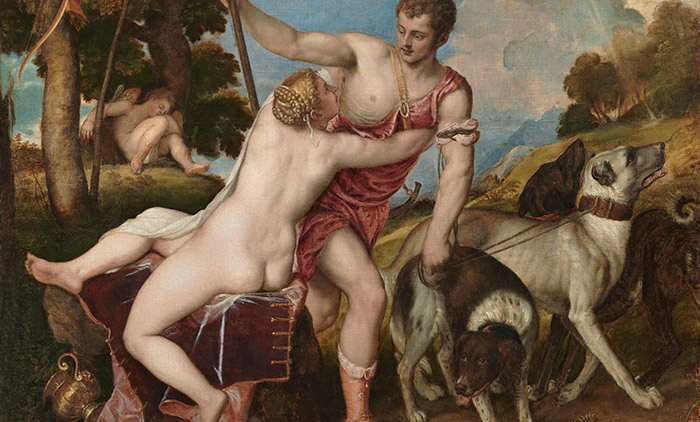 Leonardo da Vinci boasts that one of his religious paintings provoked ‘lust [libidine] in the owner’. For Leonardo, this is not a matter of shame but of pride in the superior power of painting, which ‘moves the senses more readily than poetry does’, and ‘depicts libidinous acts so lustful that they have incited viewers to play the same game’. The red-flag words libidinosi, lussuriosi and incitare shed their moralistic overtone. Leonardo in effect denies the fall of Adam and Eve and the shame that makes us hide the genital organ: ‘man is wrong to feel ashamed to name it, much less to display it, always covering and hiding what should be adorned and displayed with due solemnity’. Aretino justifies erotica in the same way:

What’s so bad about seeing a man mount on the back of a lady? So the animals should be freer than us? It would seem to me that the thingy that Nature gave us to preserve herself should be worn round the neck as a pendant, and in the cap as a medal … They should establish Holidays and consecrate Vigils and Festivals for it, not shut it up in a bit of cloth or silk.

Artists went ahead and visualised those ‘festivities’ (Figure 5). 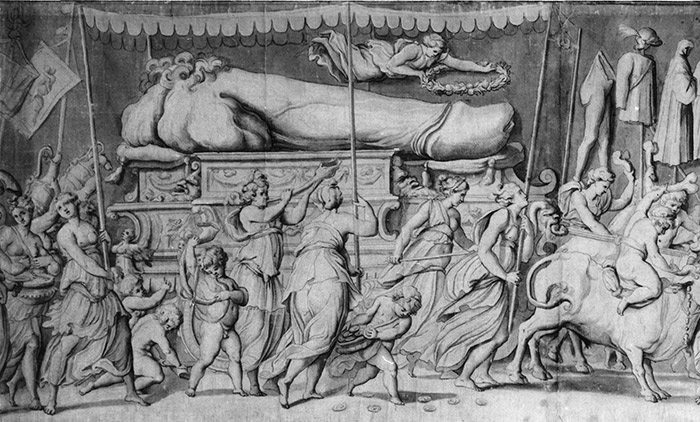 This might all seem a phallocentric game that only elite males could join. In fact, I have found countercurrents to the alleged repudiation of female sexuality in accounts of the arousing effect of painting and sculpture. In Aretino, the viewer is ‘filled’ with the libido streaming from the Venus statue. Titian’s Venus melts and softens the viewer rather than giving him a hard-on: he ‘feels himself growing warm and tender, and the whole of his blood stirring in his veins’. Certainly the recipient is assumed to be male (the canvas was painted for Philip II of Spain, after all) but face-to-face with Venus’s bottom he is ‘penetrated to the marrow’.

As a final example of the revolution in action, consider another plate from that album of sexual postures, this time a lady mounting a man, a 19th-century reconstruction based on a tracing from a now-lost engraving (Figure 6). 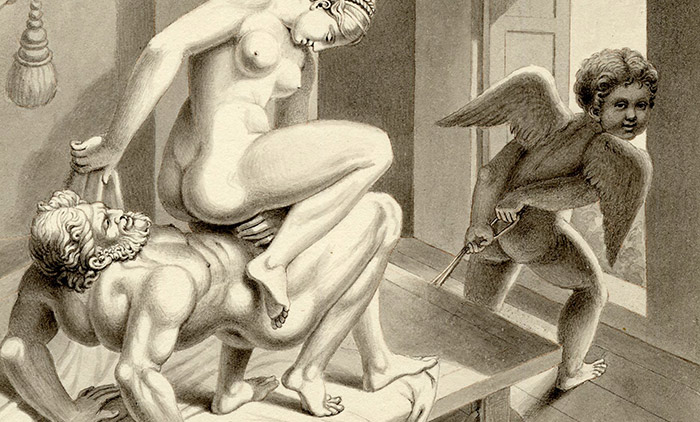 The posture comes from one of those ‘lascivious things’ that amused the ancient Romans, but the modern Roman artist made a scene of it: Aretino, who wrote sonnets on the whole set of positions, imagines the man yelling: ‘Cupid, you little fuck, stop pulling the cart!’ This ‘lascivious’ print then inspired one of the most entrancing images of the High Renaissance: Parmigianino’s love-god carving himself a new bow (Figure 7). Parmigianino’s Eros/Amor turns to lock eyes with us, and his implicit question is still: What do you make of this, do you like what you see? 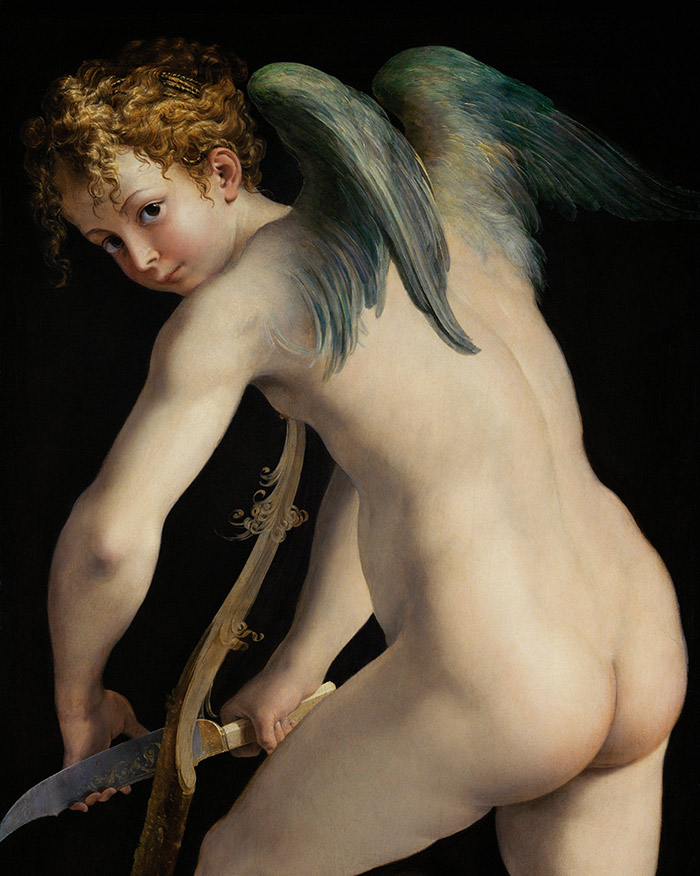 The Milky Way has a long history of cosmic cannibalism Our galaxy has stolen many a star. A computer…