The Milky Way has a long history of cosmic cannibalism

Our galaxy has stolen many a star. 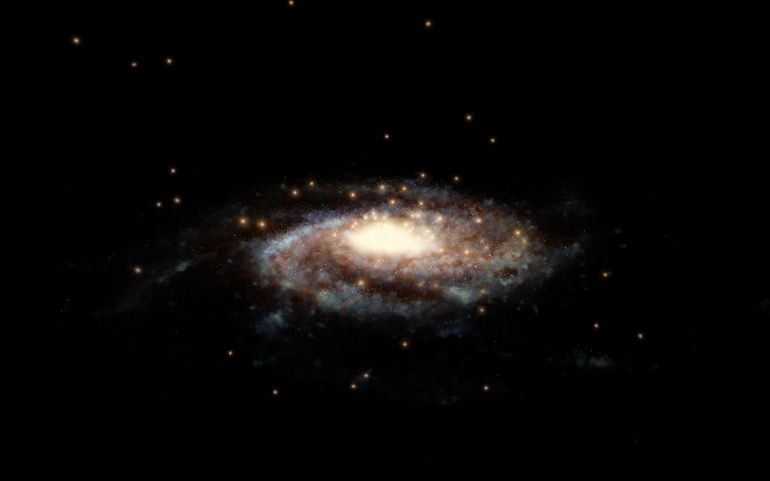 In its infancy, the Milky Way galaxy was far from a peace-loving cosmic body crawling through the universe. It lurched forward in search of more stars to accrete, growing and evolving over time. In a new report published in Nature Astronomy, a group of scientists led by Carme Gallart from the Institute of Astrophysics of the Canary Islands confirm that the Milky Way cannibalized a dwarf galaxy one-fourth its size nearly 10 billion years ago. Their analysis of data collected by the European Space Agency's Gaia satellite helps illustrate what happened in the aftermath, when hundreds of thousands of stars were flung far away from their points of origin.

"For several years, there had been hints that the inner Milky Way halo, close to the sun, included stars that originated in an external galaxy," says Gallart. "But it was only after the second data release of the Gaia mission that this merger event could be confirmed in more detail."

Gallart and her team began their investigation with a modest goal—determining the ages of about 600,000 stars found in the Milky Way. Then something peculiar caught their attention. The data they were examining represents stellar luminosity as a function of color, from blue to red. (Luminosity is affected by many different factors, but most notably by chemical composition—blue stars are formed out of lower concentrations of metals, while red stars form from higher concentrations.) The team began noticing that some of the stars were showing up enigmatically in two distinct components of the Milky Way's halo (a spherical structure that stretches beyond the main disk of the galaxy). Some were more blue than others, and previous research had already linked these blue stars as having originally been a part of a sausage-shaped dwarf galaxy called Gaia-Enceladus. But the other stars, comprising a red sequence, didn't have a proper origin story.

So the team set about identifying the ages for these stars, in hopes this would shed some light into where they came from. This is far from an easy task. “Unlike other stellar properties like luminosities, colors, velocities, or chemical composition, stellar ages cannot be measured directly,” she says. “They require comparing observed properties such as luminosities and colors with the predictions of stellar evolution models.” Understanding the actual luminosity of a star means you need to know its distance, and since Earth is located within the “inside” of the Milky Way, you have to figure out the distance for each star independently, one-by-one.

Luckily, Gallart and her colleagues specialize in deriving star ages—and they found that the red sequence stars were similar in age to the blue ones. The picture they paint is that these halo stars were about three billion years old when the Milky Way cannibalized Gaia-Enceladus, making the stars around 13 billion years old. That’s older than the average star found in the Milky Way’s thick disk. The merger event likely flung the blue stars originally from the dwarf galaxy into the Milky Way’s halo. Meanwhile, the red stars identified in the halo seem to be among the first stars ever to have formed in the Milky Way. They came from the disk, and the power and energy released by the merger tossed them into the halo.

Moreover, it seems the merger turned star formation in the main disk up to 11. The disk had been continuously forming stars since its inception, but Gaia-Enceladus acted as a sort of power meal for the Milky Way, delivering gas that fed stellar nurseries. The new findings suggest it continued to churn out stars at record rates until about 6 to 8 billion years ago, when it transitioned into a thinner disk dominated by younger stars.

“I think we already got a good broad picture of what happened at the beginning of the Milky Way’s history,” says Gallart. “We have here an idea of the very first moments of evolution of the Milky Way disk and halo.”

The findings are strong thanks to the robustness of the Gaia mission data. More precise ages of the stars could tell us how long it actually took for the Milky Way to completely eat up Gaia-Enceladus, and it's entirely possible Gaia or another mission could help ascertain those numbers one day. It’s possible this isn’t the only merger event that helped shape the Milky Way. Gallart says that there is at least one ongoing investigation hinting at such an event, so it looks like we’re just starting to unravel the Milky Way’s secret, ancient predatory history.