Aftershocks can last for centuries

In a study published this month in the Bulletin of the Seismological Society of America, Shinji Toda and Ross Stein explored the importance of aftershock duration—how long the aftershocks persist—on seismic hazard. This is of greatest importance in the slowly deforming continental interiors where we have too few clues to devine the risk.

Typically, hazard assessments assume that high ‘background’ seismicity rates (lots of small quakes) translate to a higher probability of large earthquakes and strong shaking. However, in slowly-deforming regions, such as Eastern North America, Australia, and Inner Honshu, this could be wrong if the seismicity clusters are actually aftershocks of historic or even prehistoric earthquakes. So, Toda and Stein probed under what circumstances aftershocks can last from 100 to 1,000 years, in order to determine if the seismic hazard in many intraplate regions is inflated. This hypothesis was first proposed by Peter Basham and John Adams of the Geological Survey of Canada in 1983, and then more fully developed by John Ebel at the Weston Observatory of Boston College in 2000. 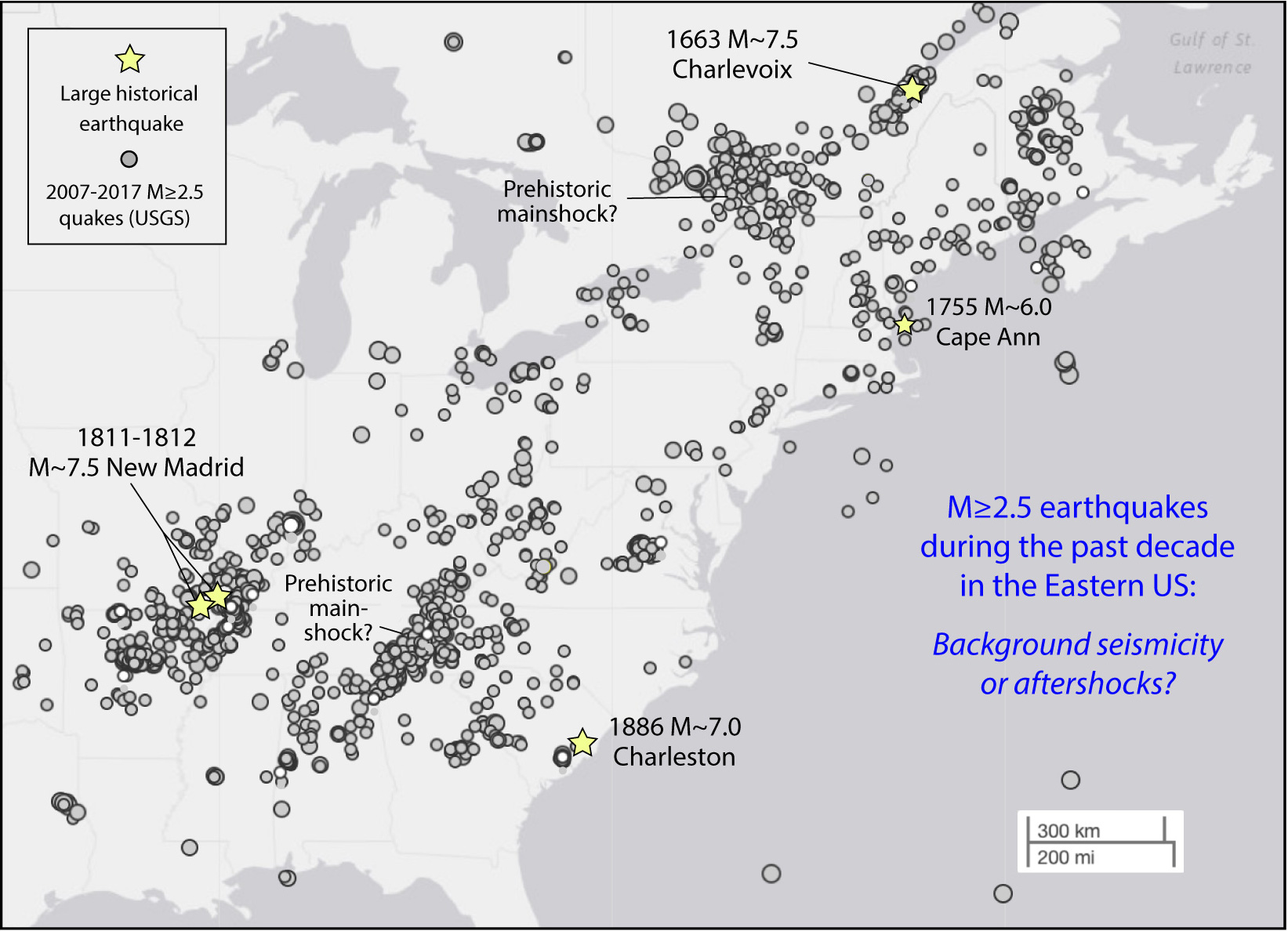 This figure from Toda and Stein, 2018 shows the location of large historical earthquake in Eastern North America as well as M=2.5+ earthquakes in the past decade. What is highlighted here is how the majority of recent quakes are around the location of historic earthquakes. This could indicate that they are late aftershocks.

What determines how long aftershocks last?

Aftershocks are earthquakes whose frequency decreases with rapidly with time in a particular way: The rate of shocks 10 days after the mainshock will be one-tenth the rate on the first day; 100 days after the mainshock, the aftershock rate will be one-hundredth of the first day, etc. While it has long been known that the larger the mainshock, the more aftershocks strike, it is not clear that aftershocks last longer after a larger mainshock. Toda and Stein used data from Japan to determine whether it is mainshock magnitude or the location, and thus stressing rate of an area, that governs aftershock duration, because in Japan, large mainshocks are abundant and well recorded, and so they could measure the quake rate before the mainshocks and then observe or project when the aftershocks will decay to the background.

Toda and Stein found that what controls the aftershock duration is the location of the aftershocks, not the magnitude or location of the mainshock. For example, at subduction zones, aftershock sequence typically lasted for 30-1,000 days. In contrast, within the interior of a tectonic plate, aftershock sequences were projected to last more than 30 years, and in some cases, thousands of years. Aftershocks that occurred along very slowly slipping faults lasted the longest.

Implications for seismic hazard: Have we got it backwards?

If the majority of earthquakes we see today, in say, Eastern North America or Australia were in fact aftershocks of large historic or prehistoric quakes, their abundance would not be representative of the chance of large mainshocks, since in those locations, a large mainshock has already occurred. 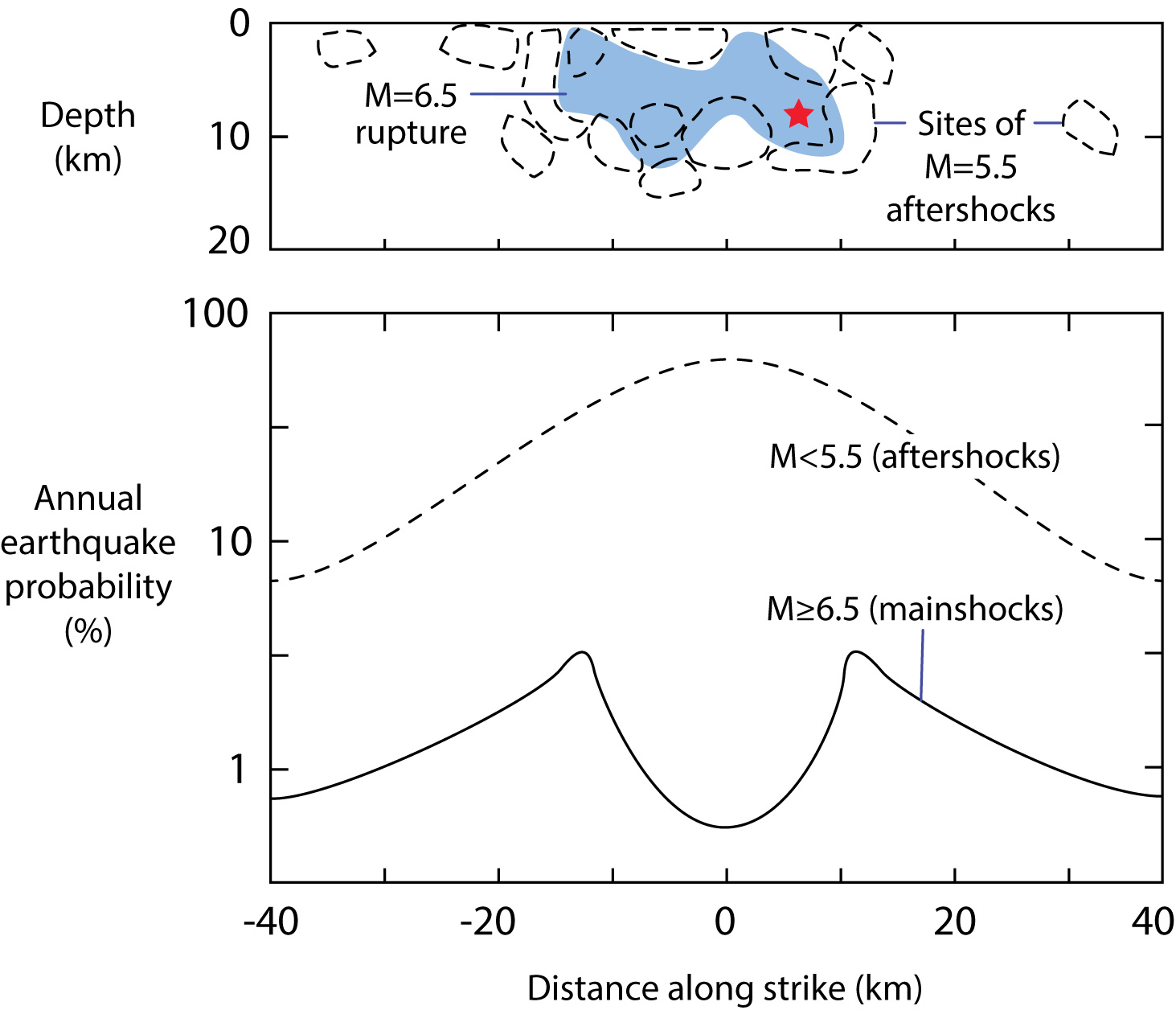 A schematic illustration of the pitfall of basing the likelihood of future mainshocks on current seismicity if, in fact, that seismicity is composed of aftershocks. Top panel: The M=6.5 epicenter is the red star, which ruptured a fault over the blue surface. Aftershocks tend to occur at the periphery of the rupture (dashed patches). Bottom panel: While the aftershock probability is greatest near the center of the former mainshock, the chance of another large shock is actually much lower in the center, and is instead greatest just outside the past rupture.

So, in areas such as New Madrid, MO, Charleston, SC, or Charlevoix, Quebec, the seismic hazard could be overinflated, and that the regions in between these historic and prehistoric quakes may actually be at greater risk than currently thought.

Prof. John Ebel told us, “When I first came to New England after completing my Ph.D. at Caltech, like everyone else I thought that aftershocks lasted only weeks or months. However, the more I studied them, the more I came to believe that aftershocks of the northeastern earthquakes were lasting for centuries. This study is exciting because it provides evidence that aftershock sequences can last for very long periods of time. This forces us to look at the routine earthquake activity in a place like Japan in a new way. This may ultimately be a step forward toward earthquake forecasting because it may help us learn which small earthquakes might be harbingers of future strong shocks and, which are simply continuing aftershocks of a past strong event.”

Can decluttering your house really make you happier? By Sarah Griffiths Tidying up our homes and lives is often…

The surprising downsides of being drop dead gorgeous By David Robson Good looks can get you far in life,…