Can decluttering your house really make you happier? 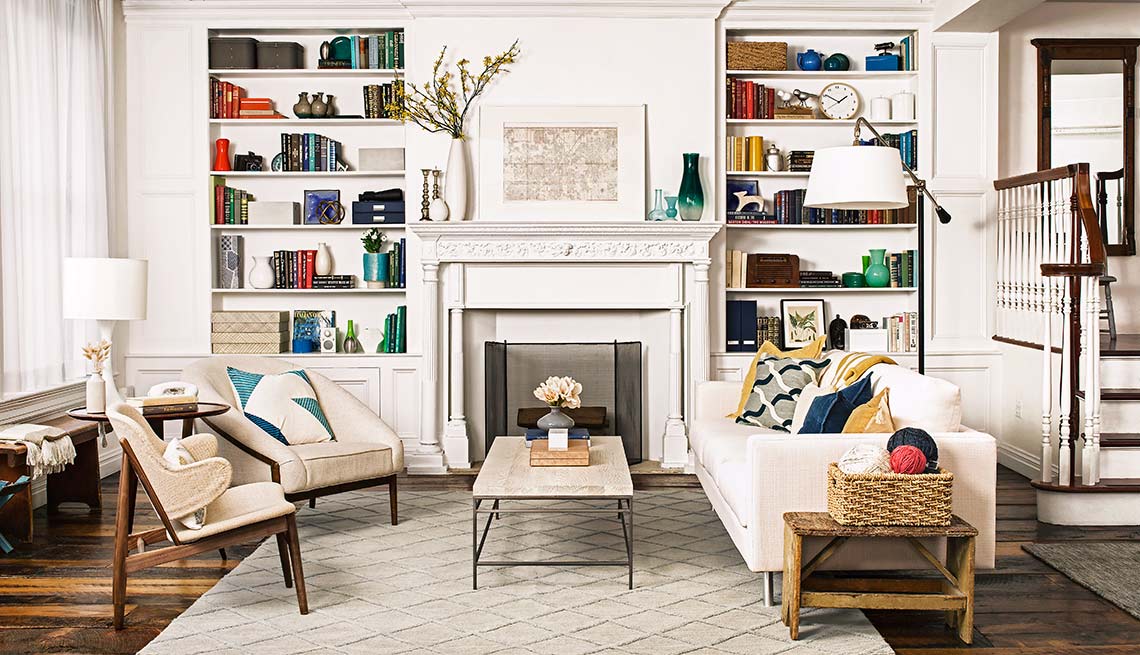 Tidying up our homes and lives is often promoted as a life-changing step, but for some people throwing away their belongings can trigger the same brain activity as physical pain.

“Tidying can transform your life.” This is the beguiling promise from Japanese decluttering evangelist Marie Kondo. Around 11 million people have bought her book, The Life-Changing Magic of Tidying Up, and millions more have tuned in to watch her in action on Netflix in the hope of learning how to emulate Kondo’s brand of minimalistic bliss.

Her “KonMari” method of decluttering is straightforward – tidy your home by category instead of by room, pull everything out before sorting it out, take in the full horror of your materialism, and keep only things that are useful or “spark joy”. Nothing is safe from her mission to reduce the amount of stuff in our lives – clothes, kitchen utensils, paperwork and most controversially, books, are sifted through, assessed and discarded.

Kondo is far from the only one advocating this simpler, tidier lifestyle. In the UK, Sophie Hinchliffe, better known as Mrs Hinch, has been demonstrating to her Instagram followers and TV viewers how having a cleaner, tidier home can lead to a better life, while in California, professional organiser Beth Penn has written a book and set up her own company to help people sort out their stuff. There are dozens of other books and decluttering services to be found with a quick search of the internet. 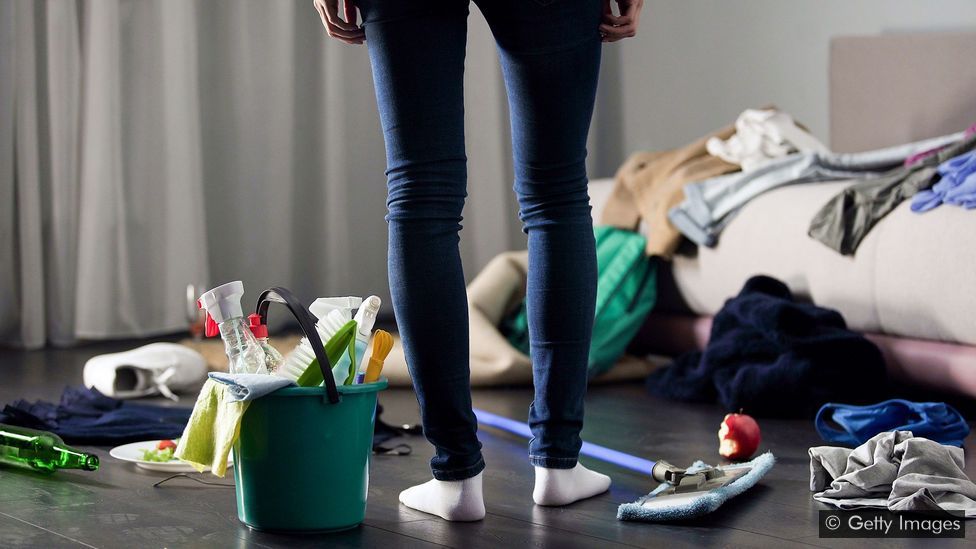 But for most of us, piles of clutter may not seem like a big deal. It might mean we struggle to find a clear surface to put a glass down on occasionally or we end up stubbing a toe on a carelessly misplaced pile of sports equipment, but it doesn’t make our life any worse. In fact, most of us quite like our stuff – it helps to turn the buildings we live in into homes and can give us a rush of satisfaction.

“For hoarders, objects can represent comfort and security,” says James Gregory, a clinical psychologist and expert on hoarding at the University of Bath. In the most extreme cases, hoarding is recognised as a medical disorder that can rob people of their quality of life. One study by researchers at Yale University used brain scans to show that for people with the disorder, throwing out objects activates a part of the brain that’s also responsible for processing pain.

Most of us may not feel so strongly about our possessions, but things that are tied to emotionally significant memories can nevertheless represent a piece of your identity that is difficult to discard. When you struggle to part with that jersey you wore on the junior varsity basketball team, for example, you are not really clinging to the shirt itself. Instead, you’re hanging onto the memories represented by that now-tattered item of clothing you probably won’t wear again. Its sentimental value may make giving the jersey away feel like giving up a piece of your own identity, says Gregory.

But can collecting all these belongings really be making our lives better? Or could we be better off with less stuff? 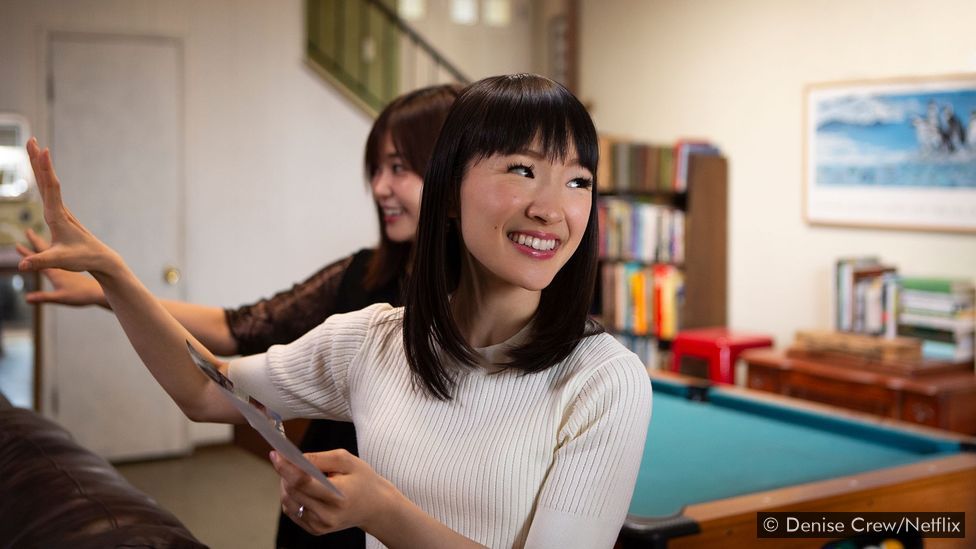 Certainly, it seems living in an untidy space can negatively affect many areas of our lives. Stephanie McMains and Sabine Kastner, psychologists at Princeton University, found for example that clutter can reduce our ability to focus on a task, which may explain why some people cannot stand to work at a messy desk.

When our surroundings feel full, it can also make us feel more anxious and stressed, with one study by psychologists Rena Repetti and Darby Saxby at University of California, Los Angeles, finding mothers living in messy houses had higher levels of the stress hormone cortisol. Clutter can also make it harder to fall asleep and can even make us more likely to reach for junk food, according to one study, which found participants using a “chaotic kitchen” ate twice as many cookies as those in an organised kitchen.

Scientific research suggests Kondo is on to something and the effects of tidying can leave us feeling invigorated and satisfied.

“One of the obvious advantages to a tidy house is that being able to easily locate things will cause you less stress,” says Chris Stiff, a lecturer in psychology at Keele University. There is evidence that tidy environments help us think more clearly. For example, researchers at the University of Navarra found volunteers made more mistakes inputting data in a messy environment, than in a neat one.

“The idea of tidying and being neater can give you a feeling that you’re capable of achieving goals, which is one of our key drivers,” adds Stiff. “If you can look at a new area of organisation, it’s good for your self-esteem and can make you feel like you can master the next challenge too.”

Stiff believes one advantage of the KonMari method is that it includes detailed instructions but still provides a fair amount of latitude for how to interpret it, making you more likely to succeed in achieving your goal. There is even evidence that finishing a task thanks to hints rather than specific instructions feels more rewarding. 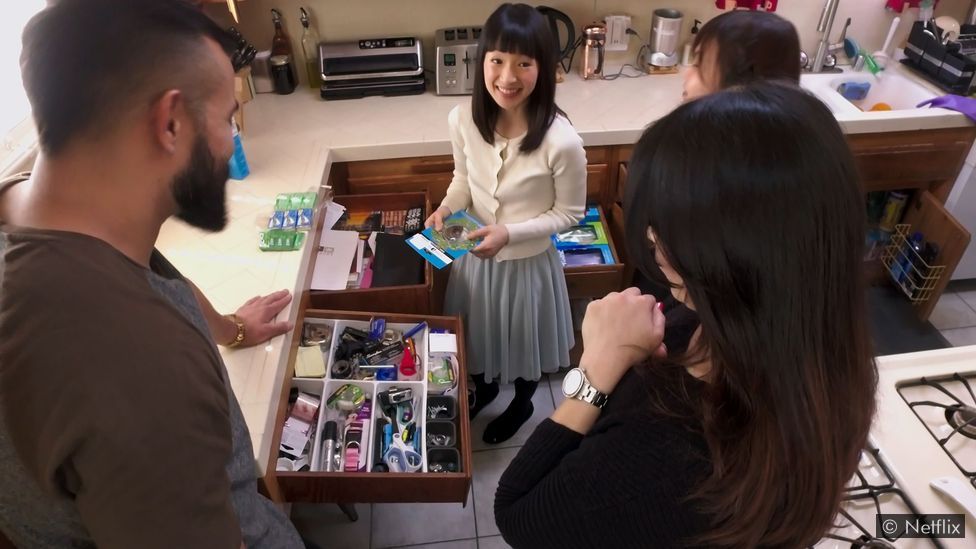 Sophie Scott, a cognitive neuroscientist at University College London, agrees that tidying up, whether that’s colour-coordinating a bookshelf or overhauling a wardrobe, acts as a reward, which increases the release of the neurotransmitter dopamine, also known as the brain’s “pleasure chemical” in the brain.

“Part of what the reward system does is give a pleasurable sensation of getting what you want and if it’s addictive, that’s a shortcut to that outcome,” Scott says. The current craze for decluttering and creating a strictly curated “capsule wardrobe” on vlogging channels also often involves buying fashionable essentials and throwing out passé pieces. Scott believes this provides a double boost for our reward system, the first from decluttering and the second from buying things.

She warns, however, that while a good clean out can make us happy, it will only improve our mood if we set ourselves manageable goals. “The way that’s guaranteed to make us unhappy is to set a goal you can’t reach – like decluttering your house in a day,” says Scott. “You’re setting yourself up to fail and you will feel worse.” 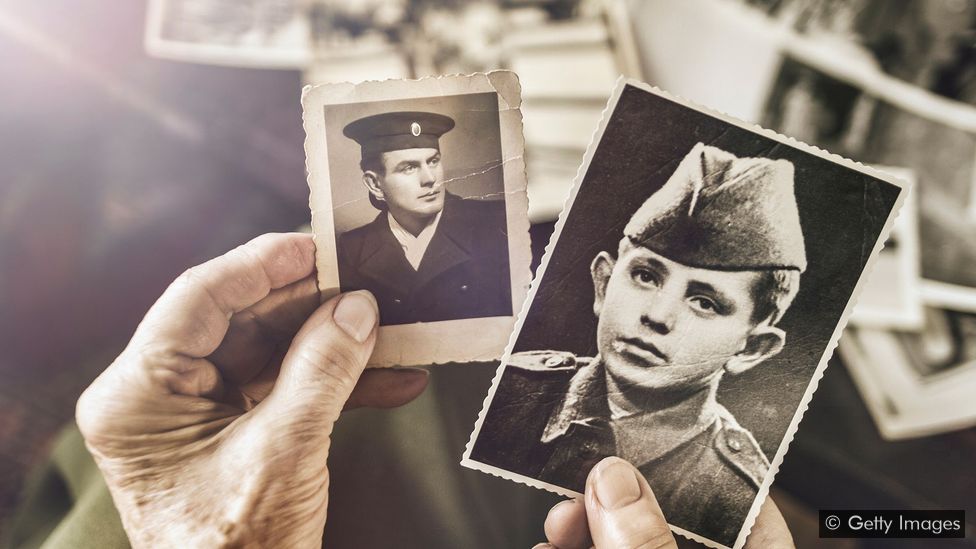 But should we eschew our worldly possessions altogether in pursuit of happier lives? Many religious figures have sought to live simple lives in the belief that they are not overburdened with possessions and feel free. But we should perhaps be cautious about shedding items we have a deep sentimental connection to.

“It could go either way,” says Stiff. “It could be a very negative experience [if you throw away irreplaceable sentimental objects] but it’s possible you could feel cleansed – you might feel free of your past.”

An artist named Michael Landy from London took this concept to its extreme. In 2001, he destroyed every one of his 7,227 possessions in public for an artwork called Break Down, including clothes, love letters, his car and his father's sheepskin coat. Celebrating a retrospective of his work, he told BBC Culture: “It was the happiest two weeks of my life… At moments, admittedly, I felt like I was witnessing my own death, because people I hadn’t seen for years would turn up, and I thought, ‘Well, they’d only turn up for my funeral.’ But often I did feel real elation. No one had ever destroyed all their worldly belongings before.” However, he said onlookers were at times appalled, especially when seeing the destruction of personal mementoes. 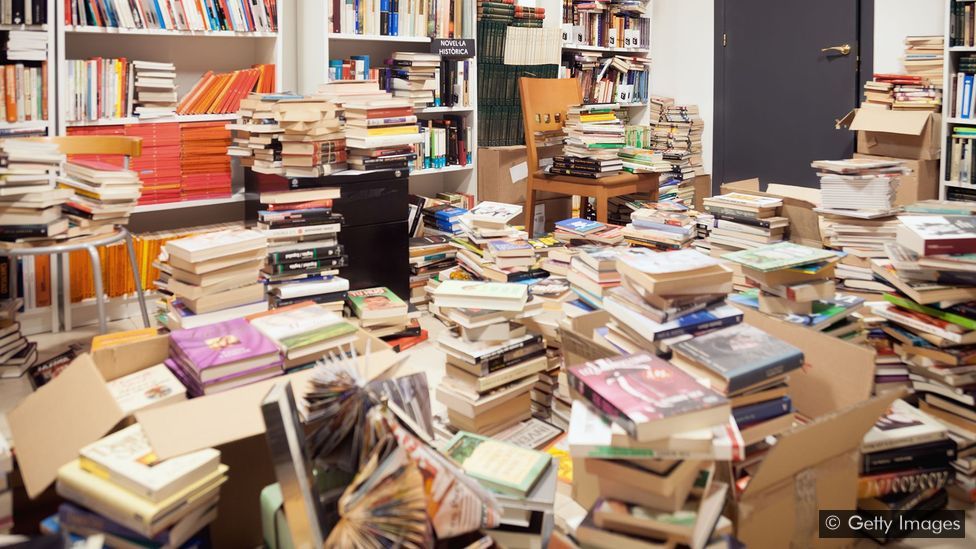 Scott says we shouldn’t rush to get rid of all of our belongings as they too can bring us happiness. She kept a cache of photos from her teenage years and didn’t look at them for a long time, but didn’t want to let them go either. “Last year I got them out and I’m so glad I kept them,” she says. “They have brought me joy and others too.”

As well as regret, there is a risk that someone who has embraced a wholehearted cull of clutter may extend this ruthless approach to other areas of their lives. One of Marie Kondo’s clients is quoted in her book as saying: “Your course taught me to see what I really need and what I don’t. So, I got a divorce. Now I feel much happier.”

There is some evidence that clutter might affect our relationships – one study found that people were less able to correctly interpret the emotions of movie characters from their faces if there was a lot of background clutter in the scene.

Most of us, however, tend to treat personal relationships differently from possessions. Scott says that as social primates, relationships are among the most treasured things in our lives and even “flakey” friends can be invaluable in a time of need. “We need social clutter and we’re designed to cope with it,” she says. 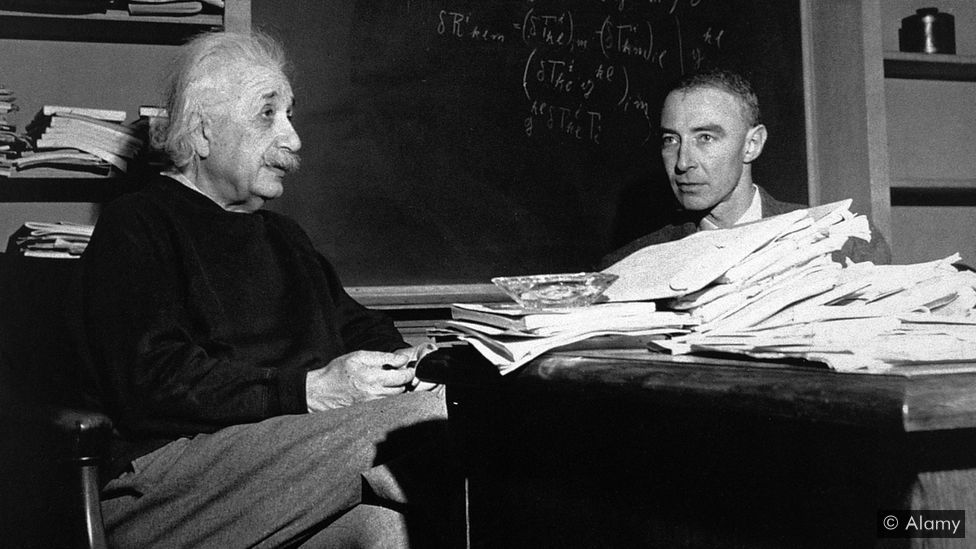 Many people find joy in collecting. Vintage style expert and blogger Kate Beavis thinks that minimalist homes are “boring and bland”. Her house in Bedfordshire, UK, is packed with handbags, toys, phones and cookware from the 1960s. “I love unusual vintage homewares but also love to find a bargain so when I find something I don't care if I already have a few – the more the merrier,” she says.

Stiff also thinks there is a real value in clutter and nostalgia, especially if we are unlucky enough to develop Alzheimer’s in later life. “The use of the word clutter implies it’s things that don’t have value but those that evoke happy memories are valuable, especially to people with memory problems,” he says.

There are more immediate benefits too. One study by researchers at the University of Minnesota found a messy environment can make us more creative, whereas orderly surroundings make us more likely to conform to traditional expectations.

As Albert Einstein – the owner of a notoriously messy desk – is often quoted, although perhaps apocryphally, as saying: “If a cluttered desk is a sign of a cluttered mind, of what, then, is an empty desk a sign?”

Aftershocks can last for centuries POSTED ON MAY 25, 2018 BY TEMBLOR By David Jacobson, M.Sc. and Ross…