How Many Humans Could the Moon Support? 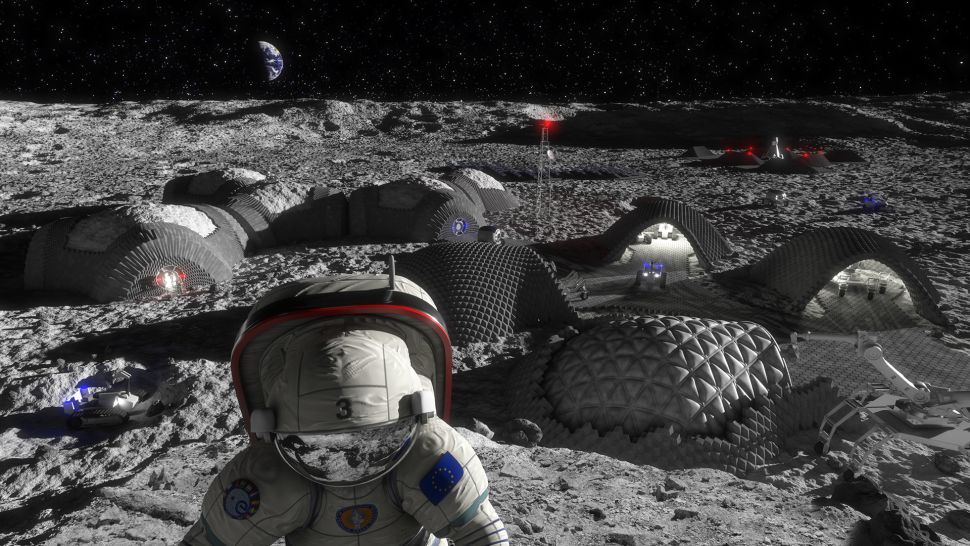 It's the year 3000. Having used up all of Earth's natural resources, humans have become a spacefaring race and established colonies on the moon. Vast, sealed domes cluster across its surface, housing cities populated by hundreds of thousands of people. This cold, gray rock has somehow become humanity's new home.

Of course, this is pure science fiction. But no vision of the future is complete without an extraterrestrial colony of humans, and since the moon is the closest celestial body to our planet, it's the easiest to imagine as our futuristic home.

But does this vision align with reality? Will the moon one day be a hot property, and if so, how many people could its unwelcoming landscape realistically support?

One way to answer that question, simplistically, is to consider the area of the moon. The moon's surface area is about 15.9% of Earth's overall land area (excluding the area of Earth covered by oceans). Technically, if we packed this area at the density of Earth's most populous cities, we'd be able to fit trillions on the moon's surface.

But how many people could fit on the moon's surface is a very different question than how many people that world could sustainably support. And in that regard, the moon is definitely Earth's poorer cousin.

"It's a pretty barren place," said Darby Dyar, a senior scientist at the Planetary Science Institute in Arizona and a professor of astronomy at Mount Holyoke College in Massachusetts. "Every species seeks to expand its ecological niche. But the new 'niche,' which is the moon, is very inhospitable for humans," Dyar told Live Science.

Unlike on Earth, water doesn't rain down freely on the lunar surface and collect into bodies we could drink from. Crucially, the moon also lacks an atmosphere with breathable air. Neither does Earth's natural satellite have existing ecosystems that could conveniently support fields of agriculture. The moon is also vulnerable to solar storms, eruptions from the sun's surface that send out electromagnetic radiation, which the moon — without the protection of a magnetic field — can't deflect. There are also huge temperature extremes, and long, alternating periods of darkness and light, Dyar said.

All this may make life on the moon seem impossible. Yet surprisingly, it isn't. In fact, the essentials for human existence — air, water, food and shelter — theoretically aren't as unattainable on the moon as you might expect.

Take air. To support a starting population of a few hundred people on the moon, we'd have to start by transporting air to the lunar surface, pumping it into sealed structures in which humans would live. That seems unsustainable, but in the short term, it would actually be fairly cost-effective, said Markus Landgraf, the moon project manager with the European Space Agency. "People don't use much air, and for a long time, we will not need to make the air on the moon. We can bring it in," he said. "Transportation costs for that are still manageable."

If that population grew to tens of thousands, however, we'd need to synthesize oxygen on the moon, an expensive process. But Landgraf said the growth of space exploration in the coming decades could make the process more economical.

That's because propelling spacecraft requires oxygen, so if the demand goes up, "it makes more economic sense to build oxygen generators on the moon for rocket propellant, rather than for drinking water and air for people," Landgraf said. That would drive down the production cost, making it cheaper to produce air for moon dwellers.

What about water? Until a few decades ago, researchers believed the moon was completely dry. But now they know there's a surprising amount of liquid spread across the lunar surface.

"We think water is left over from when the moon formed. And we know that comets, which are basically dirty snowballs, periodically impact the moon's surface," Dyar said. "There's good evidence to suggest that those [craters] where comets impacted the surface still have ice reservoirs in them."

Another water source, she said, comes in the solar winds that roar across space; charged with protons, these collide with electrons on the moon, forming hydrogen.

All this adds up to a decent amount of lunar water, perhaps enough to support a sizable population. And we've already developed technologies on the International Space Station to recycle drinkable water from astronaut's shower water, urine and sweat. This can even use the moisture from their breath. On the moon, that technology could create a closed-loop water source for inhabitants. 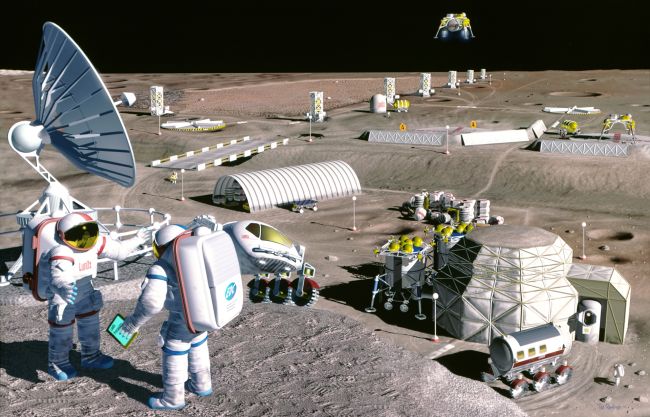 In a 1995 artist's concept of a moon colony, a lunar mining facility harvests oxygen from the resource-rich volcanic soil of the moon's Mare Serenitatis, a vast lava plain.(Image: NASA/SAIC/Pat Rawlings)

But even with recycling, Dyar said, those water reserves wouldn't be infinite; recycling water over and over again does come with some loss, so reserves would need to be topped up once in a while. What's more, extracting the moon's water by crushing lunar rocks and dredging up ice from deep craters, would require huge, costly amounts of energy, Dyar pointed out.

"My personal feeling is that colonization of the moon is going to depend on us bringing hydrogen there," she said. Transporting that would be costly, too: around $220,000 per kilogram, Landgraf said.

Without knowing how much water is currently on the moon's surface, it's also difficult to estimate how many people it could support. But we do at least know that it's possibly enough to provide a relatively sustainable water source. In any case, Landgraf estimated that lunar pioneers wouldn't need to tap the moon's water resources for at least the first five to 10 years of settlement; it will be cheap enough to transport water up there and recycle it for the dozen or so humans who are first likely to call moon their home.

As for lunar agriculture, we could mimic Earth's growing conditions with "almost-ecosystem-like closed domes," Landgraf said. Nurtured by long bouts of sunlight and showered with recycled water, lunar agriculture could feasibly scale up to feed thousands. There's already plenty of research to suggest that growing crops in space will work.

Fly me to the moon

There are still multiple unknowns about how we'd do all this in practice. But theoretically, natural resources could support tens of thousands, even millions, of people on the moon. So then, why aren't there already hundreds of us up there, gazing down at Earth?

Because the biggest constraints to colonizing the moon aren't necessarily limits to natural resources, Landgraf said, but the huge cost of transporting people up there by spacecraft. Doing it more economically would require bold technological leaps — like the invention of space elevators. If we had those, "then we're talking about tens of thousands of people on the moon," Landgraf said. "So, really, water isn't the constraint here. It's transportation."

There's another caveat, and this is where we return sharply to reality: For now, colonizing the moon isn't actually the goal. Sure, we could view the moon as a kind of Noah's ark in the event of an earthly apocalypse. But currently, international space agencies see the moon not as an outpost from disaster, but as a research hub — and a potential base from which to explore the rest of our solar system.

With that approach, Langraf said we could look to Antarctica for clues about human habitation. Probably the most lunar-like habitat on Earth, the Antarctic is home to fluctuating, seasonal population of between one and four thousand researchers who battle freezing, dry conditions to do their work. Since research currently drives planning on lunar habitation, that gives us an idea of how many people might realistically live on the moon in coming decades: a few thousand at a time, rather than millions or billions.

Even this population would probably taper off, replaced by cheaper, more efficient robots over time, according to Dyar. "As technology gets better, there's very little reason why you really need to send a human to do scientific research," she said.

However, that doesn't mean our dreams of lunar citizenship are over. There's one other factor: humanity's unquenchable drive to explore. That could compel future generations to colonize the moon in the millions or use it as a launching pad for other expeditions into space.

"Humans are one of the few species that are always exploring, even if there's no need," Landgraf said. "[We've] been very successful with this strategy. Would it make sense to change that? I don't think so."

Empathy vs. Sympathy: What Is the Difference? And Why You Should Care By Robert Longley Victims of Hurricane Katrina…