Will 2020 Be the Hottest Year on Record? 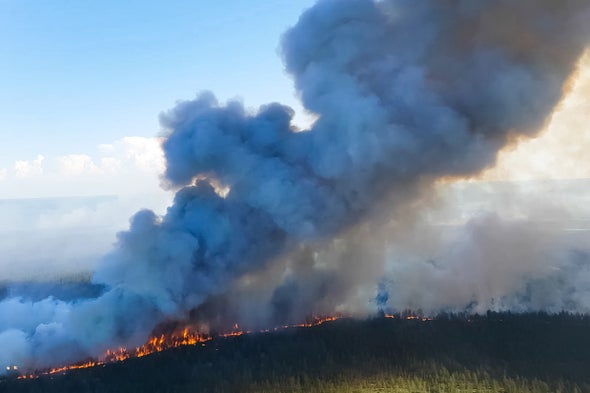 With 2020 more than halfway over, it is clear that this year will rank among the hottest in recorded history and possibly break the all-time record set in 2016. If 2020 does top the list, it will do so without the major El Niño event that boosted global temperatures four years ago—and thus will provide an important marker of the power of the long-term warming trend driven by human activities that emit greenhouse gases.

In its first seven months, 2020 has been the second-warmest year on the books, a mere 0.07 degree Fahrenheit behind 2016 at the same point, according to new data released today by the National Oceanic and Atmospheric Administration (whose records go back 141 years). This ranking now means “there’s no question that 2020 will be a top-five year,” Schmidt says. By his calculations, it has a 70 percent chance of becoming the hottest year, while NOAA gives it a 37 percent chance. The variation is partly because of the different ways each agency processes temperature data: NOAA does not extrapolate temperatures over the Arctic to make up for missing data there. And Schmidt says leaving that information out misses one of the fastest-warming spots on the globe.

One of this 2020’s notable hotspots has been Siberia, which has been covered by an angry, deep-red blotch on global temperature maps. The region has been exceptionally hot since the beginning of the year, contributing to this past January being the planet’s warmest on record. More recently the Siberian town of Verkhoyansk reported 100.4 degrees F. If this figure is verified by the World Meteorological Organization, it would be the first time recorded temperatures above the Arctic Circle have surpassed 100 degrees F.

But this hotspot is not the sole reason that 2020 is near the top of the charts. Above-average temperatures have been prevalent over large swaths of the globe. Asia, South America and Europe all had a record-warm first half of the year. Likewise most of the world’s oceans have also been very warm, says Ahira Sánchez-Lugo, a climatologist at NOAA’s National Centers for Environmental Information. And there are always hotspots somewhere on the globe in a given year, so the one in Siberia is not unusual, Schmidt says. Last year, for example, the main hotspot was elsewhere in the Arctic, in an area encompassing parts of Alaska, Canada and Greenland. 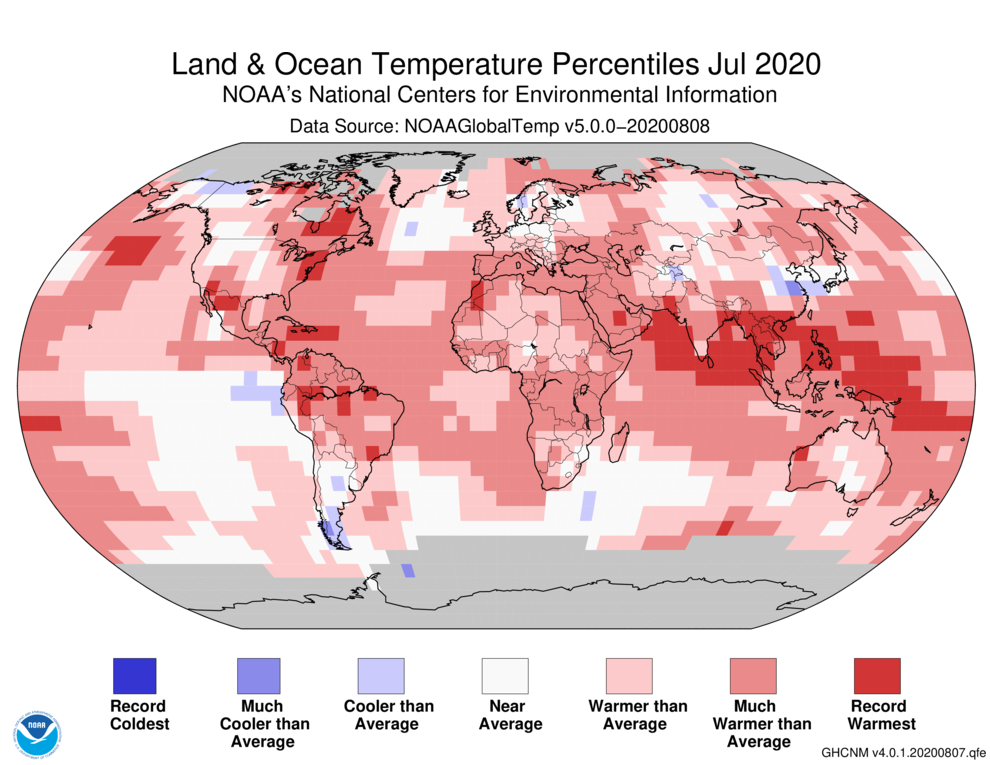 Where temperatures have been warmer or cooler than average across the globe during the first seven months of 2020. Credit: NOAA

Broad areas of warmth and more localized hotspots are both linked to the long-term warming trend. “It’s gotten to the point where these intense heat waves would not be possible in any reasonable amount of time in a non-human-perturbed climate,” Schmidt says. A recent analysis of the role of global warming in Siberia’s prolonged heat found that such extremes would happen around once every 80,000 years in the absence of anthropogenic warming. These extremes are also happening over larger areas than they would in the absence of climate change, Schmidt says.

The run 2020 is making for the title of hottest year is happening without the major El Niño event that helped propel 2016 to the top of the rankings. During an El Niño, a band of warm ocean water covers the tropical Pacific Ocean, which can raise global temperatures. “When we have a big El Niño event, we do tend to have a record being broken,” Schmidt says, adding that this factor is often what causes the record to be broken by a large amount. But an El Niño is not necessary to take the lead: both 2014 and 2015 became the then hottest year without one. “We’ve broken the records pretty consistently, even in years where we didn’t have an El Niño,” Schmidt says. This fact also speaks to the way the inexorable rise in warming has been steadily elevating the baseline temperatures that events such as El Niño or heat waves add to. Recently, even years with a La Niña event (which tend to be cooler, because colder ocean waters spread across the tropical Pacific) are warmer than El Niño years of decades past.

To that point, 1998, the one 20th-century year that remains in NOAA’s top-10 warmest, did have a major El Niño. It was a record-setting outlier at the time. But because of global warming, the earth’s baseline temperature has shifted so much higher that 1998 is now being left in the dust (2016, which had a similarly strong El Niño, was 0.63 degree F hotter). No matter where 2020 ends up in the standings, it will be warm enough to knock 1998 out of NOAA’s top 10. When that happens, all of the 10 warmest years in their records will have occurred since 2005—and the top seven will have occurred since 2014—Sánchez-Lugo says.

That bunching of heat records in more recent years is, again, because of long-term warming, which is stacking the deck for ever more frequent records. A 2017 analysis in Bulletin of the American Meteorological Society noted that between the late 19th century and 1980, new records for the hottest year would happen about every eight to 11 years. Since 1981, they have been occurring about every three to four years.

So if 2020 takes the top slot, it will not be entirely unexpected—and will be yet another stark example of how far the earth’s climate has deviated from its natural course. “Everything that you see is conditioned on this long-term trend,” Schmidt says. “I work for NASA, but it’s not rocket science.”

Can you manipulate your brain to stop your food cravings? New research conducted on the brains of mice suggest…