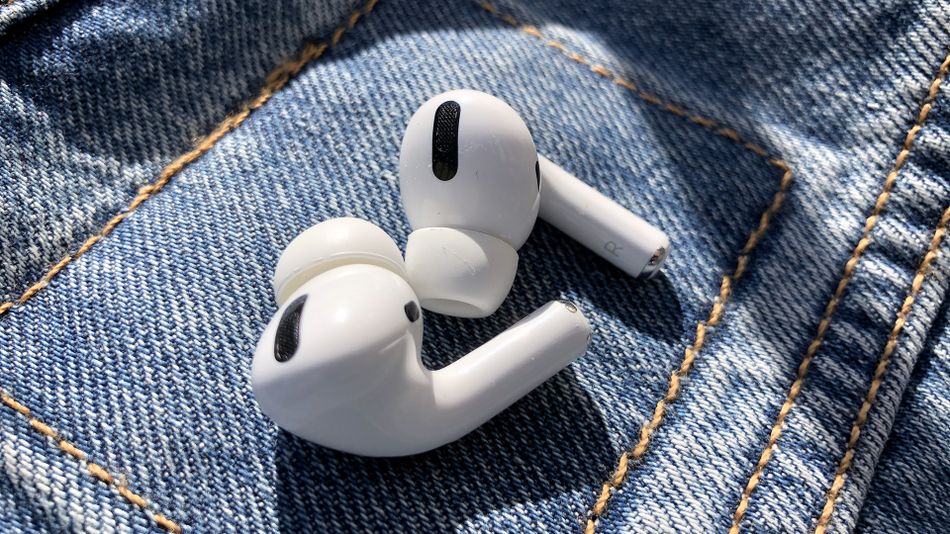 Apple's new AirPods Pro are much pricier, and much better, than previous versions.(IMAGE: KARISSA BELL / MASHABLE)

It's been three years since Apple launched its first AirPods. In that time, the plastic wireless earbuds have gone from widely derided (remember the memes?) to so popular that seemingly every other tech giant is trying to come up with its own version.

But there's a reason why most haven't been able to come close. Not only does Apple have a pretty comfortable head start, but the things that make AirPods so popular — their size and simplicity for iPhone owners — have proven almost impossible to match. Not to mention, no other company has the full power of Apple's branding machine behind it, which has helped transform the buds into a veritable status symbol.

At $249 — $100 more than the original — expectations for the "Pro" versions are understandably high. But after wearing them for almost an entire day, I feel that Apple has more delivered on this promise.

AirPods Pro not only improve over previous versions in just about every way, the biggest improvements — noise cancellation, comfort, and sound quality — are big enough that even the most hardened AirPods skeptics will be hard-pressed to complain.

New AirPods, who this

If you were disappointed that Apple's second-generation AirPods were almost completely identical to the original buds, then you'll appreciate that the "Pro" AirPods got a total redesign. Everything from the shape of the case to the size of the actual earbuds has changed.

The first thing you notice is the case. One of the best things about AirPods (and the one that has proved most difficult for others to copy) is the size of its charging case, which is often compared to dental floss.

The AirPods Pro case is a bit larger than its predecessor but not by much. It's shorter and wider, but the thickness is about the same (and like Apple's second-gen AirPods, it also charges wirelessly or via a lightning cable). Some might be a little disappointed with the added size, but it's really not enough to make much of a difference. It’s still easy to slip into just about any pocket, including the small “watch pocket” on most jeans. 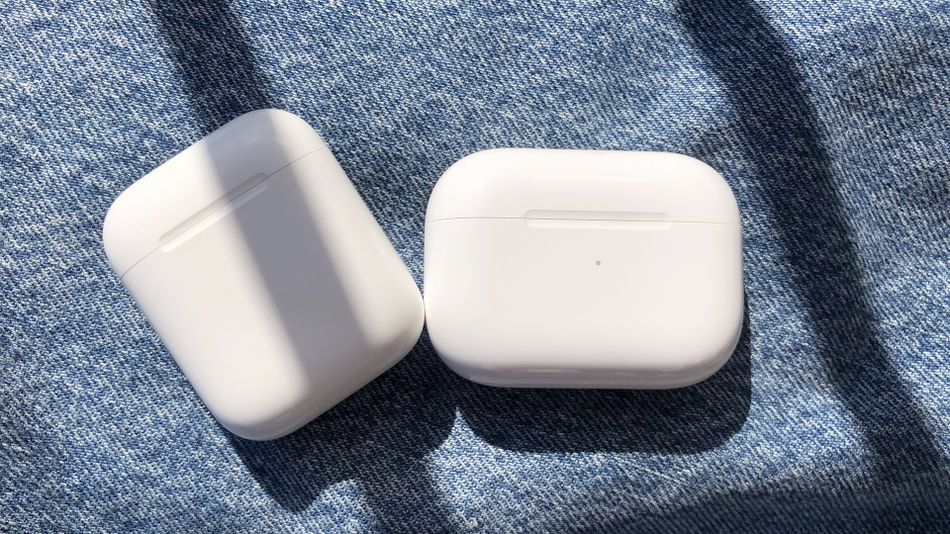 The AirPods Pro case is shorter and wider than the original, but not much bigger overall.(IMAGE: KARISSA BELL / MASHABLE) 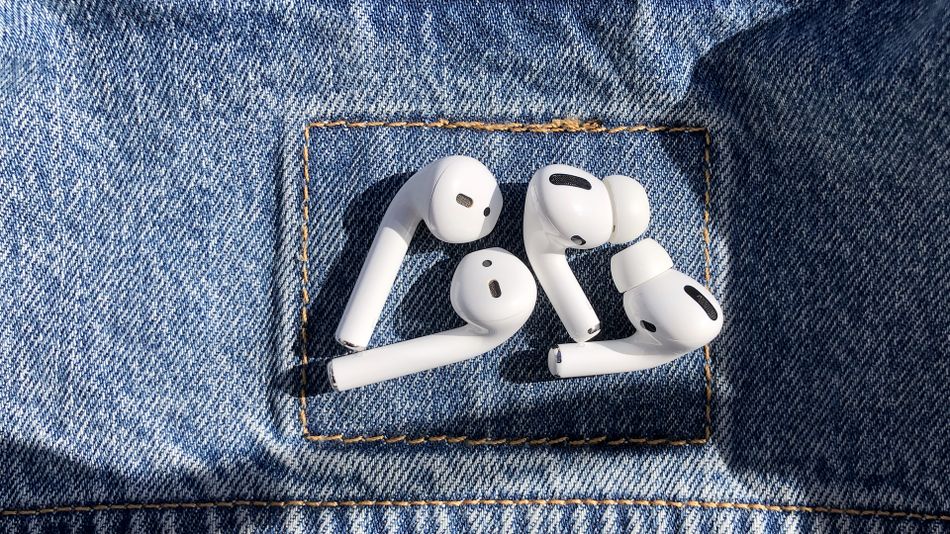 A set of original AirPods (left) and AirPods Pro (right), which are shorter and wider.(IMAGE: KARISSA BELL / MASHABLE)

Most importantly, it provides an additional 24 hours of battery life, which is good because Apple's new noise cancellation will drain your AirPods battery a little bit faster than before. I haven't had enough time to put Apple's battery life claims to the test yet, but so far both the buds and the charging case have performed as expected.

Like the case, the buds themselves are also shorter and wider. The ear tips have soft silicone covers, similar to in-ear buds made by companies not named Apple, and the tips are much shorter than older AirPods.

I'll talk more about fit in a minute but just to get it out of the way: yes, these are extremely comfortable. Probably the most comfortable in-ear buds I've ever worn. 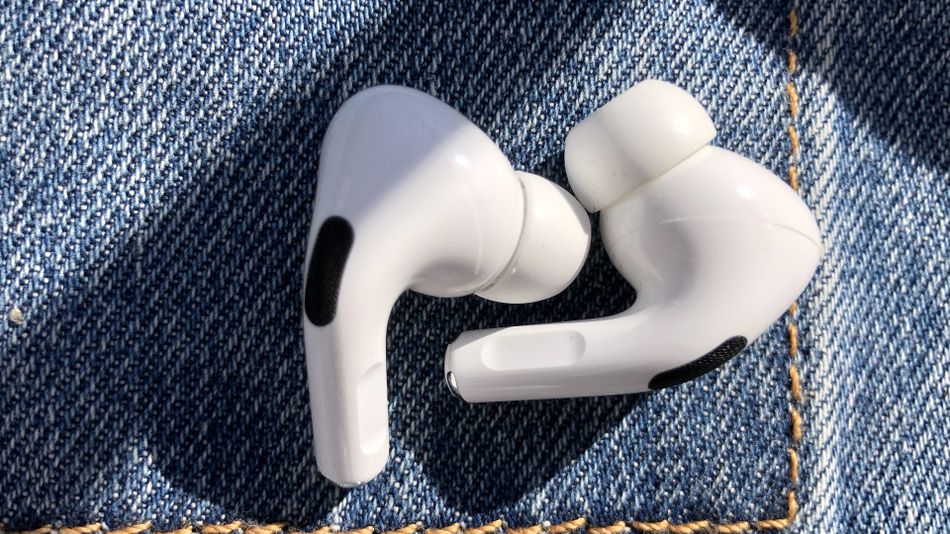 Instead of tapping, you can control music playback by squeezing the notches on the end of each earbud.(IMAGE: KARISSA BELL / MASHABLE)

Apple has also changed up the controls. Instead of tapping on the back to answer calls or pause your music, you now squeeze the end of each bud to control playback or answer calls. The end of each bud has a small notch with what Apple calls a "force sensor," which helps you feel where to grab onto the bud.

A single squeeze will play/pause, a double squeeze will skip to the next track, and three will skip back. If you squeeze and hold, you can toggle between noise cancellation and "transparency" mode (more on both in a minute).

It took me about half a day to get used to these new gestures, but it’s pretty intuitive overall. My main concern is that it’s not quite as easy to to do while running or working out since it takes a little bit longer to hold and squeeze than it does to tap. But I don’t expect it will be a big problem in most situations.

All these design changes also mean that AirPods Pro fit and feel much different than previous versions (in a good way!).

I have small ears, and I’ve struggled with just about every pair of earbuds with round tips, no matter what size cover I put on. Not so with AirPods Pro, which have the same angled design as EarPods and AirPods. And the removable silicone tips work a bit differently than other types of earbuds. Instead of having to mash it down onto a plastic tip, each cover snaps into place with a satisfying "click." 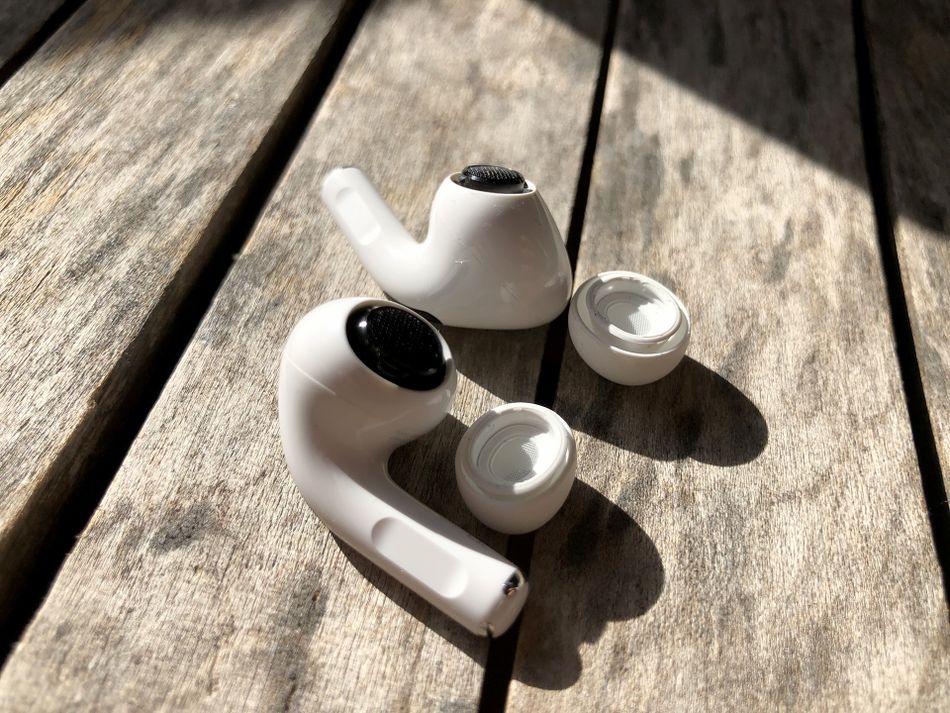 The earbuds come with removable tips that are surprisingly comfortable.(IMAGE: KARISSA BELL / MASHABLE)

And, because there's no plastic piece extending into your ear canal, the buds are much more comfortable to leave in for long periods of times. Though I find my original AirPods pretty comfy, my ears can definitely get a bit sore after leaving them in for several hours at a time. Not only has that yet to happen with my AirPods Pro, my regular AirPods now feel significantly less comfortable by comparison. Thanks a lot, Apple.

Getting the right fit is about more than just comfort, though. Apple's new noise cancellation feature also requires a tight seal in order for it to be really effective. 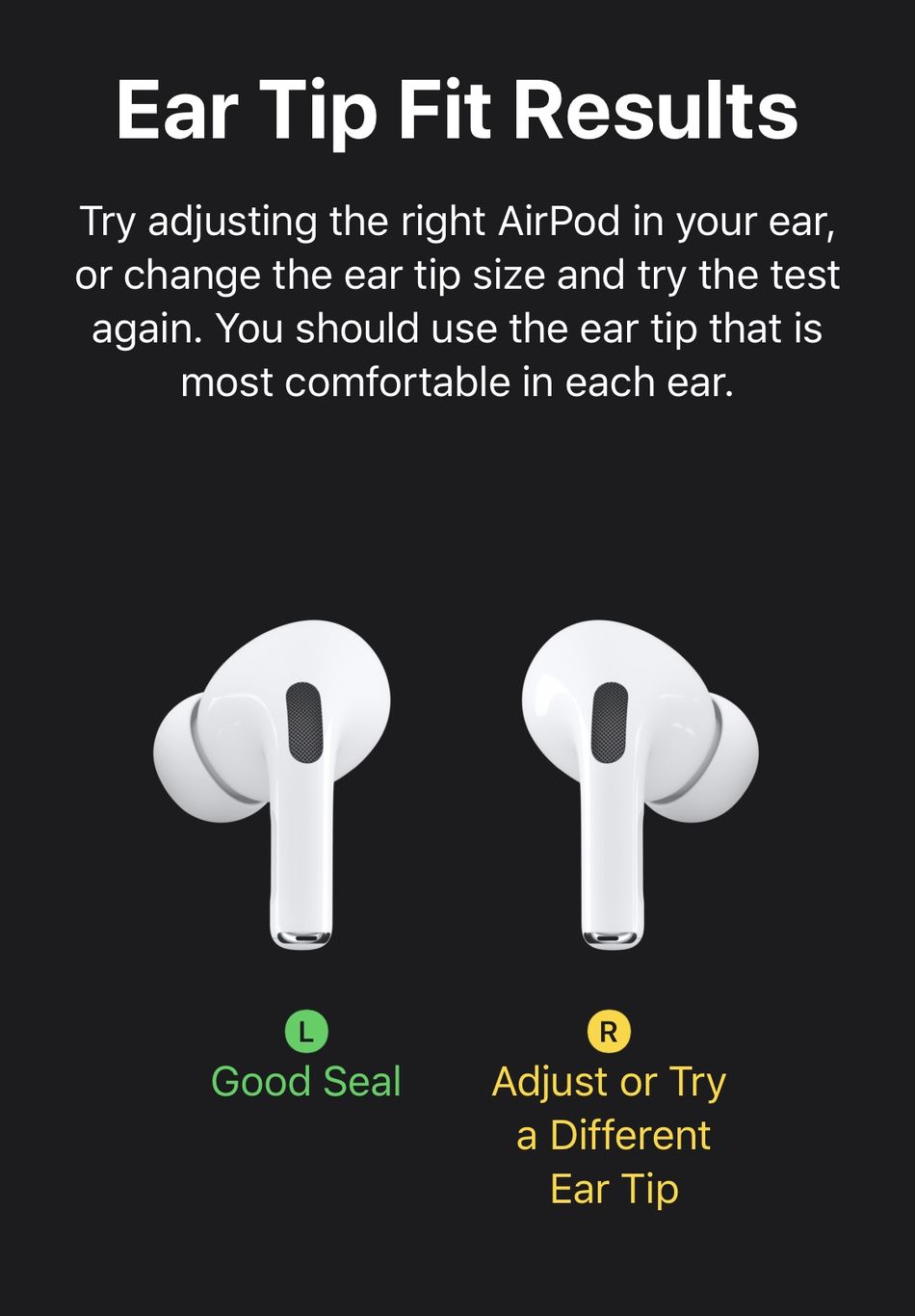 The results I got when I purposely left one bud loosely dangle in my ear.(IMAGE: KARISSA BELL / MASHABLE)

Apple has also created an "ear tip fit test" which can help you choose the right size tip by checking whether the buds are sealing properly in your ear. The test is pretty simple. You listen to a short music clip and get a quick assessment of whether they fit properly. The "test" feels a little bit gimmicky (I was able to successfully get a "good fit" result with each sized tip, though it failed when I purposely had the bud too loose) but Apple says it conducts some pretty sophisticated analysis in order to test whether or not you're getting the best sound.

Apple made other improvements to make the AirPods Pro more comfortable. While other in-ear buds that form a seal can create an uncomfortable amount of pressure, AirPods Pro have a venting system that allows air to travel through the bud itself to minimize this type of pressure. I've always been particularly sensitive to this, so I definitely noticed the lack of pressure compared with other buds I've tried. 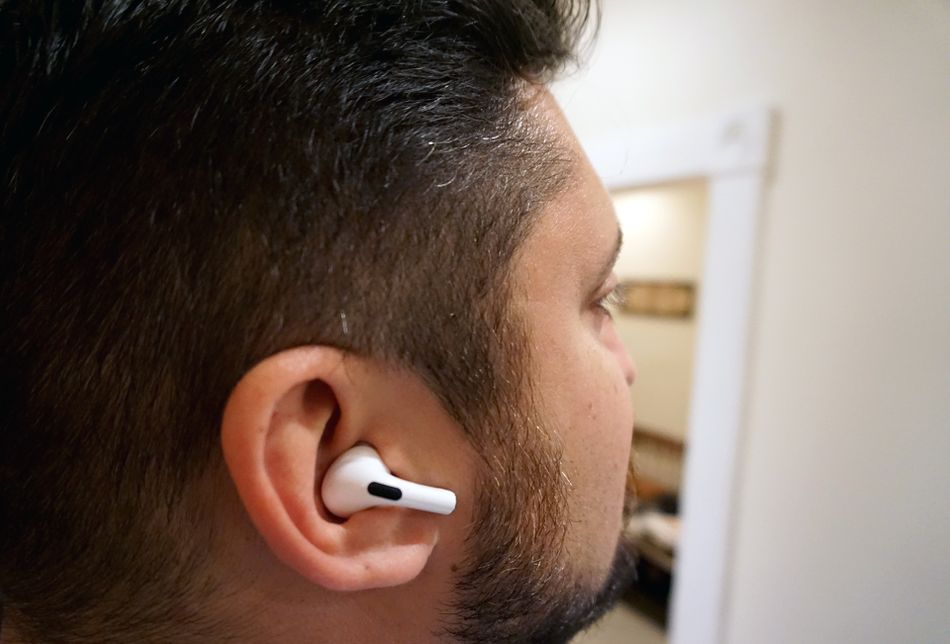 AirPods Pro use a venting system to reduce the pressure that can build up inside your ear.(IMAGE: KARISSA BELL / MASHABLE)

Still, I know fit is something that’s different for everyone, and I’ve heard from a lot of people over the years who say AirPods either won’t stay in their ears or are too uncomfortable to wear. While that's never been my experience with AirPods, I do feel the design changes with AirPods Pro should resolve most of these issues. The new tips are not only more comfortable, but the fit is much more snug.

Another benefit of the new design: they’re much easier to clean. While earwax and other gunk could easily build up in the many crevices of the older design (gross, I know), the removable tips should be much easier to keep clean. That said, you might not want to pull them off too frequently.

It takes a surprising amount of force to yank the tips off. And while this means they shouldn't slide off unintentionally, I do wonder how well they'll hold up over time. In the first 24 hours I had mine, I pulled the tips off several times and I've already started to notice signs of wear on the silicone. I'm guessing most people won't be pulling them off as frequently, and you can buy replacement tips from Apple for $3.95, but it's still annoying to have to worry about.

Okay, let's talk about the most important feature: noise cancellation. AirPods Pro have active noise cancellation, meaning they are constantly adjusting based on your surroundings in order to tune out ambient noise. It's a pretty complex process that can dynamically adjust 200 times a second, according to Apple.

In practice, the noise cancellation is definitely impressive, especially for the size. That said, you shouldn't expect the near total silence you might get with higher-end, over-ear headphones from companies like Sony or Bose.

But AirPods Pro are still quite good at tuning out noise, though it does seem to vary a bit based on the type of noise.

I walked by a (very loud) construction crew in front of our office building and I couldn’t hear the jackhammering at all until I was just a few feet away. But when I was in the office I could easily hear the (muffled) voices of coworkers chatting across the room. While walking down a busy street in downtown San Francisco, they tuned out pretty much all of the traffic noise. 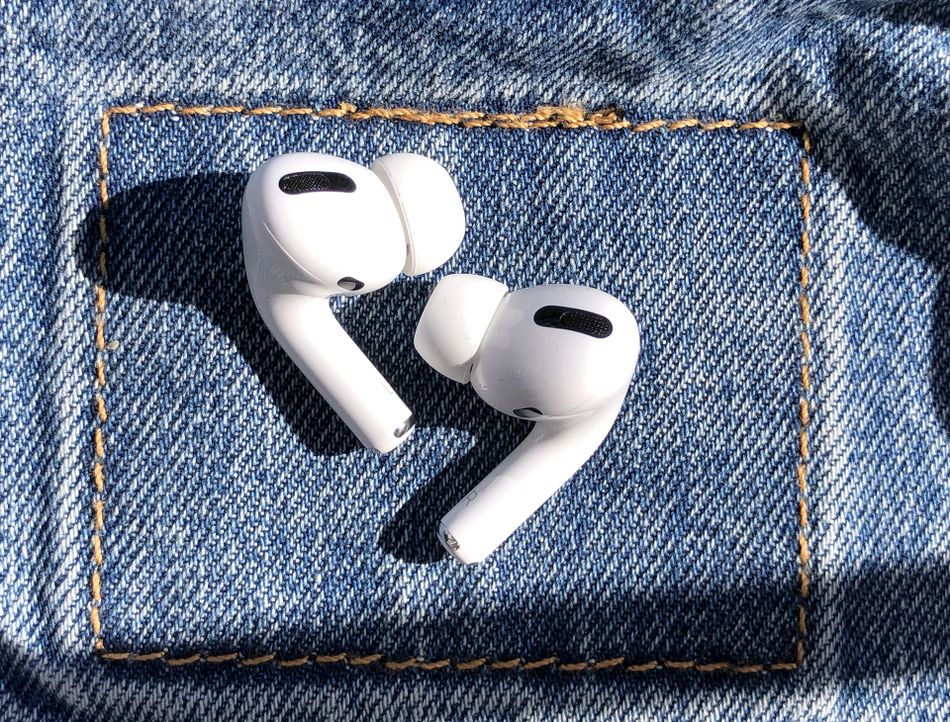 All that said, these are still small, in-ear buds we’re talking about. So the noise cancellation won’t be as complete as what you get with large over-ear cans. As someone who regularly flies with just my normal (non-noise canceling) AirPods, I’d be more than comfortable hopping on a long flight with just AirPods Pro. But if you're expecting total silence, or you're used to flying with big, over-ear noise-canceling headphones, you'l probably want to stick with those.

The upside, of course, is that AirPods are far easier to travel with. For me, the tradeoff in noise cancellation is worth it to not have to lug around big headphones, but I know this won't be true for everyone.

All this means that AirPods Pro sound noticeably better than my first-generation AirPods. Not only does noise cancellation make listening to music more immersive, but the sound is clearer and brighter overall. I don't know how else to describe it: everything just sounds really good.

One of the only big drawbacks is the price. At $249, the buds are Apple’s priciest AirPods yet. And if you upgraded to Apple’s second-gen AirPods last year, another $249 is probably hard to justify. But if you’re someone who tends to wear your AirPods several hours a day, then the benefits of better sound and noise cancellation are a no-brainer.

ESTELLE OCTOBER 3, 2019 Halloween is approaching fast. One can just about taste the trick or treat candy and…