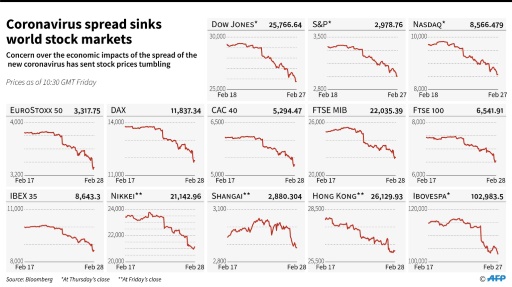 Graphs of stock markets around the world which have fallen sharply during the last week on concerns over the economic impacts of the coronavirus spread. Photo: AFP

PARIS —— Markets have shuddered as the coronavirus spreads worldwide, but analysts doubt it will plunge economies into a crisis like the one that followed the 2008 Lehman Brothers investment bank failure.

Where will the market slide end?

Stock markets held up fairly well in the first weeks of the coronavirus outbreak in China, but fell sharply when a large number of cases were reported in Italy. In one week more than half a year of gains were wiped out in a brutal swing reminiscent of the financial crisis more than a decade ago.

Yet analysts note that such abrupt market corrections -- a swift drop of at least 10 percent from a recent peak -- have happened nearly every year over the past decade.

But the shock wave differs from those felt in 2008, which ravaged the financial sector before paralysing the broader economy, and in 2000 when the internet bubble burst.

This time, stock markets faced "an external shock," Hezez said. "If investors do not see a political, medical and monetary response, the market could fall lower still," he forecast.

Christian Parisot at the Aurel BCG brokerage felt however that "central bankers will keep us from arriving at that point."

And the real economy?

Growth forecasts for the first quarter of 2020 and the year as a whole have been lowered by most economists, and that is based on a fairly limited impact from the virus leading to a rebound in the second quarter.

The slowdown will clearly be sharper in China. The International Monetary Fund (IMF) has revised its growth forecast for the world's second biggest economy down from 6.0 percent to 5.6 percent, and Moody's expects it to be weaker still, at 5.2 percent.

That is certain to affect other countries, so Swiss bank Credit Suisse has trimmed its 2020 global growth forecast by 0.2 percentage points to 2.2 percent.

Countries such as Germany that export a lot to China will probably be hit hard, and some others could fall into recession.

Japan is a case in point, given a drop in output already late last year, while a mini-rebound in Italy, the European country hit hardest by the virus so far, now appears to be in trouble.

Across the Atlantic however, growth in the United States is fairly strong, owing to resilient consumer spending on the back of "solid job growth and real wage gains," noted Sara Johnson, director of the global economic unit at IHS Markit.

In 2009, the world suffered an overall recession, with global gross domestic product (GDP) contracting by more than three percent.

Could things get worse?

"The longer this goes on the more people will become afraid, which will weaken confidence," said Sylvie Matelly, deputy director of the French Institute for International Relations and Strategic Affairs.

"There will be quarantines or cities blocked, and that means less economic activity and more ruptures in supply chains," she added.

Johnson felt that "the danger is that the outbreak spreads more widely and rapidly than we expected, leading to production shutdowns and travel restrictions outside of the Asia Pacific region."

While she believes that "financial markets have over-reacted to the downside risks to the global economy," Johnson noted there is a danger "that reaction could have adverse consequences" to it, nonetheless.

Matelly said that could happen if the market panic sparked runs on banks in China or other countries hit hard by the coronavirus where government finances are fragile.

"That is the scenario that would lead to a very serious economic crisis," she warned.

But it's not certain such a scenario will come to pass.

"The hypothesis of a quick rebound" in the global economy has been discounted, said Christian Parisot.

But "that does not call into question the hypothesis that things will improve" even if the outbreak wreaks havoc with the economy in the first half of the year and not just the first quarter," he added.