France closes the Louvre as virus spreads to new fronts

By JOHN LEICESTER and COLLEEN BARRY 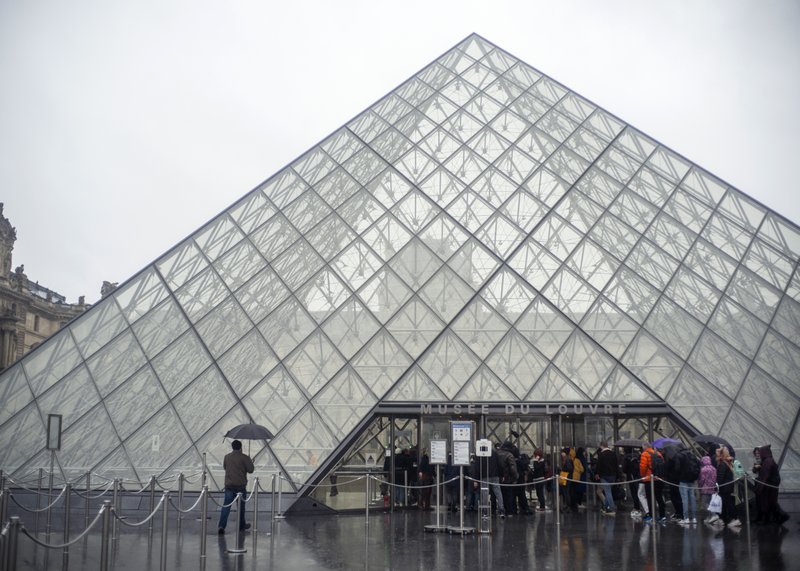 Tourists stand outside the Louvre museum, in Paris, France, Sunday, March 1, 2020. The spreading coronavirus epidemic shut down France's Louvre Museum on Sunday, with workers who guard its trove of artworks fearful of being contaminated by the museum's flow of visitors from around the world. (AP Photo/Rafael Yaghobzadeh)

The virus has spread to more than 60 countries, and more than 3,000 people have died from the COVID-19 illness it causes.

New battle fronts in the battle opened rapidly, deepening the sense of crisis that has already sent financial markets plummeting, emptied the streets in many cities and rewritten the routines of millions of people. More than 88,000 have been infected, on every continent but Antarctica.

Italian authorities said the number of people infected in the country soared 50% to 1,694 in just 24 hours, and five more had died, bringing the death toll there to 34. Cases in France jumped to 130, an increase of 30 in one day.

China, where the epidemic began in December, reported 202 new cases in its update Monday, the lowest increase since Jan. 21. The city of Wuhan had most of the new cases but also saw 2,570 patients released, continuing a trend that frees up patient beds in the prefabricated isolation wards and hastily built hospitals in the area where the disease has hit hardest.

That brings China’s totals to 80,026 cases, with 2,912 deaths, the vast majority in Wuhan and surrounding Hubei province, which still accounts for about three-quarters of the world’s cases.

South Korea has the world’s second-highest cases with 4,212, mostly in and near the southeastern city of Daegu. It has reported 22 deaths. Iran’s death toll climbed to 54 and its cases jumped overnight by more than half, to 978.

Cases in the U.S. climbed to at least 80 with two deaths, both in Washington state.

While the virus has caused serious illness mainly for the elderly and those with existing health problems, most have had mild illness and some infected apparently show no symptoms at all.

But attempts to contain the spread of the virus have been far-reaching.

Sports teams have played in deserted stadiums in Japan and South Korea after leaders discouraged public gatherings. Tourist attractions across Asia, Europe and the Mideast were closed or deserted. Islam’s holiest sites have been closed to foreign pilgrims. And governments have closed schools and encouraged working from home.

Adding to global travel curbs that have sharply cut visitors to places with outbreaks, the U.S. government advised Americans against traveling to the two northern Italian regions with growing caseloads, among them Lombardy, which includes Milan. Major American airlines began suspending flights to Milan. American Airlines will waive fees for changing all flights over the next two weeks.

The travel restrictions against Italy and the rising alarm in France could deal a heavy blow to the countries’ tourism industries. Spring, especially Easter, is a hugely popular time for schoolchildren to visit France and Italy.

“We had already registered a slowdown of Americans coming to Italy in recent days,” Bernabo Bocca, president of Italy’s hotel association, said in a statement Saturday. “Now, the final blow has arrived.”

Tourism accounts for 13% of the economy in Italy, with its art museums, archaeological sites and architectural treasures. More than 5.6 million Americans visit Italy every year, representing 9% of foreign tourists.

The United Nations said Sunday it is releasing $15 million from an emergency fund to help countries with fragile health systems contain the virus.

“We must act now to stop this virus from putting more lives at risk,” U.N. humanitarian chief Mark Lowcock said. The aid “has the potential to save the lives of millions of vulnerable people.”

In France, the archbishop of Paris told parish priests to put the Communion bread in worshippers’ hands, not in their mouths. In South Carolina, the Roman Catholic Diocese of Charleston asked its parishioners to not drink from the Communion cup or shake hands during the sign of peace.

French officials also advised people to forgo the customary kisses on the cheek upon greeting others.

The Louvre, home of the “Mona Lisa” and other priceless artworks, closed after workers expressed fear of being contaminated by the stream of visitors from around the world. Staffers were also concerned about museum workers from Italy who had come to the Louvre to collect works by Leonardo da Vinci that were loaned for an exhibition.

The Louvre, the world’s most popular museum, received 9.6 million visitors last year, almost three-quarters of them from abroad.

“We are very worried because we have visitors from everywhere,” said Andre Sacristin, a Louvre employee and union representative. “The risk is very, very, very great.” While there are no known infections among the museum’s 2,300 workers, “it’s only a question of time,” he said.

The shutdown followed a government decision Saturday to ban indoor public gatherings of more than 5,000 people.

Among the frustrated visitors was Charles Lim from Singapore. He and his wife, Jeanette, chose Paris to celebrate their first wedding anniversary and bought tickets in advance for the Louvre.

“We waited for about three hours before giving up,” he said. “It was incredibly disappointing.”

Why Do We Feel Compassion and Empathy For Specific Animals? Written By Marc Bekoff Ph.D. New research answers…