Curfews have a disturbing racist history 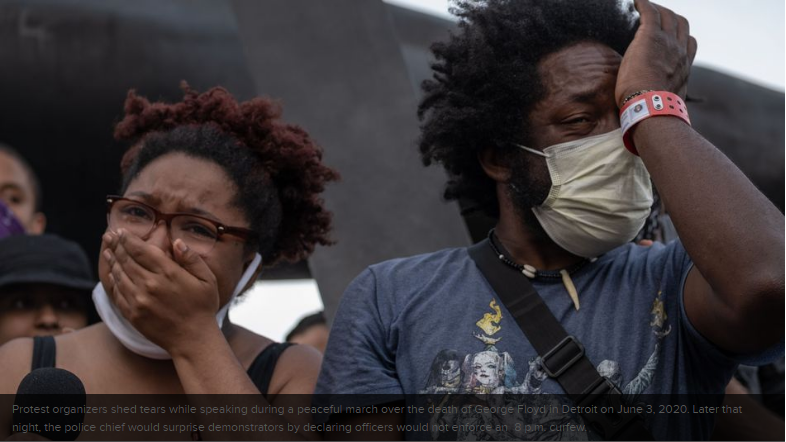 The curfews that rolled out across the country this week in reaction to police brutality protests mark a tragic milestone: Not since the assassination of Martin Luther King Jr. have so many cities ordered simultaneous curfews.

And what have we seen come from these sweeping restrictions placed on more than 60 million people across roughly 200 cities? Confusion and chaos.

While law enforcement sees curfews as a tool to restore order, critics argue they can have the opposite effect, leading to more confrontation. They also have a deep, racially-tinged history.

“It seems like in American history curfews have often been enforced when the black community wants its voice heard,"said Tyler D. Parry, an assistant professor of African American and African diaspora studies at University of Nevada, Las Vegas.

It's been decades since such harsh curfews have embroiled the two most populous cities in the country. In Los Angeles, similar curfews were last put in place after the officers who savagely beat Rodney King were acquitted of excessive use of force and assault charges in 1992. In New York, a 10:30 p.m. curfew can be traced back to Harlem riots that followed the shooting of a back soldier by a white police officer. New York's curfew started at 11 p.m. earlier in the week, but was later pushed up to 8 p.m.

In Los Angeles County on Monday, a jumble of curfew times — starting as early as 1 p.m. in the affluent, mostly white cities of Santa Monica and Beverly Hills — and blaring emergency phone alerts boggled residents throughout the sprawling metro area. In Chicago on Saturday, a curfew was set for 9 p.m. with just 35 minutes notice.

While diverse crowds have staged nationwide protests following the death of George Floyd after a Minneapolis police officer kneeled on his neck for nearly nine minutes, that doesn't erase the fact that historically, curfews have been used to curb black mobility. 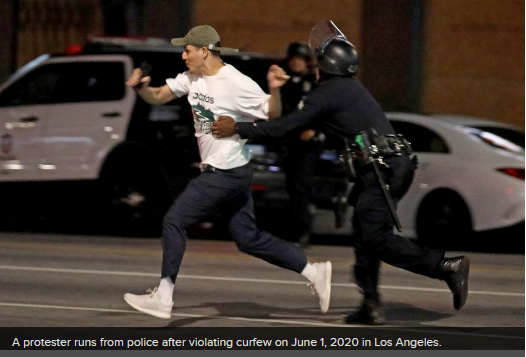 "I find it to be very heartening for me when you have a larger turning point in a protest, when the masses come to identify with the oppressed," said Zachariah Mampilly, the co-author of Africa Uprising: Popular Protest and Political Change.

When Parry reflects on curfews, he hearkens back to Jim Crow laws enacted in the late 19th and early 20th century to control black freedoms because black people were perceived as a threat. "Sundown towns" also set unofficial racist curfews for black people even into the 1960s; they were infamous for posting signs that warned "Don't let the sun go down on you." Going back even further, harsh curfews were commonly used to control slave populations, he said.

In 1909, Mobile, Alabama created a 10 p.m. curfew for black people. A decade later during the "Red Summer" of 1919, more than a dozen cities imposed curfews as black people organized in response to white vigilante violence. During civil rights protests in the 1950s and 1960s, city officials from Birmingham to Philadelphia enacted curfews. During the Watts riots in 1965 in Los Angeles, curfews were put in place and the National Guard was deployed. In Cincinnati in 2001, after a black man was shot by a police officer, days of unrest followed, as did curfews. 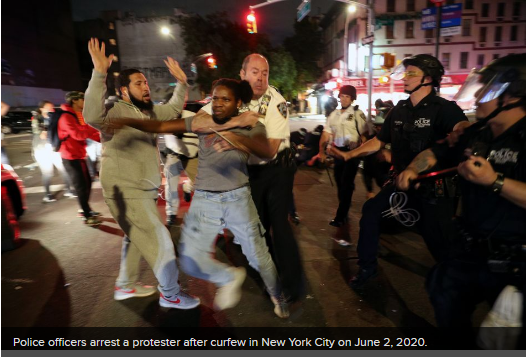 To break the current curfews has become its own form of civil action leading to police confrontation, as well as mass arrests of those simply marching and those destroying property and looting.

In Los Angeles, as of Tuesday, 92 percent of the 2,700 protest arrests were for breaking curfew. People have been detained for more than 7 hours, some forced to urinate on themselves without bathroom access, said Kath Rogers, executive director of the National Lawyers Guild of Los Angeles. In cities across the country, breaking curfew comes with a hefty fine, too.

After curfew, scenes on social media emerged of people chanting "Fuck your curfew, being black is not a crime" in New York and dancing in Oakland. When the Detroit police chief decided to not enforce a planned 8 p.m. curfew Wednesday night, protesters cheered and held a "victory march." 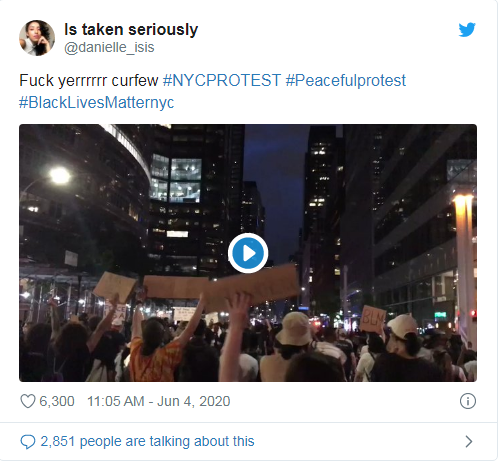 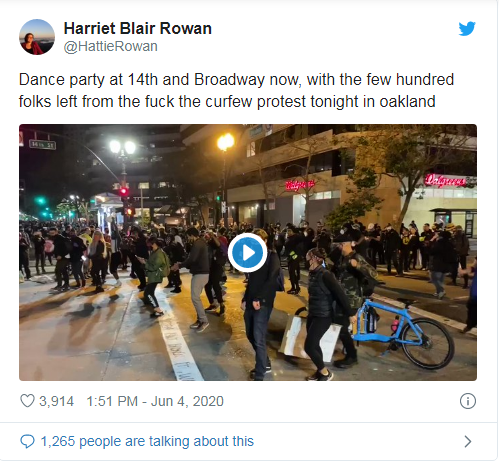 Reports of a Washington, D.C. man opening his door to dozens of demonstrators Monday night as they were rushed by police ricocheted across Twitter. The crowd welcomed by a stranger around 10 p.m. stayed until about 6 a.m., with police waiting outside the home. For those inside, it felt like a hostage situation.

Of course, curfews haven't been limited to black-led protests. They were also enforced during the economic inequality protests of the Occupy movement of 2011 and after anti-globalization demonstrations in 1999 following a World Trade Organization meeting in Seattle. Decades later, though, the former police chief residing over the controversial response to the WTO march, had deep regrets. After the crackdown on Ferguson protests in 2014 following Michael Brown's fatal police shooting, Norm Stamper asked "When will we ever learn?” The Justice Department later found law enforcement tactics in Ferguson made the unrest worse.

“Don’t tear gas nonviolent and not-threatening protesters,” Stamper told the Los Angeles Times back then. Learn from my mistakes, he implored.

But after curfew this week, largely peaceful crowds were hit with tear gas and rubber bullets to clear the streets. In Los Angeles, business owners complained the police were ignoring looters in favor of trapping curfew breakers. The forceful response has widened the divide between protesters and police rather than bridge it. For every photo of a protester hugging a cop, there has been a photo of a bruised face or of people running in a cloud of smoke. And now the CDC warns that chemicals used by police to disperse crowds causes coughing, which may be spreading COVID-19.

Who controls the streets

"The real challenge when you are engaging in protests is who controls the streets," said Mampilly, who is also the Marxe Chair of International Affairs at City University New York. "As the protesters are able to demonstrate they have the power to take over the streets then more and more people will join the protests. On the other side, the government's goal is the opposite. They want to demonstrate that they are the ones in control of the streets and so curfew is a very blunt and effective instrument to scare people from joining the side of the protesters." 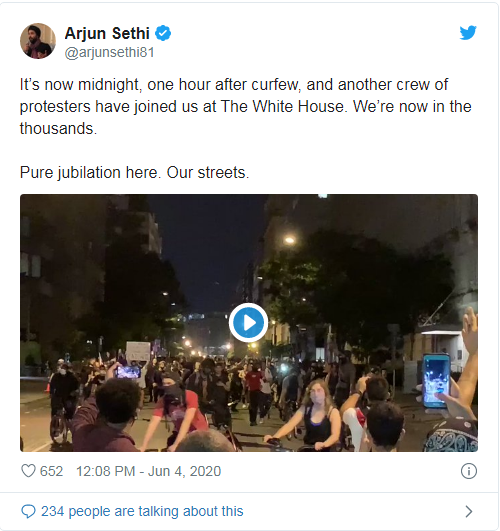 Government calls for curfews came after spurts of property destruction and violence collided with several nonviolent protests. Some marchers tried to unsuccessfully stop looters themselves. But they couldn't prevent hundreds of businesses from being vandalized in multiple cities, generally over the weekend and into Monday. Boarded up businesses stretch on for blocks in Minneapolis. However, as the week went on, protest activity, on a broader scale, was largely calm, even after curfews struck.

Activists have also underscored that the president's and other officials' focus on looting incidents ignores the deeper issues of police brutality. In addition, several videos on Twitter have shown white people breaking into storefronts. And white supremacists with assault rifles have filtered into protests in various cities, stoking chaos.

Still, blanket curfews are unconstitutional, argued the ACLU of Southern California in letters to the city and county of Los Angeles.

"We recognize that in the last few days some individuals have damaged and stolen property in areas where many others have engaged in peaceful protests, but that unlawful conduct cannot justify a state of emergency in the entire county that effectively places over 10 million people under house arrest for twelve hours every evening and morning," the letter reads. The ACLU of Alabama also pushed back when Birmingham expanded its curfew rules to ban demonstrations, marches, and vigils from public parks and streets.

Expansive curfews aren't unique to American protests. In African countries, curfews and other strategies to repress unrest have been exported from the United States, along with the military-grade weapons African governments use to control their own populations, Mampilly added. They've also been used in several U.S. cities to restrict youth movement after dark in an effort to curb crime. But research published in 2015 on Washington, D.C.'s juvenile curfew found it increased "the number of gunfire incidents by 150 percent in the marginal hours."

"Enforcing the curfew distracts police from doing other things," a co-author of the research told the Brookings Institution, a D.C. think tank. 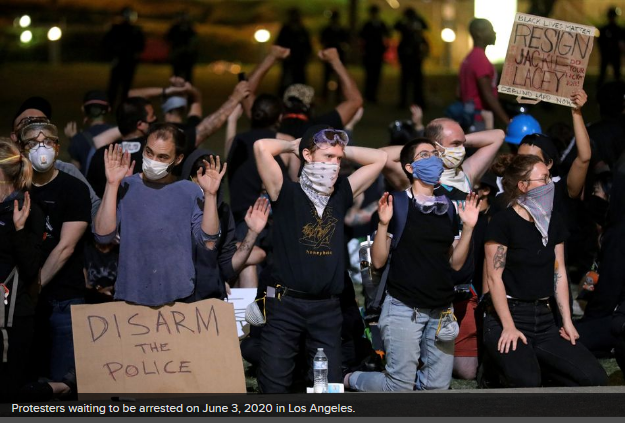 Parry takes the same tack: Rather then expend resources on arresting sign-toting, chanting protesters, use those resources to target the people doing the looting or to address the deeper problems of police brutality that sparked the calls for justice in the first place.

"This seems to just be trying to meet perceived violence with possibly even more violence that I'm not sure is particularly helpful for building police and community relations," he said.

By Thursday, some cities were beginning to relax curfews slightly. D.C., San Francisco, LA, and even Beverly Hills ended theirs. New York's and Philadelphia's are set to continue.

"If there's a piece of advice I can give city officials or state governors, I don't think curfews ever reflect well from the historical perspective," Parry said. "I think looking back, it looks somewhat cowardly that you would mobilize a police force to harass citizens and force them to go back home."

Why Are Yawns Contagious? By Anne Marie Helmenstine, Ph.D. Every person yawns. So do many other vertebrate animals,…