The Disney reboot doesn’t live up to its sparkling predecessor – but is nevertheless a ‘solid tween movie’, writes Nicholas Barber.

Disney’s Mulan is a masterpiece: entertaining, sparklingly funny, striking in its use of artistic angles and imagery, and bold in its feminism and its positive representation of Asian characters. But that’s enough about the cartoon that came out in 1998. Let’s move on to the live-action remake, which is in the unenviable position of being compared to its splendid predecessor. What’s more, this Mulan is being released after months of waiting – the original release date was March – and can be seen for a hefty extra charge on Disney’s new streaming platform, Disney+. It is also the most expensive film ever to have a female director, the first Disney film to have an entirely Asian and Asian-American cast, and the first of Disney’s live-action remakes to have a PG-13 rating in the US. Niki Caro’s film is a well-constructed family-friendly wuxia drama, with bright colours, grand scenery, and commendable themes. But it’s best enjoyed if you’re expectinga solid tween movie rather than a monumental cinematic landmark.

As in the cartoon, which was based in turn on a Chinese legend, a young woman named Mulan (Liu Yifei) lives with her family in an idyllic rural village where the clothes are all peasant-chic haute couture and the greatest danger she faces is being frowned at by the local matchmaker. But a band of Rouran raiders led by the scarred Bori Khan (Jason Scott Lee) keeps slaughtering Imperial troops, and so the Emperor (a dignified Jet Li) decrees that one man from every family in China must join his army. The trouble is that the only man in Mulan’s family is her infirm father (Tzi Ma). To save him from certain death, Mulan disguises herself in his red armour and rides off to the army training camp where she pretends to be a man. It seems unlikely that the Emperor would conscript a pensioner who can barely totter across a room without a walking stick, let alone charge into battle, but the film would have been a lot shorter if anyone had acknowledged that.

Fans of the cartoon will be dismayed to hear that the remake omits the songs, the jokes, and the talking dragon. Caro and the screenwriters have gone for a humourless and even sombre tone, replacing all of the witty lines with portentous speeches about honour and loyalty. At times Mulan is almost a grown-up period drama, but ultimately it falls somewhere between two audiences. Children may be put off by the sight of flaming boulders being catapulted through the sky at our beleaguered heroes, while teens may notice that the awkwardness of a woman sharing a dormitory and even a bed with a bunch of sweaty men is handled with chaste discretion. Mulan winces when a towel slips from the waist of a comrades-in-arms, but otherwise the film is even more coy than the cartoon was. 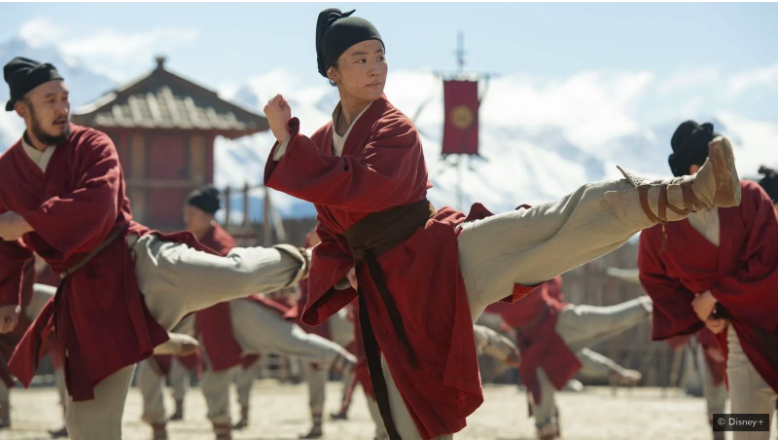 On the plus side, Caro and her team have added some energetic wire-fu action sequences in which the combatants sprint up walls and across tiled rooftops, and the camera flips on its side to keep up with them. There is nothing to match the gorgeous gravity-defying bouts in Crouching Tiger, Hidden Dragon or Zhang Yimou’s Hero (which starred Jet Li), but Mulan will serve younger viewers as an exciting introduction to martial-arts cinema. It’s certainly more violent than most Disney films, although parents needn’t be worried. Dozens of unnamed soldiers are stabbed, but they all have too much honour and loyalty to bleed.

Another nice addition is that Mulan herself doesn’t join the army solely to save her doddering dad, but because she would prefer to swish a sword around than to stay home and get married, so Liu’s nimble moves strike a blow for women’s liberation as well as striking a blow against the Rourans. There is also a new layer of mysticism that owes as much to Star Wars and superhero movies as it does to Chinese folklore. Mulan isn’t just hiding her gender in the army, she is hiding away her spirit or ‘chi’, which here becomes a magical energy equivalent to the Force. When Mulan channels her chi, she can zip around with superhuman speed and grace. But while men with this Jedi-like talent are revered as warriors, women are reviled as witches, so that’s another reason why she has to stay in disguise. The film even gives her a Darth Vader substitute, a sorceress (Gong Li) named Xian Lang who recognises Mulan’s gifts and wants them to work together for Bori Khan. As villainous as he may be, explains the sorceress, he has promised her that when he rules China, she will no longer be an outcast.

The message is that women shouldn’t have to suppress their abilities and be subservient, but the film isn’t quite as progressive as that might suggest. Xian Lang’s spells are so powerful that it’s difficult to know why she doesn’t dispense with boring Bori and rule China on her own. And the inspiring proposition that Mulan should be proud of her chi-tastic skills is undermined by the idea that she should nonetheless use those skills to serve her country and/or her family. Any aspirations beyond that are not an option.

Not that Mulan minds. All she wants to be is a brave and dutiful soldier, and while that’s a laudable ambition, she might have been more engaging if she’d had a spark of rebellion or attitude. When the filmmakers removed her pet dragon, they took away most of her personality with it.