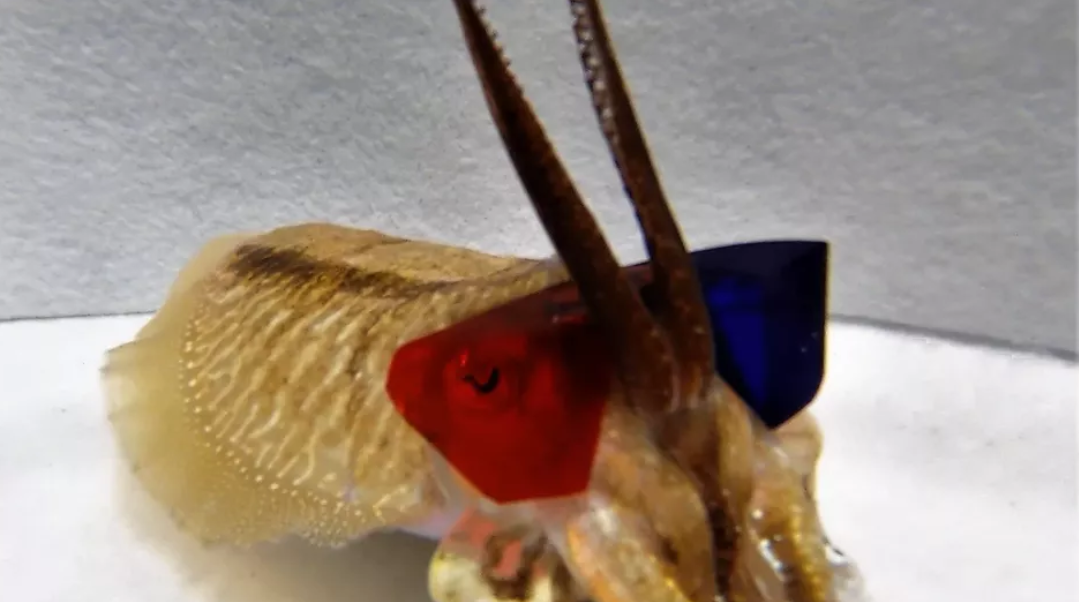 No, it's not watching a movie.IMAGE: UNIVERSITY OF MINNESOTA

It may seem like that cuttlefish is prepping to see The Rise of Skywalker but no, it's actually part of a research experiment.

A team at the University of Minnesota put 3D glasses on cuttlefish in order to learn more about their eyes and brains, specifically how both organs work together to catch prey. Like humans, cuttlefish utilize stereopsis, the scientific term for depth perception. Unlike humans, cuttlefish still hunt their prey — and stereopsis helps them do it. The cuttlefish strikes at its prey and must correctly guess how far away it is. If it's too close when it strikes, the prey will get spooked and move away; too far away, and it won't reach.

Researchers put glasses on the cuttlefish to test how the animal computes distance. They showed the cuttlefish images of two walking shrimp that were offset so the researchers could determine whether cuttlefish brains compare images between the left and right eyes in order to compute distance (this is stereopsis). Since the images were offset, the cuttlefish struck too close or too far — a sign they do indeed use stereopsis when hunting.

These findings are all explained in a paper published this week aptly titled, "Cuttlefish use steropsis to strike at prey."

It was not easy to get the cuttlefish to wear the glasses, according to Trevor Wardill. The assistant professor of ecology, evolution and behavior at the University of Minnesota and lead author of the paper, told CNN, "It took a lot of coaxing of the cuttlefish to make them wear their glasses... They'll want to play with it."

The effort was worth it, however, for the findings. "How the cuttlefish reacted to the disparities clearly establishes that cuttlefish use stereopsis when hunting," Wardill said in the university's article about the study.

Just because cuttlefish use depth perception like humans do, however, that doesn't make our brains similar. "While cuttlefish have similar eyes to humans, their brains are significantly different," said Paloma Gonzalez-Bellido, assistant professor. Cuttlefish brains are not segmented like human brains, for one. Furthermore, they can rotate their eyes to be front facing, which humans cannot do (at least, not yet).

The study is a step forward in learning more about the brains of cuttlefish and other invertebrates. They may be more complex than previous research realized, and that could tell us more about how different brains evolved to solve the same problem (in this case, depth perception helping capture prey).

There is more work to be done, sure, but that just means more tiny animals with tiny 3D glasses.