Why This ‘Unicorn Baby Dinosaur’ Is the ‘Cutest,’ ‘Weirdest’ Ever

The tiny sauropod had a horn on its snout and forward-facing eyes, unlike its adult counterparts 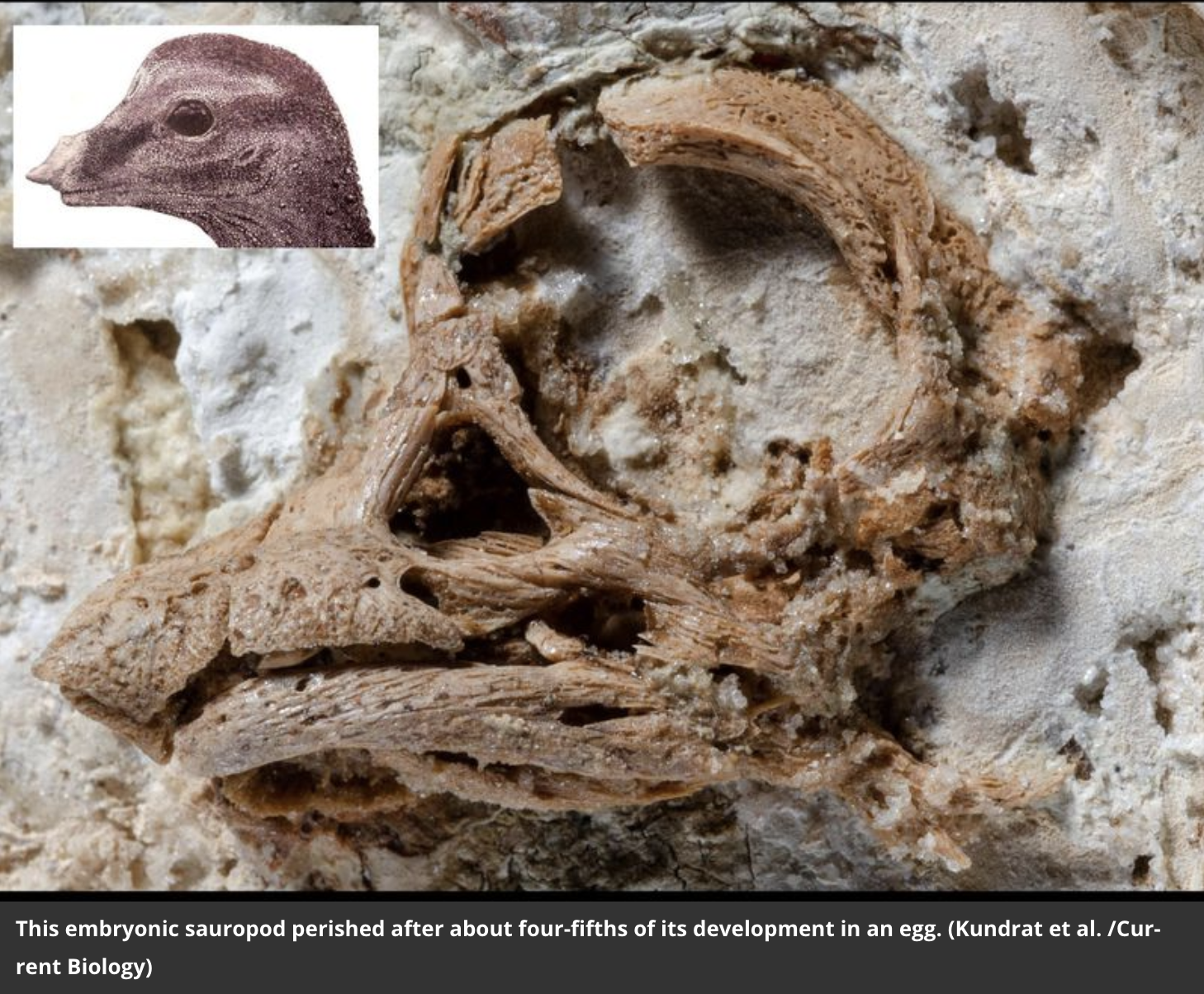 While newly studied fossil is puny—less than an inch and a half long—it was preserved in 3D, which allowed researchers to spot its unusual features, Will Dunham reports for Reuters. Unlike adult sauropod skulls, the embryonic fossil skull has a small horn on the tip of its nose, and its structure suggests the dinosaur’s eyes faced forward in its head.

“I was pretty floored. I thought it was an amazing discovery,” Adelphi University vertebrate paleontologist Michael D’Emic, who was not involved in the study, tells Lucas Joel at the New York Times.

The tiny skull is one of the best-preserved examples of a dinosaur embryo’s skull, but it was hidden from scientific research for about a decade. About 20 years ago, the skull was among several dinosaur eggs that someone smuggled from Argentina to the United States illegally.

A dealer brought the skull to freelance paleontological technician Terry Manning, Michael Marshall reports for New Scientist. And in 2011, the skull reached paleobiologist Martin Kundrát at the Center for Interdisciplinary Biosciencies at Pavol Josef Safarik University.

“When I had a look at this specimen, I quickly realized how unique this is,” Kundrát, lead author on the new research, tells the New York Times. “It was really amazing to see that such a specimen could really be preserved and still keep a three-dimensional position.” 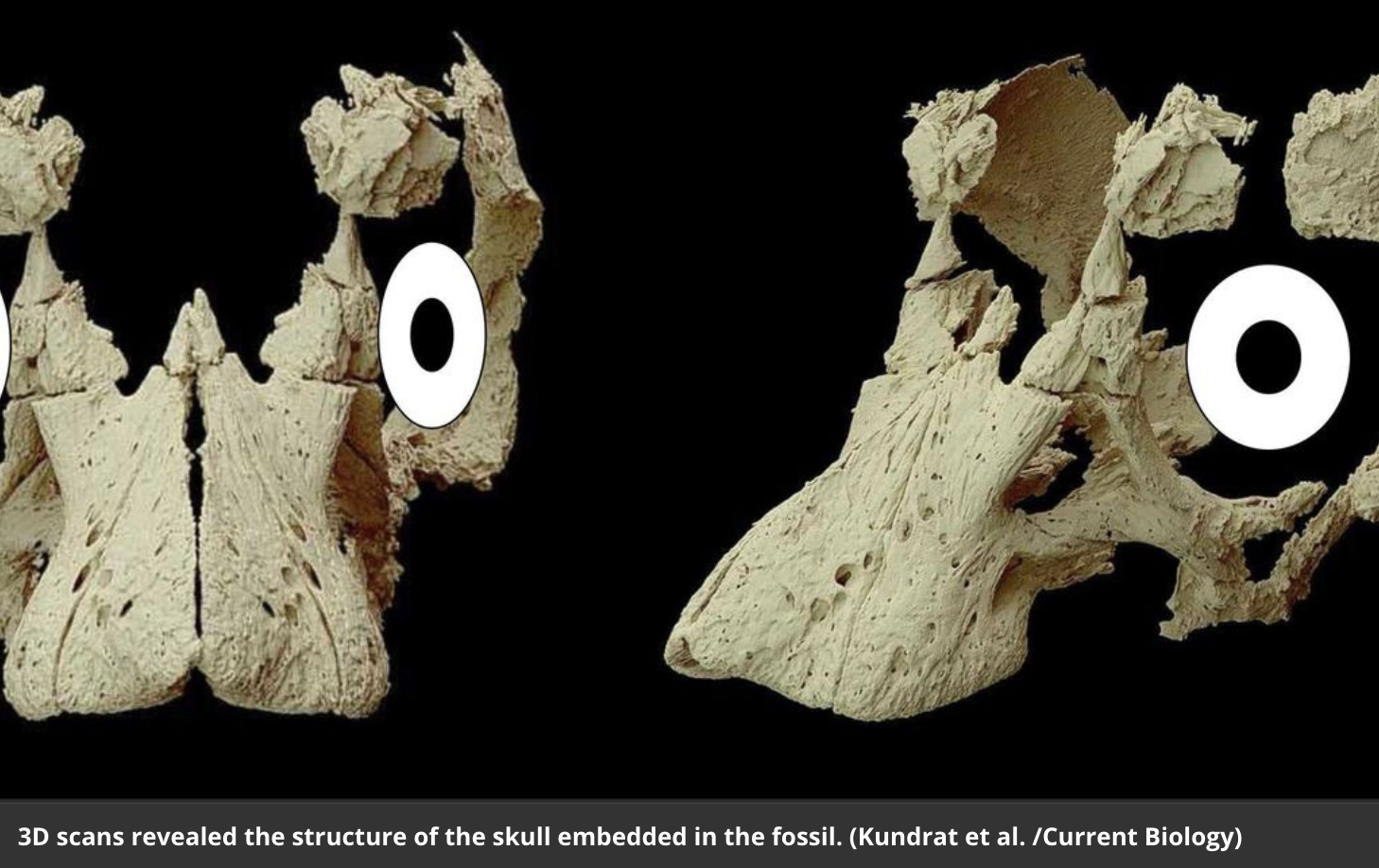 Adult sauropods are recognizable by their broad bodies, high-reaching necks and long tails. The largest species of sauropods, Argentinosaurus and Patagotitan, could grow to about 120 feet long and weigh 70 tons. The group includes the brontosaurus, which spent decades as the dinosaur that “never even existed” but was confirmed as a real dinosaur in 2015, National Geographic’s Ralph Martins reported at the time.

Based on the shape of the embryonic fossil’s skull, the researchers believe it belonged to a Tapuiasaurus, which grew to about 43 feet long, per Reuters.

“It is a bit unusual for a fossil to be represented just by a skull,” Kundrat tells Reuters, but the researchers aren’t sure what happened to the rest of the embryo’s body. “The specimen perished before completing its development. It had undergone only four-fifths of its incubation period.”

Kundrát took 3D scans of the fossil to visualize the entire skull without damaging the specimen or the fragment of eggshell that it was preserved in. The scans revealed a bumpy horn at the tip of the sauropod’s nose. Kundrát suspects that the horn functioned as either an egg tooth, which some baby birds use to puncture their egg shells from the inside when they hatch. Or, the horn may have been for defense.

“We do not have any evidence of titanosaurian parental care, so they were on their own from the very beginning,” Kundrát tells New Scientist.

The embryonic sauropod’s eyesight may have also been adapted to its independent youth. Based on the shape of the skull’s eye sockets, the researchers found that the dinosaur’s eyes would have faced forward like a human’s eyes. This led the researchers to suggest that young titanosaurians grow up in crowded, enclosed forests, where depth perception would help them dodge predators. By adulthood, the sauropods would move to open plains, where it’s more advantageous to have eyes on both sides of their heads.

“You could call it a unicorn baby dinosaur, because it has a single horn on its head. But unlike the mythical unicorn, where the horn is on the forehead, this dinosaur has a small bumpy horn at the tip of its snout,” University of Edinburgh vertebrate paleontologist Stephen Brusatte, who wasn’t involved in the new study, tells the New York Times. “This little embryo is one of the cutest dinosaurs I’ve seen, and at the same time, one of the weirdest looking.”

For now, the fossil remains in Los Angeles, the New York Times reports, but the researchers plan to repatriate the skull to Argentina when Covid-19 restrictions lift.

The ‘Batman Effect’: How having an alter ego empowers you By David Robson 18th August 2020 Thinking of yourself…

Are recessions always a bad thing?

Is there such a thing as a ‘good’ or ‘bad’ recession? By William Park How can the economic outlook…